Michael K. Carroll’s Pearson’s Peacekeepers: Canada and the United Nations Emergency Force, 1956-67 provides a thorough history of the first significant peacekeeping operation involving the United Nations (the United Nations Emergency Force [UNEF]), with a specific focus on Canada’s leading role.  With the Security Council crippled by Cold War politics, peaceful initiatives to thwart war were only possible through the General Assembly.  As a result, averting war in the Middle East was left to the tactful diplomacy of Canada, a respected medium world power that held economic and political sway because of an emerging Canadian nationalism that differentiated the country from its colonial roots and Superpower neighbour to the south.  Highlighting this new international role is what makes this book a significant addition to our understanding of Canada in the post-Second World War era. 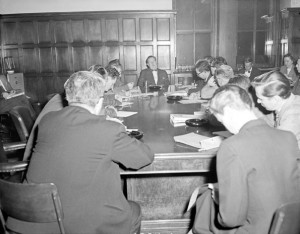 Pearson holding a press conference during the Suez Crisis of 1956.

Carroll opens with a skillful and evocative account of the complexities that led to the Suez Crisis and ultimately the creation of UNEF.  The second and third chapters convincingly illustrate how Canada, bolstered by its increasing international status, was able to lead and design an innovative solution to the threat of full scale war in the Middle East. This was achieved through the creation of a peacekeeping contingent led by middling powers from both the West and the Soviet Bloc.  Not surprisingly, Lester B. Pearson is at the forefront of this discussion. Carroll emphasizes the respect he received, and as a consequence, the reader is given a clear depiction of Canada’s shift from a subsidiary of British Imperial foreign policy to uniquely Canadian identity in the international arena – even if they still had to contend with those historical ties at times.  Carroll’s narrative also gives credence to the role of Canada as a power broker between Britain and the United States, especially when the two world powers were at odds.

From here, some might question the structure of the book.  In some ways it reads like two different studies: One focused on the political quagmire at UN headquarters, particularly the difficulties of keeping the force funded, and the other detailing the daily lives of the soldiers on patrol in desert. In fairness, the organization may well have been strategic – indeed Carroll notes numerous times that there was a significant disconnect between the hallways of the UN headquarters in New York and the realities on the ground in the Middle East.

Chapters four and five, outlining the financial mess of the peacekeeping operation and the political forces driving the inability to reach an agreement, both provide insight into the highly complicated world of international diplomacy.  While some may find the chapters frustrating, Carroll does an admirable job of making sure the courting, subtle innuendo and ambiguous nuance common to international diplomacy is clearly portrayed to the reader.  The tangled webs of diplomacy are astutely reflective of the political frustrations Canadian diplomats to the UN faced as they poked and prodded the great powers for a financial resolution that was never attained because at its core “the economics of peacekeeping was never a financial issue: it was purely political.” (97) 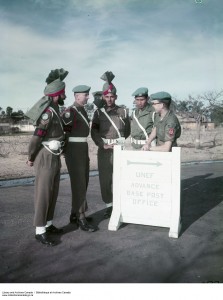 Group of UNEF Wait for Mail at Abu Sueir, Egypt Base Post Office.

Carroll’s description of the UNEF on the ground is filled with anecdotal gems that add life to the very real difficulties facing the force at all levels.  Accounts of the masterful leadership by Canadian officials on the ground to the trials and tribulations of working with such a diverse group of soldiers from different countries with varying levels of professionalism allows for a unique understanding on the ground. It’s a well honed story of a military operation always in need of more supplies, more troops, facing impossible situations and not only making do, but also proving to be impressively innovative in finding solutions.

Historians of war have long known that what soldiers have more than anything is time and this is even more true when the job is peacekeeping.  For this reason, Carroll is to be commended for the considerable space he gives to the leisure pursuits of the soldiers.  From the establishment of the Bedoin Golf  and Country club, dubbed the “largest sand trap in gofldom” to the addition of desert curling on 30 foot wooden planks, the soldiers proved as resourceful in their creation of leisure activities as they did in making the multilingual, multi-ethnic peacekeeping contingent work for more than 10 years in the desert.

The mission did come to an end, and the Six Days War, which started a mere two weeks after the UNEF force was asked to leave, led many to conclude that the decade-long mission had been a failure.  Carroll is clear though: Pearson’s peacekeeper’s were intended to stop the fighting and provide time and a peaceful environment for a second phase – the diplomatic talks aimed at solving the underlying issues of the conflict. The politics of the late 1950s and 1960s, however, did not allow for the second phase to ever start.  In spite of this, Carroll’s matter-of-fact assessment of the events convincingly demonstrates that because of the long-lasting impact of the mission, the UNEF was far from a failure.  It provided valuable insight into the need to ensure the disagreements that originally led to hostilities were an integral component of any peacekeeping mission.  The deployment of UNEF2 ultimately succeeded in fostering the Camp David Accords of 1979. The fact that it allowed for many of the differences to be overcome is a testament to the lasting legacy of UNEF – even if it came almost a quarter century after the start of its original mandate.

Carroll’s use of Photographs is a frustrating weakness of this book. Like too many manuscripts, the images feel like after-the-fact additions.  The photos focus only on the soldiers on the ground when more than half of the book is dedicated to the delicacies of diplomacy. Surely there exists rich illustrative material that has been omitted.  More troubling, none of the photos are afforded the same critique and analysis other sources are given throughout the text.  Photos are taken for a reason and it is not clear what purpose these photos served.  The final critique of the photos falls with the publisher.  If they are printed on the same paper as the text why not allow them to fall where they associate with the text?  Perhaps I have given this seemingly erroneous critique too much space and it may well be a cumulative condemnation of a great number of books who passively employ photos but it is a real disservice to a solid historical account not to have been as selective, purposeful and critical of the illustrative material.

From a Canadian perspective, Carroll talks about Pearson’s Nobel Peace Prize, the role of the UNEF and its troubled final phase. He demonstrates that the birthplace of the ‘peacekeeping myth’, one of the central features of post-war Canadian identity, finds its roots in the Suez Crisis.  This willful amnesia, according to Carroll, has obscured the mission’s troubled conclusion.  Yet this study is not an assessment of that myth.  One reviewer has pointed out that Carroll’s failure to deal with the peacekeeping myth is a major oversight.  In many ways this is critiquing the author for a book which he had no intention of writing.

When another scholar decides to analyze the peacekeeping myth they will have an excellent historical account of its origin to consult. Carroll’s study does a great service to advancing our understanding of Canada and the UNEF.  This is much more than a diplomatic history: it is an account of Canada’s emergence as a brokering power on the international stage. With Pearson at the helm, Canada sought to lead a war-weary world down a new path of conflict resolution through the United Nations.  For all of its faults, that the United Nations still relies largely on the Pearsonian peacekeeping model is a testament to the lasting impact of the Canadian contribution to the UN.  Carroll’s detailed account of the saga in the Middle East clearly shows how this came to be.