[ACUNS] Review of Geoffrey Hale’s So Near Yet So Far: The Public and Hidden Worlds of Canada-US Relations by David Borys

Geoffrey Hale, So Near Yet So Far: The Public and Hidden Worlds of Canada-US Relations (Vancouver: University of British Columbia Press, 2012), 440pp.

Geoffrey Hale takes on the monumental task of analyzing Canadian-American relations in his book So Near, So Far: The Public and Hidden Worlds of Canada-US Relations. In this 2012 publication, Hale offers us a window into the vastly complex and multi-layered aspect of the relationship between Canada and the United States (US) through the examination of four distinct themes: political-strategic, trade-commercial, cultural-psychological, and institutional-procedural. He then applies this thematic framework in a well-balanced examination of three broad policy clusters: policies related to homeland security and how they affect economic integration and interdependence, management of trade disputes, and the evolution and partial coordination of energy policies. As Hale readily admits, however, many of these clusters overlap involving both national and regional government bodies on both sides of the border in the ‘intermesticity’ of Canada-US relations. Needless to say, the character of the relationship is what makes it truly unique and unlike any other bilateral partnership. 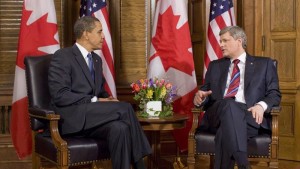 Barack Obama, President of the United States of America, with Stephen Harper, Prime Minister of Canada, 2009.

The first section of Hale’s text examines this relationship by explaining how it fits into the aforementioned multi-thematic framework. In Chapter Two: Guns, Globes and Gardening, Hale explores Canadian efforts to influence American policies towards Canada in a political-strategic context. Chapter Three compares and contrasts trade and commercial policies specifically focusing on sector-specific American policy towards Canada and how it affects the international economic relationship of both countries. In Chapter Four, Hale reasserts his contention that American policy towards Canada is more often an “afterthought of the American political classes except for the relatively small number whose political or economic interests are directly affected…” (p 74) and examines its affect on the psychological-cultural dimension of the Canada-US relationship. Hale argues that while Canadian politicians and special-interest groups work hard to influence policy in the United States, American politicians often only address these concerns as an afterthought of US policy with few exceptions for special cases.

The second section examines the complicated political and procedural processes that characterize Canadian-US relations in what Hale describes as a multi-level game engaging all levels of the government, bureaucratic departments, policy-specific sectors and interest groups. Chapter Five examines the dialogue between national leaders, which Hale refers to as ‘single-point diplomacy’ efforts, and contrasts its effectiveness with the more common decentralized processes of bilateral relations at sectoral and departmental levels. The multi-level game becomes even more complex when Canada’s federal government, represented by our embassy in Washington, engages with American domestic political processes. Hale addresses this American domestic political engagement by the Canadian government and highlights the ‘intermestic’ nature of the relationship between the two countries – “the blurring of traditional distinctions between foreign and domestic policies and politics on numerous issues” (p 127). 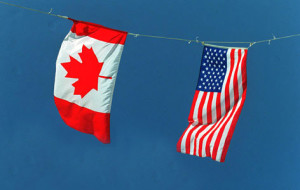 This blurring of traditional distinctions is sharpened in Chapter Seven when Hale examines how the Canadian government engages Congress through direct lobbying, embassy engagement, and legislative tracking. Hale supports Alan Gotlieb’s labeling of this aspect of Canada-US relations as part of the ‘New Diplomacy,’ the transcending of “formal intergovernmental relations” through the extensive economic integration and interaction of both countries citizens and businesses (p 150). The central challenge, Hale argues, is for Canadian diplomats to recognize and understand congressional political processes and to identify the economic and societal issues that affect Canada and are relevant to specific congressional members, while avoiding the stigma of foreign meddling.

Since many American politicians consider cross-border issues as sub-sets of American policies, public diplomacy, as Hale points out, becomes the most appropriate course of action in swaying American opinion towards policy decisions that favor Canada. This effort, cultivating relationships with non-state actors and specific policy communities, is discussed in length in Chapter Eight. Hale argues that these intergovernmental, economic and societal networks provide “much of the hidden wiring of the broader Canada-US relationship” (p 180). This hidden wiring is explored further in Chapter Nine where Hale examines Canada’s diplomatic capacity outside of the Washington beltway specifically focusing on the effects of federalism and regionalism on cross-border issues. Hale points out that the “politics of fragmentation: the interaction of integrating and fragmenting forces at multiple levels” (p 198) has grown significantly in recent years and plays a major role in Canada-US relations providing a practical balance of diversity and cooperation.

The final section of Hale’s book examines specific case studies on policy issues affecting countries as well as the methods and processes utilized to bring about resolutions. Chapters 10 and 11 examine the smart border accords in the wake of 9/11 and efforts by both sides to negotiate a more integrated security approach while limiting its effect on cross-border trade. Hale notes that “few policy fields illustrate the central features of Canada-US relations” (p 223) like the politics of border security. According to this argument, since 2001 Canada’s approach to bilateral relations on border management has been hedged on three major objectives: pursuing reciprocity and mutual recognition of policies, avoiding or limiting the politicization of border management issues, and attempting to minimize linkages between US border management practices with Canada and Mexico. It is here that Hale’s text really comes together. For most of the book we are subjected to a brave unraveling of an extremely complex issue and at times Hale appears to have tackled too large a subject for a single monograph. When he finally begins applying his study to practical examples, however, we are witness to his breadth of knowledge and mastery of the subject. 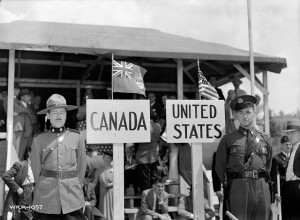 In Chapter 12 Hale continues his case studies by highlighting several significant trade disputes over the past decade and shows how the dispute resolution processes under NAFTA have been relatively successful in depoliticizing most issues so that cross-border economic and political relationships remain unaffected. Hale uses the disputes over the ‘mad-cow’ scare of 2003, the softwood lumber dispute between 2001-2006, and the 2009 Buy American legislation to highlight how politicians on both sides of the border have successfully depoliticized most issues while keeping the disputes sector-specific.

Hale concludes his case study section with an examination of the evolving integration of North American energy policies since the 1990s arguing, “Energy and related environmental policies can be viewed as a proxy for the broader Canada-US relationship” (p 302). Hale suggests that it is unlikely a single energy policy will emerge in North America and thus the federal and provincial governments need to develop a three-level strategy, aimed at the executive, congress, and the states in order to effectively engage Americans in energy and environmental policies that are positive for both countries.

In examining this topic, one cannot ignore Mexico’s role in North American relations, and Hale bravely negotiates the complicated trilateral relationship of the three North American countries when it is relevant to Canadian policy. Hale explains that while some desire what he labels a “grand bargain” – a large bilateral or trilateral agreement on major policy issues – he is quick to show that the vast decentralization of significant policy issues as well as the mutual insecurities of the American-Mexican relationship remain obstacles to any sort of large-scale agreement. Instead, Hale supports the consensus-based “soft law” approach, dealing with individual issues as they arise while depoliticizing any major policy disputes.

So Near, So Far is a must read for any student of American-Canadian relations. Hale’s utilization of academic and professional sources provides for an expansive and relevant discussion. At times his book is bogged down in the complicated nature of the topic as he tries to clarify the multi-level and decentralized nature of many areas of the relationship. He is successful, however, in thematically tying together his discussion and the strength of the work is apparent in his application of theories to serious case studies.

Hale performs admirably in his attempt to showcase the complex bilateral relationship between Canada and the US. His depth of knowledge is incredible and his grasp of political theory provides a solid foundation for his study. Particularly striking, however, is Hale’s use of his contacts within American and Canadian diplomatic circles as sources throughout text, conducting 170 interviews for his work. These interviews give his work a level of relevance that is hard to achieve in the fast-paced world of information sharing and elevates it to one of the more prolific books on current Canadian-American relations.