Part of Life Itself 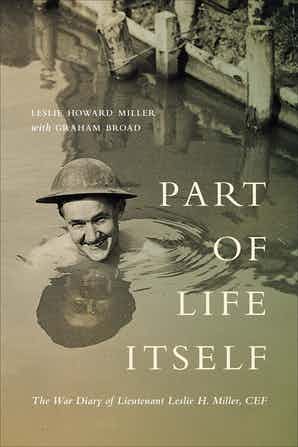 Series: The Canadian Experience of War

This extensively annotated wartime diary illuminates the military service of Leslie Howard Miller (1889–1979), a Canadian soldier who served in the First World War. Miller joined the Canadian Expeditionary Force (CEF) in 1914. From the outset, he served in the signals – the branch of the service responsible for communications. In his off-duty hours, he kept this extraordinarily eloquent diary of his training, deployment overseas, service on the Western Front, and periods of leave in the United Kingdom. A teacher and school principal who attended the University of Toronto, Miller writes with a scholar’s eye – keenly observant of his surroundings and always pausing to reflect on what is new and novel, especially in the natural world he so cherished. In 1919, Miller returned to Canada with acorns he gathered on the Western Front and planted them on his farm in Milliken, Ontario. Saplings from the original oaks have been repatriated to Vimy Ridge and planted at sites around Canada as part of the Vimy Oaks project.

Graham Broad, working from a transcription of the diary produced by Miller’s family, includes a thorough introduction and afterword, as well as over 500 notes that situate and explain Miller’s many references to the people, places, and events he encountered.

Unpublished for over a century, written in bracing and engaging prose, illustrated with Miller’s own drawings and unseen photographs, Part of Life Itself illuminates a bygone world and stands as one of Canada’s most important wartime diaries.