My Experience Photographing the War of 1812 Reenactments

I have photographed Canadian battlefields in France and Belgium, but last weekend I went to a few in my own backyard. With fellow LCMSDS associate Geoff Keelan, we traveled to battlefield sites in Moraviantown, Windsor area, and Monroe Michigan in preparation of our unnamed War of 1812 battlefield guide due out this fall. The culmination of the trip brought us to Fort Meigs in Perrysburg Ohio for a battle reenactment.

Beginning on April 27 1812, British forces supported by First Nations allies attempted to capture the Fort but were unsuccessful in their efforts to breach the outer walls. The following week, Fort Meigs was reinforced by a contingent of Kentucky militia who quickly staged an assault on British gun positions. Their action also resulted in failure, with over 500 taken prisoner, many whom became victims of native retribution. Though the British counted the siege as a tactical victory, Fort Meigs had been reinforced, resupplied, and was still in American hands.

One-hundred-and-ninety-nine years later the battle was played out again, though admittedly with smaller numbers of belligerents on both sides. With canon blasts answering each other in the background, American forces marched steadily forward as Canadian militia and native scouts harassed them from a small grove of trees. Several minutes of firing ensued with the Americans advancing ever closer. Just when it seemed that the scouts would have to retreat, the British appeared to reinforce them. Though border-crossing issues the previous night thinned their numbers, (a modern not historical influence on the battle), the British were able to turn the tide and push the Americans back into Fort Meigs.

There are two dangers I have encountered while photographing reenactments thus far. The first is personal. Though the weapons used are “recreations” they are still firearms and very dangerous. Loaded muskets and canons will fire projectiles since they do not have chokes like other firearm replications. If one were forgotten in the barrel it could easily be fired with the right amount of powder. For this reason, ramrods are not used on the field. The second danger concerns the audience. The presence of a photographer can easily disrupt their experience by ruining the illusion. This creates a situation where I have to preform a careful balance in making sure I get the photos I need but also being aware of how my movements will affect the audience. 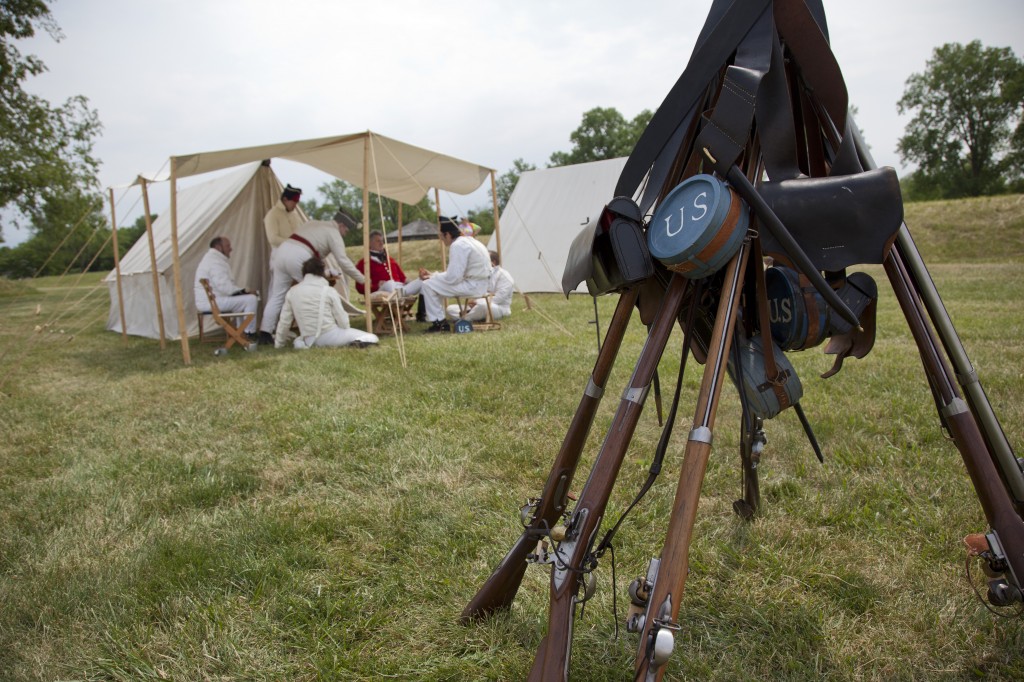 US regulars rest before the Siege begins. 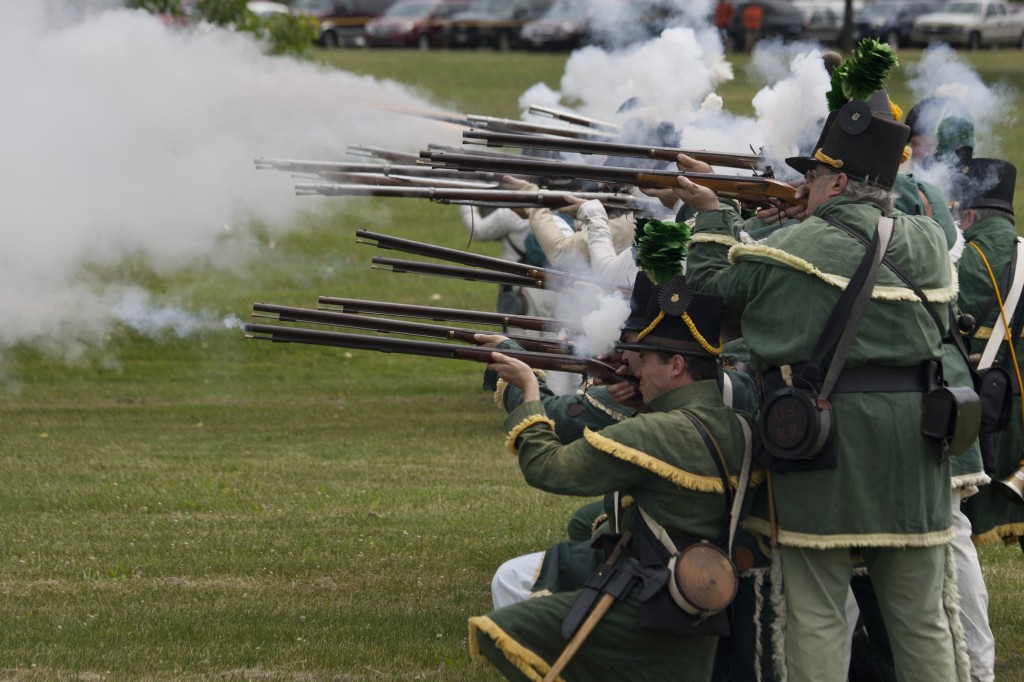 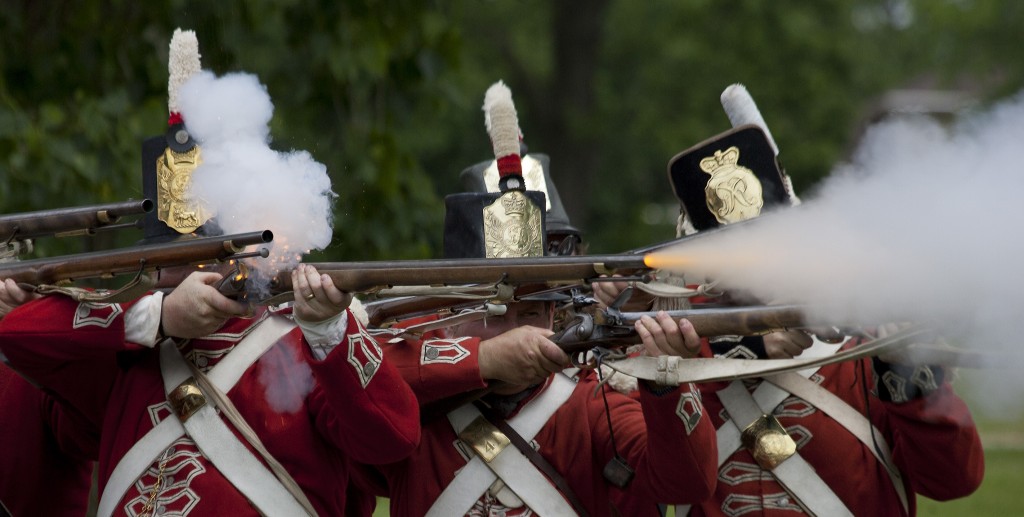 American forces retreat in the face of mounting casualties. 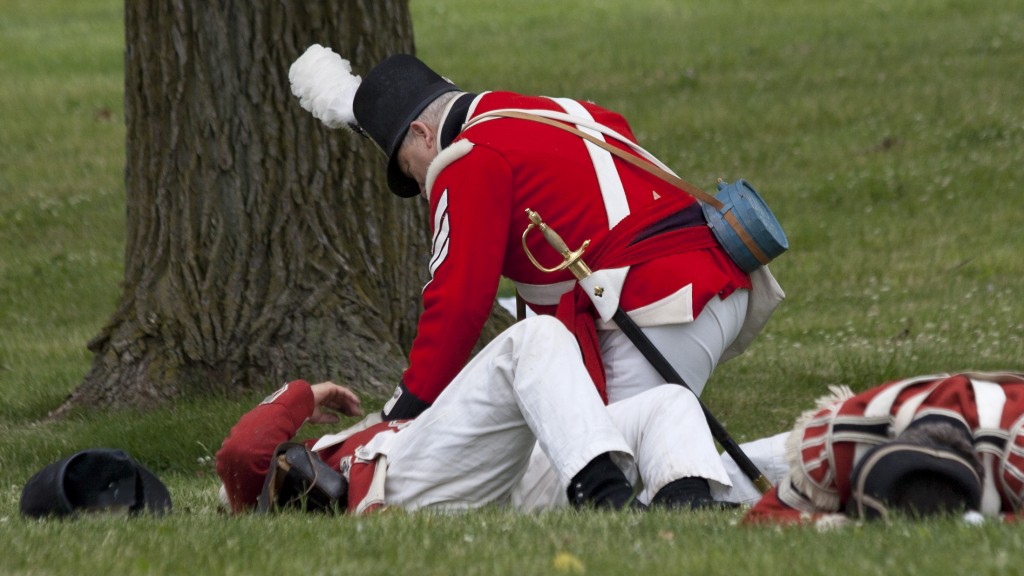 Casualties on both sides.

Reenactment season is in full swing now and more prominent than ever with the bicentennial of the War of 1812. There are multiple events each month throughout the Great Lakes region and on both side of the border. Though not necessarily accurate in every aspect of how battles unfolded (and how could they be?), reenactments offer an interesting entry point to the history surrounding them. They give community members a chance to access local and national histories they otherwise might not seek out.