Commemorating the Somme 100 Years Later: Reflections on Memory and Remembrance

Commemorating the Somme 100 Years Later: Reflections on Memory and Remembrance

Last Friday, July 1st, marked the 100th anniversary of the first day of the Somme, in which between July and November 1916, the French and British (including participating dominions) suffered approximately 600,000 casualties (over 1 million including German casualties). On the first day alone, the British suffered approximately 60,000 casualties including over 19,000 killed. Statistics do  not do justice to the tremendous grief that must have been caused because of that single day of battle, not to mention the subsequent 140 days of fighting. For every soldier killed there was an immediate and extended family who bore the pain of loss. Many of the soldiers came from Kitchener’s Army including the Pal’s battalions that were composed of volunteer citizen soldiers from the same localities. Extended communities were also devastated.

Although it is impossible to access the subjective pain born out of the carnage of the First World War, those bereaving families, friends ,and communities left their mark. Their grief is etched out in monuments across the French landscape and in communities across participating nations. While it is common for contemporary viewers to see in the monuments of the Great War the politics of the day, as historian Jay Winter reminds us in Sites of Memory, Sites of Mourning, the Great War monuments were informed by personal loss in the face of unprecedented mass death in war. “Their ritual significance,” he states, “has often been obscured by their political symbolism which, now that the moment of mourning has long passed, is all that we can see”. More recently, in his sweeping cultural history of the dead, Thomas Laqueur documents how the great monuments to the missing, such as Menin Gate, Vimy Ridge and the Thiepval Memorial (among many others) were a response to a change in sensibilities in the West. It was no longer acceptable in the 20th-century (for many reasons too complex and varied to document in this short blog) to leave the war dead graveless and nameless. By 1930, nearly 600,00 British and Dominion soldiers had named graves. 200,000 soldiers that could not be identified were nonetheless given tombstones with the epitaph “Known Unto God”. From 1914 onwards, families wrote to comrades, chaplins, officers and (after the war especially) the Imperial War Graves Commission (IWGC) desperate to find the location of their loved one’s grave. The solution was to provide massive lists of the dead who had no known grave and place them on a monument near the location where they were most likely killed. This included not just the 200,000 unnamed graves but also those 336,000 whose bodies were never found. Laquer reminds us that Thiepval, Vimy and Menin Gate are not just First World War monuments they are grave sites to those who have no known grave. It is this meaning that Winter fears we risk losing when we project our own political and modern perception of the war onto these historic artifacts of loss and mourning. 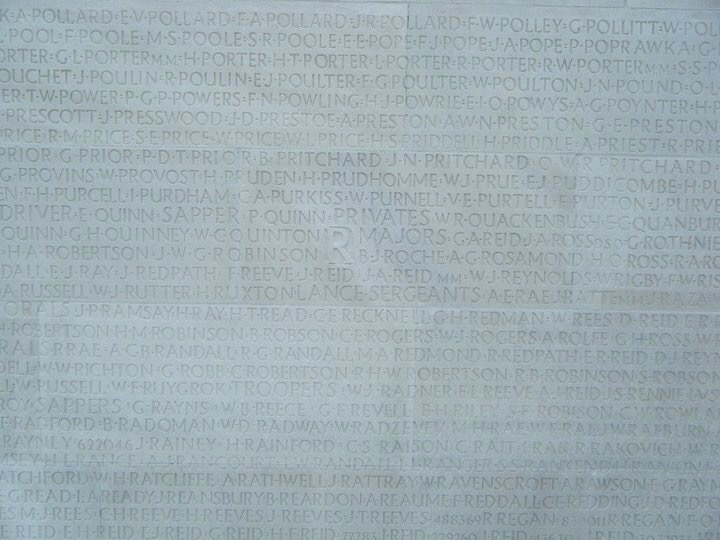 Some of the missing on the Vimy Memorial.

But there no longer exists these immediate personal connections. There is no one alive in Britain or elsewhere who experienced the Somme either directly or indirectly. The Somme has faded from memory to history. And yet despite this loss of memory last Friday’s commemorations were significant. If we no longer have that personal connection what binds us to the the dead of the Great War and what do they mean to us? How do we connect to a past that is no longer here?

Across the United Kingdom last Friday, 1400 men volunteered for a living memorial to the Somme. Dressed in historically accurate uniforms, the men appeared randomly in public. Each represented a real individual who was killed on the first day of the Somme. They did not speak (although they did occasionally sing the trench song “We are here, because we are here”) but handed out cards to curious onlookers with their name, regiment, and age at the time of death (if known). According to the project’s website, it was “partly inspired by tales of sightings during and after the First World War by people who believed they had seen a dead loved one.” On July 1st many in the UK were made to witness the return of the dead; the nations history confronted the present.

The public commemoration reached many more through social media. People took to Twitter to share photos of the soldiers with the hashtag #wearehere and share their reactions and thoughts. 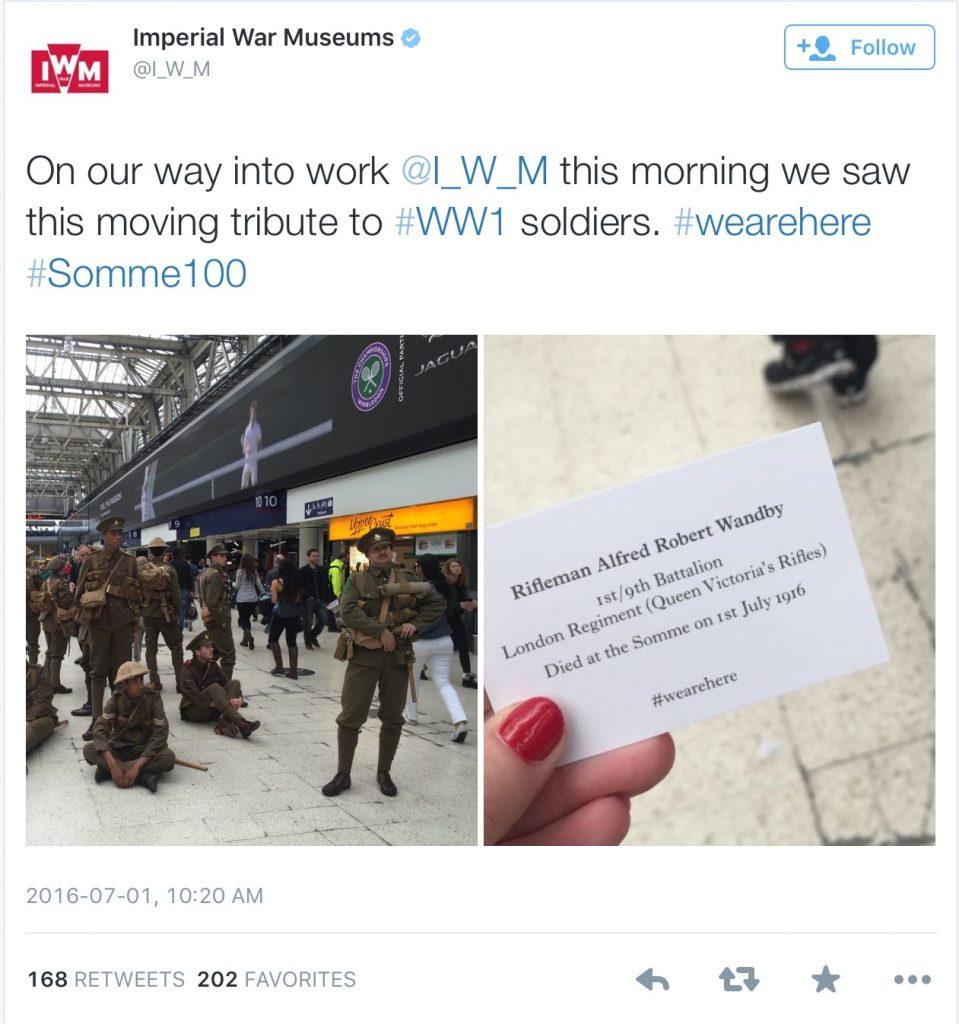 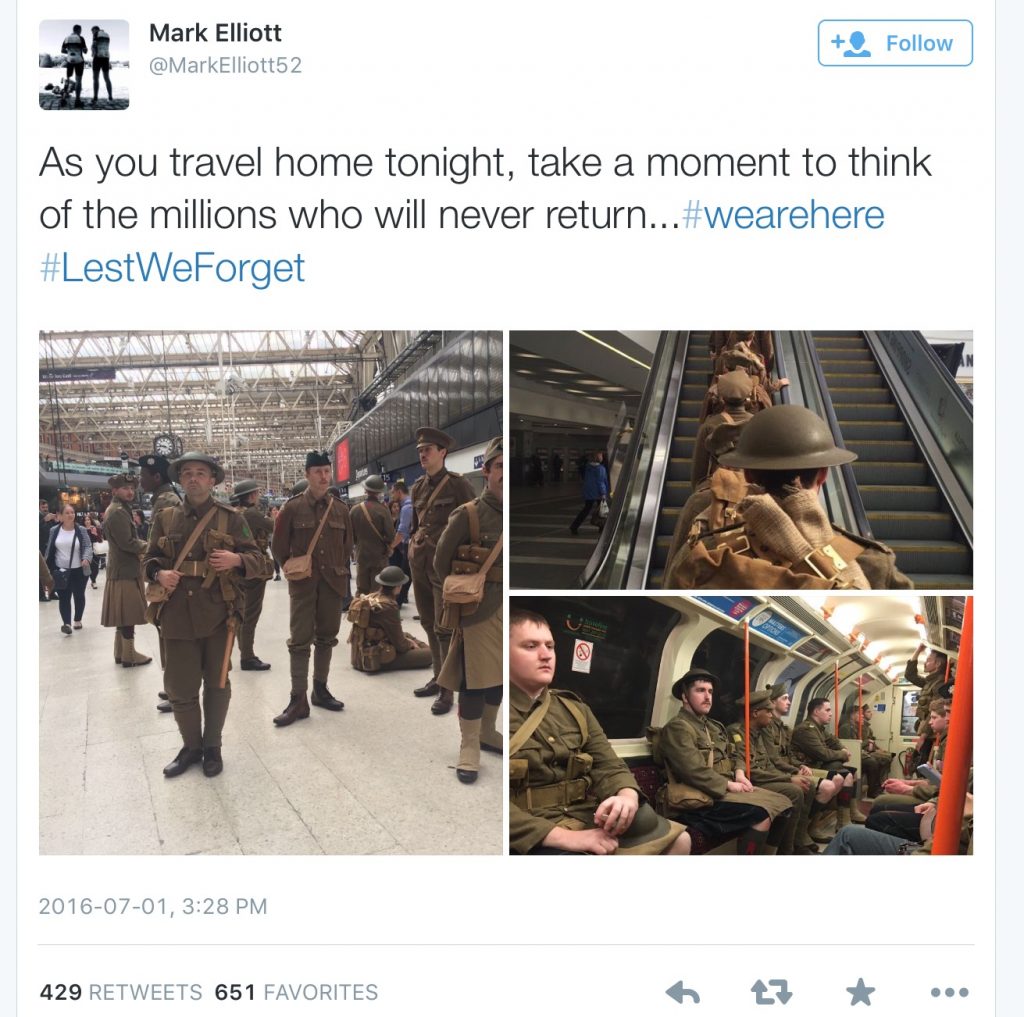 Others thought the memorial put the politics of today in perspective. 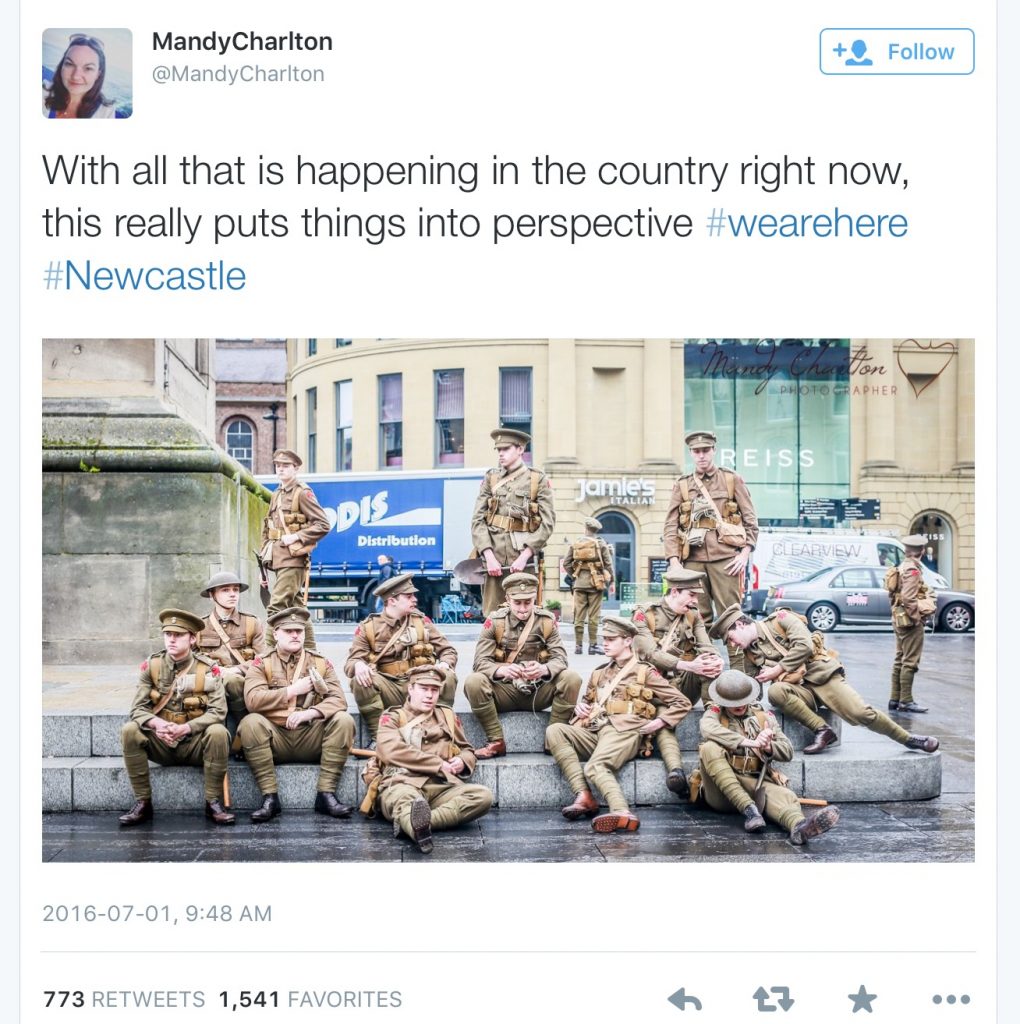 And some took the moment to share their own personal connection to the first day of the Somme. 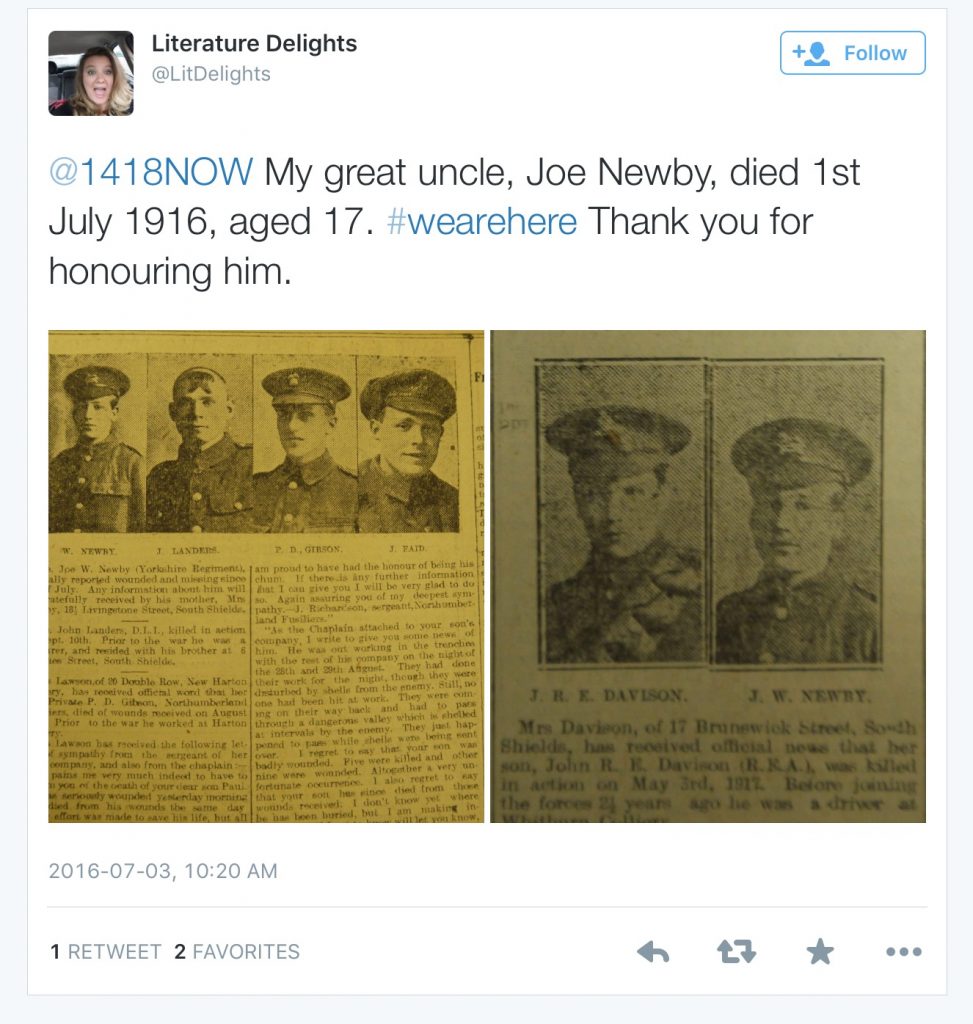 Beginning on the night of June 30th at the Thiepval memorial, a candle light vigil ended with a two-minutes of silence at 7:28 a.m. to mark the moment the men went over the top. This was followed by footage of the film The Battle of the Somme, released in 1916 and seen by an estimated 20 million people in Britain. The ceremony included First World War music and poetry and statements from French and British politicians and the British Royal Family. George Butterworth of the Durham Light Infantry, whose name appears on the Thiepval memorial, was remembered as the BBC Symphony Orchestra played his “The Banks of Green Willow,” composed during the war and before his death. Prince Charles statement read: “It is truly terrifying to imagine the destruction wrought across this landscape one hundred years ago today… For many people in Britain, the Battle holds a special place in the public consciousness”. But imagine they did. Men and women dressed in black and white stood next to individual grave stones to remind us that each was once a living person. This and the invocation of First World War art and film and the two-minutes of silence, all express a deep desire to connect with the past at a given site. The BBC currently has a feature called Your Somme that creates a Great War scenario for you based on your age and gender. “We can draw up the most likely scenario which would have faced YOU in World War One”, it proclaims.

In Canada, the Somme is often remembered in connection with the tragedy that befell the Newfoundland Regiment. On the morning of July 1st, 800 Newfoundlanders went over the top, only 68 answered roll call the next morning. Today a beautiful monument of a caribou stands on Beaumont-Hamel where the Newfoundlanders made their attack. The incident has become a significant moment in Newfoundland’s history. As one historian has explained, the tremendous sacrifice required some sort of meaning, it therefore became a symbol of national identity: “with their glorious sacrifice, Newfoundland had secured a place for itself within the rank of the international community and within the British Empire especially”. On Friday’s ceremonies in St. John’s, this sentiment was echoed by MP Seamus O’Regan: “I have a very hard time putting words around it sometimes, especially in the moment…Now that it’s here, the hundredth anniversary — it’s confusing….It’s a time to celebrate who we are…but it came at such a tremendous cost.” 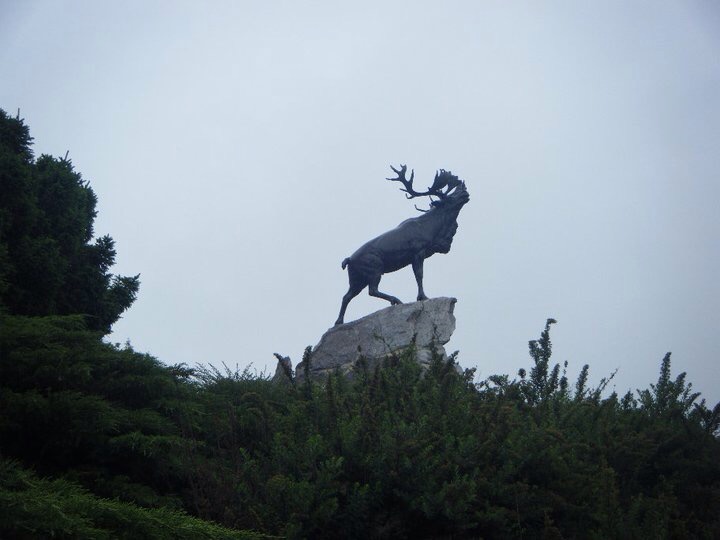 O’Regan’s comments get at the heart of remembrance: a confusing but necessary struggle. We struggle to comprehend the numbers, to put a face and history behind the gravestones and endless list of names of the missing. We struggle to understand the mindset of those who went to war for reasons that may seem strange and alien, even unreasonable to us. We try to imagine the destruction that has left scars on the French landscape. We still attempt to give the losses sacrificial meaning. Moreover there is still a great need to remember the dead. Whether it is to put contemporary events into perspective, to build communities along national myths, to remind ourselves of the tragedies and suffering of war, or to confront our own impending mortality. Regardless of the reasons, the centenary of the Somme demonstrates the continuing power and relevance of remembrance; the “mystic chords of memory” bind the present with the past and keep the dead alive. Soldiers were able to haunt the streets of the United Kingdom last week because we have remembered the men who died and because those who suffered the pain of losing them etched in stone the names of their dead.