This post is the first in a mini-series of articles that explore the personal military experiences of the author in the Cold War period.

I arrived in London Ontario, home of the 1st Battalion of the Royal Canadian Regiment (1 RCR), in April 1973. Having just finished basic training in Cornwallis, Nova Scotia in March 1973, I was ready for the next adventure. Basic training had started with 132 people from all elements of the military, and by the end of a three months training period 83 remained. Of that number, twenty-nine were infantry, including myself. This entire bunch of “unruly teenagers” was posted to 1 RCR in London. 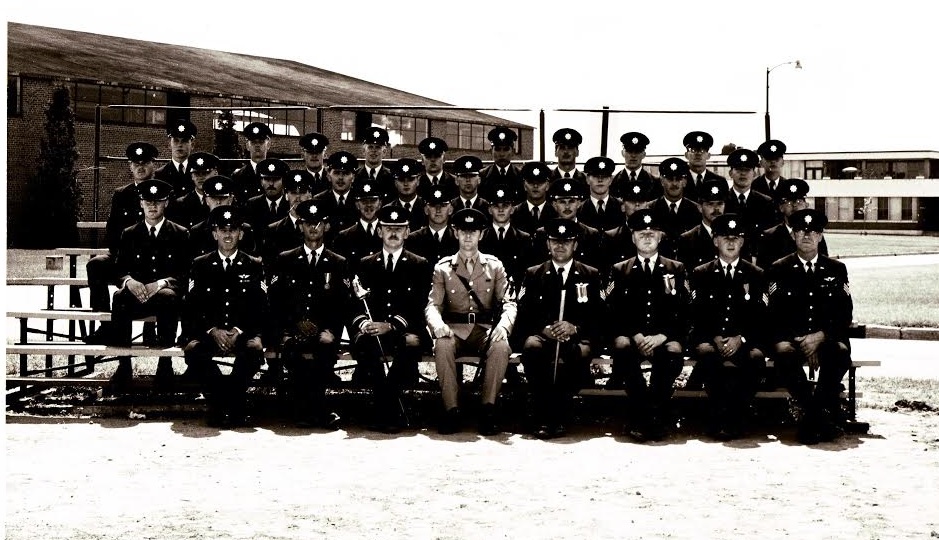 Our course graduation with our British exchange officer before Cyprus.
Upon our arrival in London, we were to embark on the second part of our infantry training. At the time, Canada had not been involved in a war for many years. We had a few senior NCOs (Non-Commissioned Officers) who had served in the Second World War, but most of them were getting long in the tooth. Our course was assigned to be trained by an exchange officer from the British army, who was a young Captain that had just returned from a tour in Northern Ireland. In my estimation he was a very effective trainer. I particularly recall one class on the 9mm pistol, which he waved and aimed at us. We all thought we knew what he was going to do and, finally, he did it – he pulled the trigger. I vividly recall everyone flinching in expectation of a blank going off, but nothing happened. Without missing a beat, the Captain went back to instructing us on the use of the pistol. We looked at him like a bunch of sheep, confident that we were going to experience the same thing as before.  He pulled the trigger and BANG.  The room was small and the noise of the blank firing echoed with an ear-splitting sound.  Twenty-eight wide-eyed soldiers were scrambling to find cover where none existed.  It must have made his day.  He had palmed the blank cartridge and loaded the pistol in front of us with no one noticing.  It left an impression on us all and instilled in us a healthy dose of distrust.  To this day, his training reminds me to never take anything at face value and to trust nothing, even when I believe I saw it with my own two eyes. 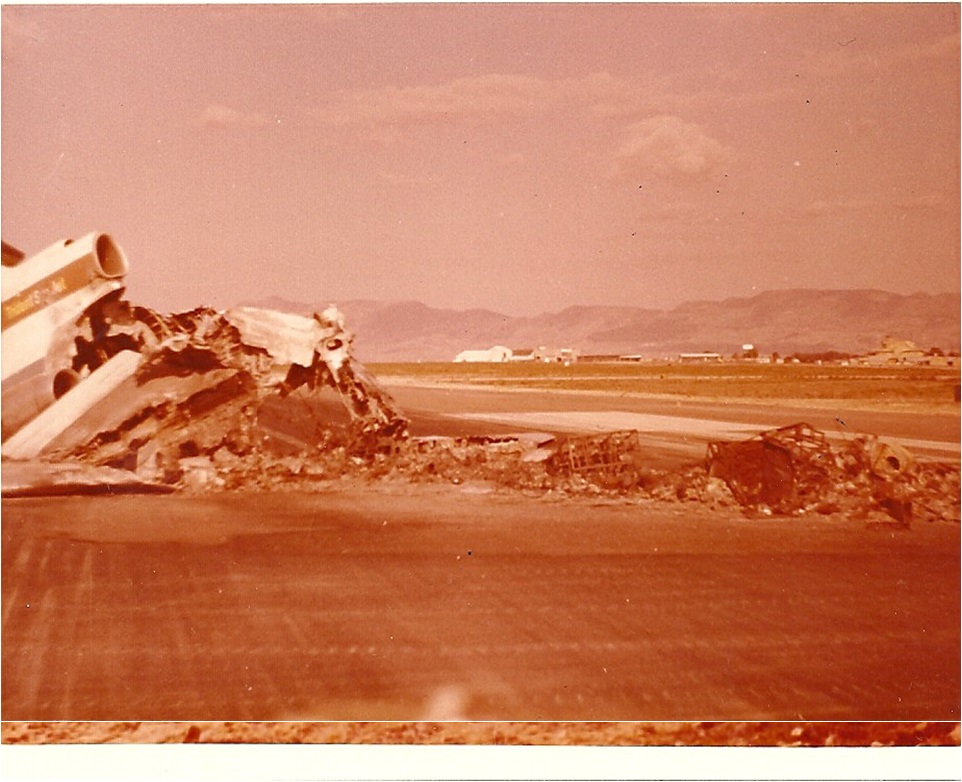 Training continued and we were to rotate on a peacekeeping tour to Cyprus in December 1974. Between 1972 and 1974 hundreds of young troops were rotated to London. The battalion was going to be deployed to Cyprus as a peacetime contingent, therefore, only some of us were to go. A number of associates and I were not picked because we were relatively new. I was told there would be plenty of other opportunities to go to Cyprus in the next few years, which was not a comforting thought. I was eager to go to Cyprus and wanted to go immediately, so I look looked for a reason to get myself on this tour. A call went out from the Sergeants’ mess looking for a bartender with experience for Cyprus and even though I was young, I had managed a bar at some point in my civilian life. The main task called for a bartender to serve beer and throw out unruly people who had consumed too much. Seeing a glimmer of light on the horizon I volunteered for the position, which is something you should never do in the army. I was immediately sent off to train as a bartender for the Cyprus tour. Had I known that a war was about to break out on Cyprus I would have tried to buy more time, because I was in search of peacekeeping rather than bar tending. There were many more checkpoints and OPs (Observation Points) to man following the invasion, so in the end almost everyone from Base London went to Cyprus, even soldiers with only one year of experience. For myself, I was stuck as a bartender, longing to be out in the field. The soldiers who had been to Cyprus two or three times before told me to shut up and enjoy the bird job – I thought they were crazy!
The Island of Cyprus had been relatively quiet for a few years but things were heating up and trouble had been in the making for a long time. The first Canadian led peacekeeping mission to Cyprus was in 1963. The United Nations (UN) and the Canadian peacekeeping mission had only a ninety day mandate. In the end, UN peacekeeping forces were on the island for almost thirty years. In July, 1974 the Greeks launched a coup d’etat against the Government of Cyprus and its leader, Archbishop Makarios, who was also the President. Greece installed a puppet government led by Nikos Sampson, a nationalist who wanted Cyprus to become part of Greece. The minority Turkish population, fearing slaughter at the hands of the Greek majority, asked Turkey for assistance. On 15 July 1974, Turkey invaded Cyprus and took over approximately a third of the island. The Turkish forces were stopped at the Green line by the Canadian Airborne Regiment which had been reinforced with British tanks.
In December, 1974, 4.5 months after the invasion, I landed in Cyprus. I had left London dressed for -20C and landed in Cyprus at 27C above. The first thing I saw after walking off the plane was a wrecked and burnt out passenger jet littering the runway. This was an awesome sight for a bunch of twenty-two-year-old soldiers who were extremely inexperienced and untraveled.
The airport, a new multimillion dollar complex, sat silent and dark with no electricity. There was virtually no movement anywhere, and the atmosphere was quiet and eerie. I recall there being many ticket counters and shops waiting for tourists who would never arrive. The airport empty today, save the local rat population. We grabbed our rifles and silently exited the airport, and found a convoy of white UN buses ready to take us to our respective bases. This was the first day of our six-month tour. 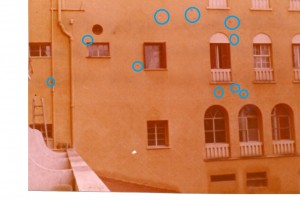 Ledra Palace perforated with bullet holes, view from my room. Note wide balcony ledge where we would sit with our feet hanging over the edge and drink beer. – Photo credit Frank Reid

The Canadians took over the Ledra Palace Hotel in Nicosia soon after the fighting began since it was the highest building around and was coveted by both sides. This was done with the blessing of the owners who thought the war would be over in a few months. To them, Canadians offered much needed protection under the UN flag. The hotel was subsequently used by the military as a base for many years and, in 2004, was designated a Green Line crossing point between the Turkish and Greek population on the island.
I was posted to the Ledra Palace Hotel upon my arrival in Cyprus. The invasion was only a few months old and the Ledra was still mighty, grand and beautiful. Prior to the invasion, it had been one of the most exclusive and expensive hotels on the island. The hotel was a unique gem. It has marble floors, outdoor swimming pools heated by the Cypriot sun, well stocked bars, and ballrooms large enough to fit 500 people surrounded by mirrors fifteen feet high and ten feet wide. In this setting, wealthy guests were known to dance at night while a twenty piece orchestra played and dozens of waiters served champagne. I was making $280.00 a month at that time, and would have never have dreamt of sleeping in one of the hotel’s bedrooms. Thinking back makes me realize that I would have been hard pressed to even have purchased one glass of champagne. But there I was, in luxury nonetheless. 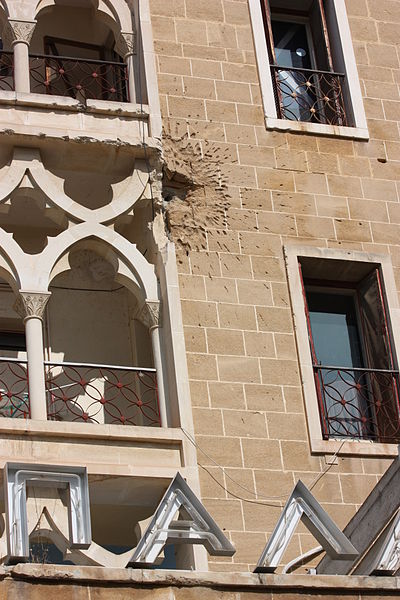 There were only two of us to a room. Each room had a complete bathroom with shower and bidet, not that any of us knew what a bidet was at that time. Being very resourceful, as most Canadian soldiers are, we soon found a use for the bidet. It was perfect to clean the muck out of the treads of our boots. We also had maid service costing a Cypriot pound per week, or about $3 Canadian, which included ONLY cleaning our rooms.
Unfortunately, the hotel had one problem. It was located on the Green Line with Turkish Cypriots on one side and Greek Cypriots on the opposite trying to shoot each other, and us in between. At night, I often heard bullets hitting the hotel on the upper floors. Acting as adolescents my buddies and I sat with our feet dangling over the edge of the balcony, drinking and watching the tracers go over the top of the hotel. We called this entertainment. On 1 April, a soldier out on his balcony was shot and killed, but this incident did not cure us of our foolishness. Some soldiers were more concerned than we were about keeping their skin without aeration holes and slept with their backs against the inside wall on the upper floor, with their mattress’ in front of them. The thinking was if a bullet entered the room it would hopefully get lodged in the mattress and not the soldier.
The Ledra Palace was centrally located on the island which made it the perfect location for a battalion rest and relaxation site. Soldiers from other parts of the island came to visit us on their rare days off, and my job as bartender was to take care of the bar and its military patrons. The bar was open from 10:00 a.m. and remained open late into the night, which meant that I did not have to get up early. Bored stiff, I often harassed the Mess Sergeant and asked him to get me out from behind the bar. He had been with the Air Force and his usual duty was to serve drinks on planes to Generals and politicians as they winged their way around the world. I will never know exactly how he ended up on an army base in London. My thoughts, which I wisely kept to myself, were that he must have irritated a superior and was sent to the infantry base as punishment. He must have thought it strange that I wanted to go out on patrol and do twelve hour guard duty as an infantryman. Two weeks after I landed in Cyprus, my bartender career came to a screeching halt. A soldier from one of the rifle platoons who broke his arm was immediately transferred to the Ledra Palace to take over my duties and I got my wish to be reassigned to a rifle platoon – life was as it should be! 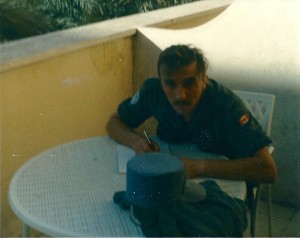 My roommate writing a letter home. Note hat on table. Every night we would starch them and stretch them over a large fruit can to give them shape. Then we would sweat in the hot sun and the starch would run out of the hat and down our foreheads and run in our eyes and burn them. – Photo credit Frank Reid 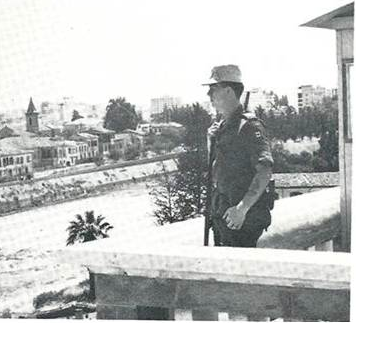 —
Frank Reid is an author, playwright, consultant, and a former soldier in the Canadian Army. This blog series offers accounts of his experiences as a member of Canada’s military during the Cold War.