This post is the third in a mini-series of articles that explore the personal military experiences of the author in the Cold War period. 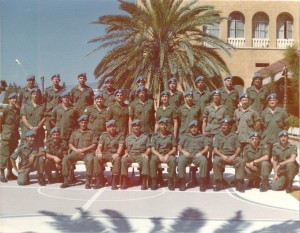 The fine handsome lads of “B” Coy 6 Platoon 1 RCR in front of the Ledra Palace. Photo Credit: 1RCR Photographer

On the last day of my 9 day rotation, while I was pulling guard duty at OP Hermes, I was visited by my lieutenant (Lt).  He was just a little older than me and this was his first tour as well.  We were learning the peacekeeping roll we were to play in world politics together.  Mostly, the peacekeeping mandates were a little more peaceful than the one we had been dropped into, so the learning curve was steep for us all.  Luckily we had some senior NCOs who had been around a long time to help guide us. The Lt explained there had been movement in one of the many burned out buildings on the Green Line and no one was sure who it was: Turks, Greeks or just someone pillaging the empty buildings?  I told the Lt in a sarcastic manner that anyone coming up the stairs to my observation post  who was not suppose to be  there would go down the stairs a lot faster then he came up and probably not in a healthy state. The Lt looked at me in an odd manner and, after a moment’s reflection, came back at me snarling, “I don’t care what you do, Reid, as long as you can account for your 40 live rounds at the end of the shift.”  It was a veiled threat and, on reflection years later, I guess it was not the wisest thing for me to say.  You shouldn’t bait a young Lt.  No doubt he was as exhausted as I was and he had a lot more responsibility on his young untried shoulders than I had.  He then turned and hurried down the stairs to carry on with his inspection of other OPs under his command. 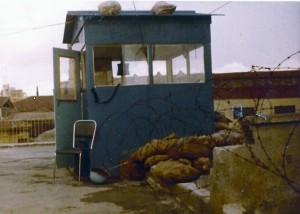 OP Hermes Notice barb wire and sand bags to keep the bad people at bay. Sentry would set on chair with the radio receiver hanging out the window and within easy reach. The blue helmet under chair, just in case. Photo Credit: Frank Reid

Sometimes we had to send soldiers into buildings to see who was there and tell them to leave when one or the other side requested it.  This was a dangerous undertaking for peacekeepers since we were watched closely by both sides and, in many cases, communication between the parties was non-existent.   Anyone in those buildings took the risk of being shot by someone thinking they were about to be attacked by soldiers from the opposite side.  It was a free fire zone as far as Greeks and Turks were concerned which meant you were there at your own risk and you would get no sympathy if someone shot your head off. When we were dropped off for our shifts by the duty driver, we always walked directly up the stairs and to our post which was at the highest point on the building.  Since both sides were always watching, sticking to this routine religiously ensured we were not targeted, or so we hoped!

At 6:00 pm my shift was over and I was looking forward to my day off.  I returned to my room where I was living the good life for free.  A room at this hotel in normal times would have been impossible for me to afford but, here I was.  There were only two soldiers to a room, not the usual open dormitory style sleeping arrangement with dozens of soldiers in an open area on folding cots.  I grabbed something to eat and then headed to the junior ranks mess for a little R & R.

On the way down I picked up a copy of the Nic News (short for Nicosa News) to read later in my room.  It was a paper published by Battalion volunteers.  It included stories, pictures and important dates to keep people informed.  It was also full of funny stories and more than a few bald-faced lies.  An item of high literary content it was not.  When I got to the mess the jukebox was playing “Like a Rhinestone Cowboy” by Glen Campbell and the place was humming.  No problem I thought, I can sleep in late tomorrow.  I grabbed my favourite drink: Cognac and Coke.  At 75 cents a shot I unfortunately indulged too much.  This was not uncommon for the soldiers to do on their one day off.  It is difficult to unwind after 9 days of 12 hours shifts on guard duty.

Another Picture of Hermes. It had just rained and the roof was covered in an inch or two of water. After the rain the sun would beat down and you would feel like you were in a sauna. Photo credit Frank Reid

The junior ranks mess was set up in what had been a beautiful ball room.  In better times it had hosted grand parties for the hotel’s rich clientele.  At one time, in the very near past, uniformed waiters traveled among the guests caring for their every need. But no more, and the only uniforms you could see now were of young tired soldiers.  This was a huge room with marble floors and mirrors, 15-feet tall and 8-feet wide, surrounded the dance floor.  Crystal chandeliers gave it a light airy feeling.  At one time it had been special but now the mirrors looked down on a bunch of kids in blue berets, sweat stained combats and dirty mud crusted boots, cursing, playing cards and drinking to excess. 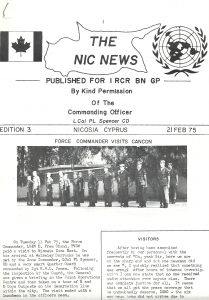 Front page of the NIC NEWS where we got the news about what was happening to our comrades on the rest of the island. We were so spread out you might not have seen people from the other companies the whole 6 months you were there. Photo Credit 1RCR Photographer.

I left the mess about 2:00AM and stumbled up to my room where, fully dressed, I passed out on my bed into a glorious long sleep; or so I thought.

Around 4:30 AM the duty sergeant banged on my door.  We were all ordered downstairs.  Flak jackets and helmets were the order of the day.  Days off meant nothing in the army when an emergency situation reared its ugly head.  When we got to the lobby of the hotel a sergeant was sitting at a desk with a large pile of rifle magazines in front of him.  We were issued with forty live rounds each.  Even my overtired sleep deprived brain told me that this was not a good thing. Typically, the only time we were issued live rounds was when we were on guard duty.  I could hear people whispering and speaking in low tones.  Apparently, one of our foot patrols, which had been out doing their normal route, had been caught at a checkpoint in a cross fire between the Turk and Greek Cypriots.  It was not an uncommon occurrence for us to get shot at, sometimes on purpose and sometimes at random.  Cypriot militia on both sides was mostly untrained and trigger happy. They reminded me of kids with their brand new toy guns on Christmas morning.  At that very moment, the duty officer was down at the checkpoint with a couple of NCOs (Non-Commissioned Officers) and a few privates for added security.  He was speaking with the belligerents, trying to work out a deal to get the patrol out safely. Our sergeant told us in no uncertain terms that if the negotiations failed we would be going out to do the job properly.  Failure was not an option.  I remember being so tired, I had less than 3 hours sleep in the past 24 hours.  As I listened to the sergeant, I leaned against a wall so I would not fall over; hoping that this was a dream and we would not have to go out.  Even though it was early morning, it was hot and we were all sweating profusely.  Between the alcohol still in my system and lack of sleep I was totally drained.  We waited for 4 hours in the Ledra Palace lobby, in full web gear and flak jacket, until the word came down that our guys were safe.  Being a lowly private I was not privy to exactly how it came about.  All I knew was that our ordeal was over.  Even though I was exhausted I was now so high strung I could not sleep.  In a few hours I was back out on another 12 hour shift, dreaming of my next day off and hoping desperately that I would be able to finally get some rest.