‘How to Kill’: The pitiless poetry of Keith Douglas by John Owen Theobald 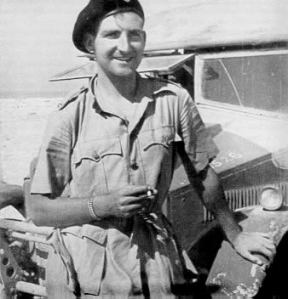 “I don’t give a damn about my duty as a poet,” Keith Douglas wrote in 1943. Instead, he argued, his only object was “to write true things, significant things” that can be read as “significant speech.” This defiant approach led Douglas away from the compassion of Owen and Sassoon and toward a cold, almost disinterested view of his subject matter. There was no room for emotion or sentiment in the 1940-43 North Africa campaign: “I see no reason to be either musical or sonorous about things at present.” Douglas, in the Western Desert, could find no poetry in the pity.[1]

Douglas was acutely literary, and he wrote with the voices of WWI firmly in mind.[2] Edmund Blunden was his tutor at Oxford and the two regularly exchanged overseas letters (Douglas also wrote letters and sent poems to T.S. Eliot, whom he referred to as ‘Uncle Eliot’). During the Africa campaign, he carried in his pockets a small flask of whisky and a volume of Shakespeare’s sonnets.[3] Douglas clung to no illusions about how literature – however great – can reveal the truth of war: “It is tremendously illogical – to read about it cannot convey the impression of having walked through the looking-glass which touches a man entering a battle” (9).

The moment he arrived in Africa he knew his poetry would take a distinct form to match his distinct circumstances. Not only the sandstorms and mirages, the frozen nights and boiling days, but a completely different type of warfare. There was a lack of hatred for the enemy. Rommel and his Afrika Corps were respected and admired by the Allies. Prisoners of war received respectful treatment and were often exchanged.[4] Battles involved relatively small numbers of soldiers. There were no cities to raze or towns to plunder. 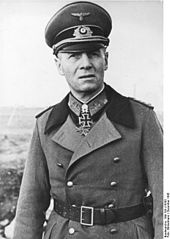 As Lieutenant Schorm of the Afrika Corps noted, the main difference between the war in Africa was that it was “absolutely individual”: “Nobody and nothing can be concealed […] If the struggle were not so brutal, so entirely without rules, one would be inclined to think of the romantic idea of a knight’s tourney.”[5] Douglas seemed to have shared this view, and in one letter home compares the desert war to fox-hunting:

…the Germans undoubtedly fought as long and as well as they could. But when they broke they broke properly, and the pursuit was very like hunting in England, expect that instead of killing the fox when we found him, we gave him a tin of bully beef and searched him for souvenirs.

Although Douglas’s view was not always so romantic, he retained a sense of the battle of individuals, of soldier versus soldier, not ideology versus ideology, or good versus evil. Douglas’s poems sought to capture the truth of this war, not to wave a flag or stage a protest, but to simplify and universalize his experience.

The effect is powerful. In “Vergissemeinicht,” Douglas describes returning over “the nightmare ground” of an earlier tank fight. They find the German soldier “sprawling in the sun.” Douglas remembers the attack – “he hit my tank with one/ like the entry of a demon” – and feels a sense of justice at the scene. Inside the gun-pit he finds a photograph of the dead soldier’s lover, with the words Steffi. Vergissemeinicht (“forget-me-not”). He finds himself unmoved – “We see him almost with content/ abased” – and he continues to relate the scene with the barest emotional commentary:

But she would weep to see to-day
how on his skin the swart flies move;
the dust upon the paper eye
and the burst stomach like a cave.

Such a meeting immediately brings to mind Owen’s “Strange Meeting,” where tenderness turns to fury, and Owen lashes out at generals, politicians, and evokes Christ. Douglas confines himself to the observable facts, the “fly’s-eye-view.”[6] He presents elegy without sentiment.

As G.S. Fraser observes, the rawness of what Douglas presents is couched in formal syntax, literary adjectives, objective precision: we are moved by the material, but deliberately, skillfully – not a leap for the tragic, but a view from an aesthetic distance.[7] Douglas not only strips away the nobility of suffering, he also transfers the pity. The compassion of Owen is here placed on the girlfriend at home. It is she who will weep, just as in “How to Kill,” it is the mother who will cry.

By 1943, the poetry of compassion was dead. Douglas explains why in his response to the criticism of friend and fellow poet J.C. Hall:

Incidentally you say I fail as a poet, when you mean I fail as a lyricist. Only someone who is out of touch, by which I mean first hand first hand touch, with what has happened outside England […] could make that criticism. I am surprised you should still expect me to produce musical verse. A lyric form and a lyric approach will do even less good than a journalese approach to the subjects we have to discuss now […] To write on the themes which have been concerning me lately in lyrical and abstract forms, would be immense bullshitting.[8]

This was a different kind of war, beyond the experience of Owen, Sassoon, and Blunden. His certitude of death lends a visionary quality to his desert war poems, written mostly in 1943. In “Simplify Me When I’m Dead,” Douglas reveals this view:

and leave me simpler than at birth
when hairless I came howling in
as the moon came in the cold sky.

This poem brings to mind Brooke’s famous elegy, “The Soldier.” The brute facts – the truth – of decomposition is much less comforting than Brooke’s “rich…dust” pulsing in “the eternal mind.” Douglas reduces rather than magnifies, what he calls “Time’s wrong way Telescope.”[9]

This poem, grisly without the sensationalism, is an example of the “simple, point-blank, bull’s-eye statement” that Ted Hughes argues helped Douglas confront reality without delusions.[10] “Desert Flowers” sees him as the scribe of such visions, a poet who knows his calling and answers it clear-eyed and without illusion:

I see men as trees suffering
or confound the detail and the horizon.
Lay the coin on my tongue and I will sing
of what others never set eyes on.

Here Douglas stakes out the opposite territory of Owen, writing “Rosenberg I only repeat what you were saying.” He reflected the “cynicism and the careful absence of expectation (it is not quite the same thing as apathy)” with which the soldiers and civilians – Germans and Italians included – now viewed the world. He hinted that one day cynic and lyric may meet and lead him to a more balanced style, but his outlook was bleak:

To be sentimental or emotional now is dangerous to oneself and to others. To trust anyone or to admit any hope of a better world is criminally foolish, as foolish as it is to stop working for it. It sounds silly to say work without hope, but it can be done; it’s only a form of insurance; it doesn’t mean work hopelessly.[11] 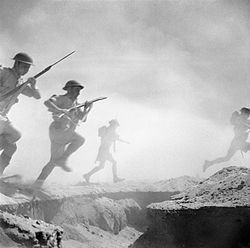 His outlook on his own survival was also bleak. A premonition of his early and unproductive death haunted even his early poems. (“Death is the season and we are the living/ Are hailed by the solitary to join their regiment” – “Dejection”). In “On a Return from Egypt,” the last poem he wrote, he is certain that there is no life, no ambition, no happiness, no time, beyond the confines of war:

And all my endeavours are unlucky explorers
come back, abandoning the expedition;
the specimens, the lilies of ambition
still spring in their climate, still unpicked:
but time, time is all I lacked
to find them, as the great collectors before me.

The next month, then, is a window
and with a crash I’ll split the glass.
Behind it stands one I must kiss,
person of love or death,
a person or a wraith,
I fear what I shall find.

It was perhaps this certainty that allowed Douglas to write with such cold precision. We must keep this in mind when we read the haunting middle stanzas of his most celebrated poem, “How to Kill”:

Now in my dial of glass appears
the soldier who is going to die.
He smiles, and moves about in ways
his mother knows, habits of his.
The wires touch his face: I cry
NOW. Death, like a familiar, hears

and look, has made a man of dust
of a man of flesh. This sorcery
I do. Being damned, I am amused
to see the centre of love diffused
and the waves of love travel into vacancy.
How easy it is to make a ghost. 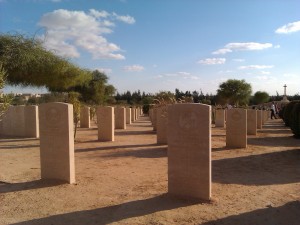 For Douglas, this was the pitiless truth of war.

This is the sixth installment in the year long series War and Literature in the Western World by John Owen Theobald. John, originally from the East Coast of Canada, holds a PhD from the historic University of St. Andrews and now lives in London, England.

[2] His General is described as saying “good morning, good morning as civilly as Siegfried Sassoon’s General,” Alamein to Zem Zem, 10.