“‘I Came To Fight, Not Sling Mud About:’ Work Parties On The Somme As An Indication Of Poor Command Practices” by Bill Stewart

One of the many torments inflicted on the suffering infantry on the Somme was the demand for units in reserve and resting to provide work parties for engineering tasks – typically close to or at the front. The troops would have to march for hours from a rear area at night, pick up tools, hopefully find the guides to lead to the work site where they would engage in hard physical labour for more hours, and then march back, hopefully before dawn. The troops hated the work, their commanders regarded it as an unfair imposition on already exhausted soldiers, and the senior commanders, such as General Sir Douglas Haig commander of the British Expeditionary Force (BEF), thought the infantry were unproductive and their officers slack.

The official view was it was the infantry’s duty to carry out these necessary tasks but that they were doing it grudgingly and their officers were abetting the disinterest and lax attitude. Haig endorsed the notion that the infantry was only doing one-quarter to one-third of what they should because of their attitude of “I came to fight, not sling mud about.” In an example of how out of touch Haig was with the realities of the front, he agreed with the view that the lack of productivity was not due to physical constraints but indifference.[1] While the troops were undoubtedly indifferent to these extra fatigues, it was an insult given the conditions on the Somme to suggest that fatigue, going astray, mud, distance covered, and nighttime work were not major factors in the infantry’s meagre productivity.

An equally important factor, however, was the poor command practices in the BEF, including the Canadian Corps during this part of the war. The work parties were necessary but were poorly managed by the authorities who in turn blamed the infantry for their poor productivity. As C.E.W. Bean, the official historian of the Australian Imperial Force, stated “It is probably true that the importance of the work was not understood by the battalions; it is certain that the staff of Corps and Army had not, then or afterwards, the faintest conception of the circumstances in which it had to be performed; nor were they fully realised at the headquarters of division or even of brigades.”[2] Judging from the responses to the November 1916 Canadian Corps questionnaire issued down to the battalion level on lessons from the Somme, the realities were abundantly clear to Canadian division and brigade commanders. Of the 52 responses to the questionnaire, only 5 did not either complain or make recommendations for improvements on how working parties were conducted.[3]

The response of the commander of the 72nd Battalion provided a telling example of the realities facing work parties. In one case and by no means a unique one, a work party had to march four hours to retrieve tools and another hour and a half to retrace their route. After the guides got lost another hour and a half was spent wandering the countryside in the dark before reaching the work site. In this case, out of eight hours only one hour of work was done. The commander used this example to refute the notion from various circulars, similar to the one endorsed by Haig, criticizing infantry officers for the poor productivity of work parties. These marches, especially later in October and November 1916 were conducted in conditions of thick mud. David Watson, commander of the 4th Division, estimated by November, the men of the division when they emerged from the front line had their equipment so encumbered with mud that it weighed 120 pounds or almost the same weight as the average soldier. 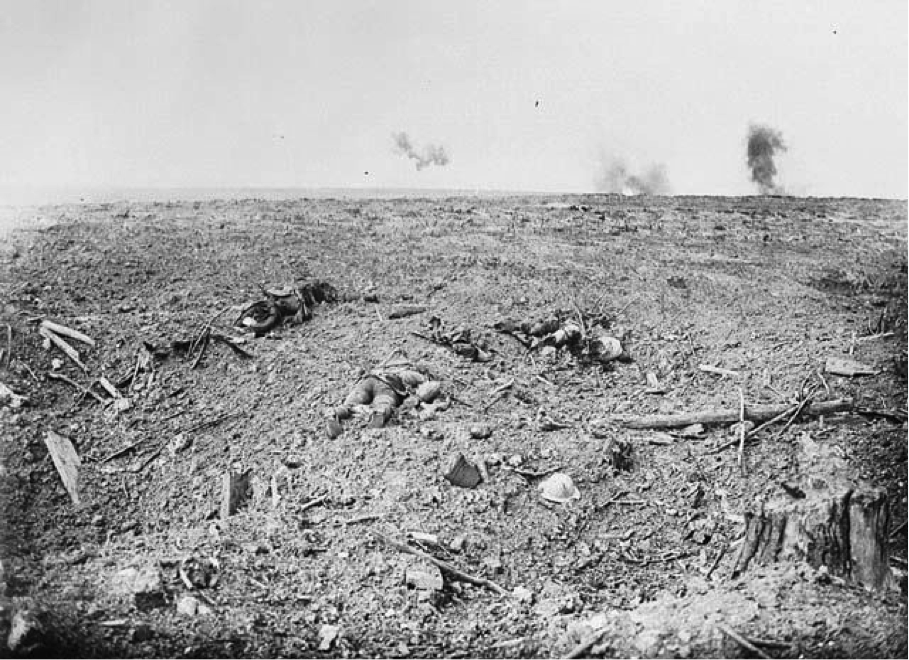 The ground situation in October 1916 before the rain. This was the wasteland through which an offensive had to be supplied, thus requiring work parties. [PA-000786 Library and Archives Canada]

The issue with work parties was threefold. First, the work that needed to be done was prodigious, as each advance required kilometres of new communications, assembly, and jump-off trenches, as well as repaired roads, new dugouts, extended tramways, gun positions, buried cable, and protected dumps. This all in addition to the need to repair damage caused by the German shellfire, heavy rain, and wear from excessive traffic on roads. There was always a constant struggle just to keep the infrastructure functioning let alone deal with further advances. 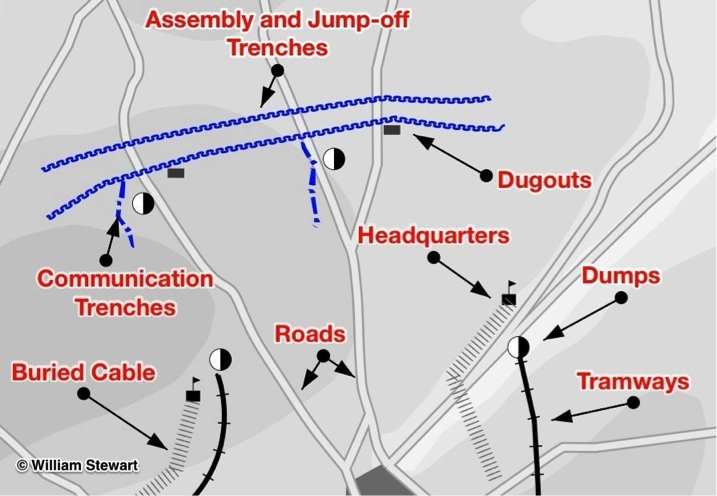 Some of the myriad tasks assigned working parties.

Secondly, the engineering, pioneer, and labour resources available to the Canadian Corps were exiguous in comparison to the work demanded. It must be remembered that the effort, especially in forward areas, was not assisted by machinery but was all done by shovel, pick, and axe. Each division had a pioneer battalion whose task was to provide the labour to carry out these many duties, but the scope of work was far in excess of what they could manage. In addition, each division had three engineer field companies filled with skilled tradespeople who provided the expert guidance but were not expected to, nor could provide the personnel to carry out the myriad tasks. This was not an approach that either the engineers or the infantry liked. As a result, large parties of infantry were demanded every night from units that were supposed to be resting or preparing for their next tour in the line. Even units shattered in an attack were still expected to provide working parties while out of the line. For instance, the 42nd Battalion suffered 430 casualties in its first tour on the Somme and yet was still expected to provide work parties despite its arduous service and attenuated state. In another example, the 3rd Brigade, woefully under strength with a trench strength of only 1910 other ranks in early October 1916, was expected to provide parties of 707, 656, and 503 other ranks on three successive nights while the brigade was out of the line preparing for an attack on 7 October.[4] In other words, every man in the brigade had spent at least one night on a work party.

The third factor was the abysmal organization and structure of the work, which was a strong indication of poor command practices. The staff made excessive demands on the infantry and increased their burden by doing a poor job of directing the work. A common complaint was that orders were issued so late in the day that it was impossible to survey the work site in the daylight. As a result, mistakes and delays were common, thus further reducing productivity. As the 72nd Battalion response phrased it, infantry were not expected to attack at night without reconnaissance but it was regularly expected of work parties.

A major issue was the provision of guides, or more accurately, the lack of guides and their incompetence. Rarely did work parties labour on parts of a sector they were familiar with and so required guides to lead them. Too often the working parties and guides were unable to find each other, so much so that a common suggestion from the questionnaire responses was to locate rendezvous points near headquarters or road junctions. Simply providing a map location was meaningless amidst a dark and obliterated countryside. In other instances, the guides were inept and could not find the work site, which lengthened the exposure of working parties to enemy shellfire and further exhaustion. A common recommendation was to form a corps of guides who were permanently stationed on a portion of the front. The issue was, with the rapid interchange of units, guides demanded from the frontline units often had no experience with the route to the work site, had no opportunity to go over it in daylight, and so had to guess. Also, large parties often ended up splitting up in the darkness and never reaching their objective.

Too many men were assigned to tasks so that troops marched two hours to the site for one hour work and then two hours back. Instead, a common recommendation was to use half the men and spend two hours labouring, which would be less frustrating for the men and exposed fewer to enemy shell fire. For instance, in his unpublished memoir one soldier complained that they were required to dig a communication trench in full view of the enemy after marching for seven miles, only to have to return a short time later that day to finish work that was left uncompleted. What it meant was that some men travelled 28 miles and still had to work while being shelled.

Adding to the sense of disconnect between the troops and the engineers was the corps’ policy of pooling resources. All the engineering, pioneer, labour, entrenching battalions and German prisoner of war units in the corps and divisions were under the command of the corps’ chief engineer and each division’s Commander, Royal Engineers was assigned a sector and units from the pool to command. This meant the engineering staffs had to work with unfamiliar units and their commanders, which contributed to the poor feelings between the engineer staffs and the infantry.

Work parties were a prime example of the failure of the army’s commanders and staff officers in basic man-management. There was insufficient labour to accomplish all the missions required, so there was no choice, but to use reserve or resting infantry for work parties. There was no indication that the BEF would tailor its offensive operations to the limits of its resources, such as labour. It was blatantly unfair and poor policy to blame the indifference of the soldiers for the lack of productivity. Much of the blame must be assigned to the staff for the poor organization, planning, and tardy issuing of orders for command. It was far too much to expect soldiers who were already exhausted to commit fully to a task for which so little attention to good staff work was invested. The reality of the Somme and the demand for the offensive operations meant the infantry had to be used, but it seriously handicapped their effectiveness in not allowing them to recover from their exertions at the front and prepare for the next offensive.

As a question to the reader, what options did the army have to lessen the load on the infantry or at least improve the staff work?