“Just How Did the War of 1812 Start?” An Introduction by Terry Copp

To understand the conflict that led to the War of 1812 we must begin with the Treaty of 1783 that ended the War of Independence. The treaty was deliberately generous to the Americans. Recognizing their independence was a military necessity that other clauses, especially the transfer of the territory between the Appalachians and the Ohio River to the United States ignored the interests of the First Nations who had fought for the British and the Québec-based fur traders. The British Prime Minister, Lord Shelburne’s was convinced that the British Empire would best be served by free trade and harmonious relations with the United States. A peace treaty that gave Americans everything they could wish for would guarantee good relations and prosperity for Britain within an informal “empire.”

A flag flies over Fort Meigs, Perrysburg, Ohio, in May 2012. Photo: Nick Lachance

This strategy was challenged by Shelburne’s opponents, particularly British shipping interests, and the government fell. His successor, William Pitt the Younger, generally agreed with Shelburne but had to compromise. The Navigation Acts excluding American ships from trade within the Empire were enforced, Orders-in-Council restricting neutral rights to engage in trade with France and its allies passed, and British troops ordered to retain control of forts in the Ohio Valley encouraging First Nations to oppose American expansion into the region.

When revolutionary France declared war on Britain in 1793 there was a new incentive to avoid conflict with America and Britain signed a treaty promising to evacuate the Ohio Valley and arbitrate other differences. Jay’s Treaty was widely opposed in the United States as it failed to deal with the trade restrictions, the impressment of seamen from American ships, and the seizure of American vessels caught trading with France. Thomas Jefferson and James Madison were the leading critics of the treaty and they begin to shape a political party, the Republicans, in opposition to the dominant Federalists.

Meanwhile, American military power was brought to bear on the First Nations. General Anthony Wayne and his troops overwhelmed Shawnee and Delaware warriors at the Battle of Fallen Timbers. First Nations leaders were forced to accept the Treaty of Greenville which ceded most of Ohio and gave the United States additional blocks of territory beyond the “Greenville Line.” By 1796, British troops had withdrawn to St. Joseph’s Island and Amherstburg and Fort George, but British ‘Indian Agents” maintained relationships with First Nations living south of the border.

The unresolved differences between the British Empire and United States of America escalated after the resumption of war between Britain and France in 1803. Nelson’s destruction of the French and Spanish fleets at the Battle of Trafalgar in 1805 removed any challenge to Britain’s control the seas and the Royal Navy was told to prevent foreign, especially American, shipping from supplying Britain’s enemies. The United States responded to this with a series of restrictive trade measures intended to force Britain to recognize the rights of neutrals. This strategy failed to have any impact on the British government which was totally focused on the life and death struggle with Napoleon Bonaparte.

The most serious single incident in this cold war occurred in 1807 when HMS Leopold tricked the U.S. Navy’s frigate Chesapeake into stopping and then demanded the surrender of alleged deserters. When the American captain refused, the Leopold fired several broadsides and killed three crew members. This unprovoked, illegal attack was certainly grounds for war, particularly since the British government failed to make immediate restitution but President Thomas Jefferson was determined to avoid a hot war, simply ordering British warships to leave American waters.

James Madison succeeded Jefferson as President in 1808. Madison continued Jefferson’s policies but he lacked the personality and loyal support that marked Jefferson’s tenure. He was also faced with a revival of the Federalist party which favoured cooperation with the British war effort. Continued British involvement in the American Northwest was a second source of tension. Madison, like Jefferson, genuinely believed that the First Nations in the Ohio and Mississippi valleys needed to accept the reality of American settlement, give up their traditional way of life and their land. He insisted that the First Nations living beyond the Greenville Line were “always free to say ‘no'” to selling their lands but the actions of his government, the settlers and land speculators revealed the hypocrisy of this policy.

The Americans, who had obtained the vast Louisiana Territory by purchase from France in 1803, assumed that the lands between Appalachians and the Mississippi River would soon be settled and they were determined to obtain the consent of the First Nations by purchase, or outright force. William Henry Harrison, who was appointed Governor of the sizable Indiana Territory in 1800, was a principal agent of American expansion. After the Chesapeake incident in 1807 he was convinced that British intrigue was responsible for First Nations resistance to his plans for further land acquisition and his views were shared in Washington.

Why did the President of the United States, who knew his country was deeply divided on the issue, seek congressional support for a declaration of war? The immediate cause was the growing conflict within Madison’s own party orchestrated by a variety of “malcontents” unhappy with Madison’s leadership. The arrival in Washington of a new British Ambassador, Augustus Foster, offered a chance of avoiding war but when Madison learned that Foster’s instructions were to settle the Chesapeake affair and not to restore the rights of neutrals or end impressment, Madison decided to call Congress into session in November 1811. He declared that “the time has arrived to put the United States into armor” by expanding the regular army, militia, and navy while increasing the supply of war materiel, especially weapons and ammunition for land warfare.

The message pleased the Speaker of the House, Henry Clay of Kentucky, and other young congressman from the south and west known as “Warhawks” but it did little to persuade members to agree to the taxes necessary to finance a war. By 1 June 1812, when Madison asked Congress for a formal declaration of war, little had been done to prepare for armed conflict. Opposition from the Federalist leaders in New England and anti-Madison Republicans had grown as the votes for war, 79-49 in the House and 19-13 in the Senate, illustrated. 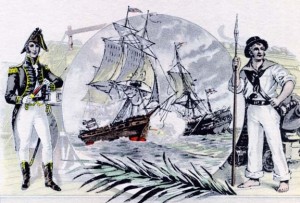 Madison’s war message listed familiar grievances: impressment, illegal blockades, the Orders-in-Council restricting neutral trade, and the responsibility of British Indian Agents for the renewal of warfare on the Western frontier. None of these issues were new or particularly acute, so why did the United States decide to try and invade and occupy Great Britain’s North American colonies in 1812?

The most persuasive answer is offered by University of Virginia historian J.C.A. Stagg who is editing the Madison Papers. His book, Mr. Madison’s War, is the most comprehensive study of the politics of the era available. Stagg writes:

with a total population of barely half a million, the various provinces of Canada seemed to be the weakest links in the chain of British imperial power and many Americans assumed that they could be easily seized by the United States with its vastly superior population of nearly seven and one half million. Yet Canada did not seem in itself to be the source of the most important grievances that the United States wish to settle by war… For this reason, most opponents of the war never ceased to point out that the conquest of Canada promised neither to guarantee respect for American maritime rights nor even to reimburse the nation for the expense of the effort.

Stagg argues that for Madison “the policy of a Canadian war followed logically from his previous diplomatic strategies.” American policy under both Jefferson and Madison had been based on the assumption that the British Empire needed raw materials from North America. Legislative efforts to restrict British access to these resources had failed partly because the Canadas and adjacent parts of the northern United States provided the wheat, timber, and other commodities the British required. Once Canada was conquered, Madison believed the British would have to make peace on American terms both at sea and on the western frontier.

Madison’s belief that the conquest of Canada would force the British Empire to redress American grievances and respect American sovereignty was based more on hope than evidence. His ideas about military operations to achieve strategic objectives were equally uncertain. If Britain was to be dislodged from North America, the key objectives were Québec City and Halifax yet neither Madison nor his Secretary of War, William Eustis, had even the vaguest idea of how these citadels of British power might be taken. Given the strength of the British fleet no seaborne attack on Nova Scotia was possible and New England’s opposition to the war made an advance from Maine into New Brunswick highly problematic. To approach Québec the Americans first needed to capture Montréal and perhaps Kingston before advancing east to Québec. There they would have to deal with the British fleet as well as the city’s formidable defenses.

The Republican war enthusiasts ignored such obvious realities comforting themselves with simplistic and bombastic statements such as Henry Clay’s declaration that “the militia of Kentucky are alone competent to place Montréal and Upper Canada at our feet.” When questioned about how this was to be accomplished much emphasis was placed on the belief that both French and English-speaking Canadians would welcome Americans as liberators. The small number of British regular soldiers in Canada would be overwhelmed by American patriots, however inexperienced. The war was to be a coming-of-age ritual allowing a new generation of Americans to display their manliness.

The man selected to command the vital northeast theater of war stretching from Buffalo to the New England coast, Henry Dearborn, shared none of the optimism and enthusiasm of the Warhawks. Dearborn had fought in the Revolutionary War and had been captured at the Siege of Québec in 1776. After he was exchanged for a British captive Dearborn fought with distinction joining Washington’s staff in 1781. He served as Secretary of War in Thomas Jefferson’s administration and retired to become Collector of Customs in Boston in 1809.

Dearborn is usually written off as an aging incompetent plagued by indecision. Derided as “Ganny Dearborn” he is said to have failed to provide the kind of leadership required to achieve victory in 1812 or 1813. It is however possible to look at Dearborn as a realist among dreamers. As Secretary of War he had presided over the reduction and reorganization of the army including the abolition of the office of Quartermaster General. He was well aware that under his successor William Eustis the War Office was understaffed and poorly organized, reliant upon civilian contractors for food, clothing, and equipment. He also knew that the regular Army, the only force that might be capable of confronting British professionals, had an effective strength of less than 7000 men, many of them in the south or in posts on the frontier. Congress had authorized an “additional army” of 25,000 men in January 1812 but enlistment was slow and training barely begun. As late as November 1812 only 9,823 new recruits had enlisted.

Dearborn did not believe the various state militias could provide an effective means of conquering Canada but under pressure from the President he authorized a three-pronged invasion of Canada with advances from Detroit, Buffalo, and Albany. If an attack from Detroit could be coordinated with an advance on Montréal and an assault across the Niagara River, the British might be stretched beyond the breaking point. Perhaps problems with manpower, logistics, divided command, and poor leadership could be overcome by simply marching north!