Louisbourg: A Psychological Turning Point in the Seven Years’ War by Sam Derksen

Louisbourg: A Psychological Turning Point in the Seven Years’ War

On 1 June 1758, a massive British flotilla consisting of over 150 ships and thirteen thousand soldiers waited in Gabarus Bay. Louisbourg loomed in the distance. Stirred up by gale force winds, waves crashed against the shore of Île Royale (Cape Breton), making the normally treacherous landing impossible. Major General Jeffery Amherst would have to postpone the British assault on the imposing French fortress. 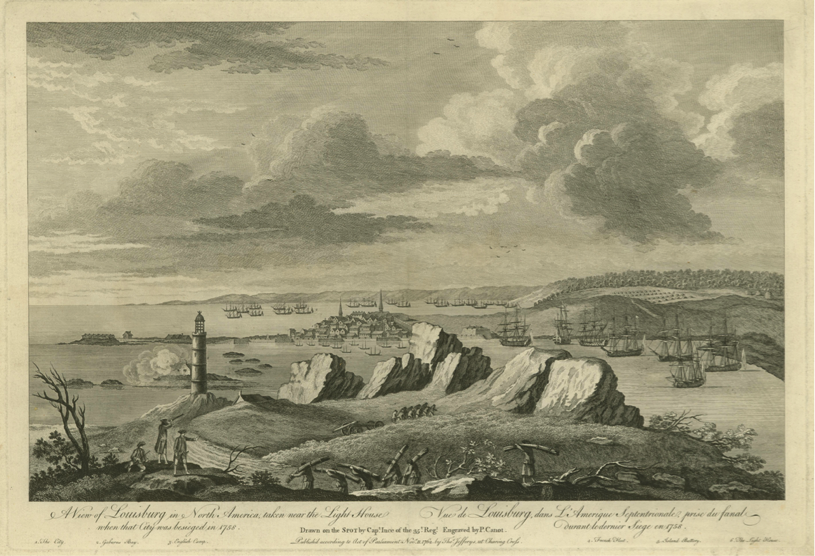 Charles Ince, “View of Louisbourg in North America taken near the Light House when the City was besieged in 1758, John Carter Brown Library,” 1762 November 11, Archive of Early American Images, #6368.

Louisbourg was the preeminent symbol of French imperial power in North America. Built on a rocky low-lying spit on the eastern coast of Île Royale, Louisbourg was one of the most heavily fortified strongholds on the continent. Numerous batteries protected the fortress and its harbor from enemy attacks. If these preliminary defenses were overrun, thirty-foot stone walls surrounded the city. Jutting out of these fortifications were six bastions to stave off attackers. Despite its capture in the War of Austrian Succession thirteen years earlier, the French upheld Louisbourg as the bulwark of Canada, a formidable fortress defending the heart of New France in the St. Lawrence Valley.

The British flotilla arrived at Louisbourg after a series of defeats in the North America. Following the outbreak of hostilities in the Ohio Valley in 1754, French soldiers (troupes de la marine and later troupes de terre), Canadien militia, and their Indigenous allies, won decisive victories against the British at Fort Duquesne in 1754, Monongahela in 1755, Fort Oswego in 1756, and Fort William Henry in 1757. By 1758, British officials in North America were discouraged and army morale was low. The Governor of Massachusetts Bay, Thomas Pownall provided a vivid description of the British position in North America. He stated that the various losses in the interior “have intirely [sic] excluded the English from Cammand [sic] in the Continent and all Power over the Indians and have confirmed the Dominion of America to the French.”[1] Although certainly hyperbolic, Governor Pownall’s statement indicates how many British officials and soldiers perceived the military landscape in North America leading into the Louisbourg campaign.

Despite their successive defeats, British officials believed that Louisbourg’s capture had the potential to swing the balance of power in North America. On 3 February 1758, the British Secretary of State, William Pitt, instructed Admiral Edward Boscawen, “You will not omit attempting to Force the Harbour of Louisbourg . . . as the success of that operation will greatly tend to shorten and facilitate the reduction of that place [New France].”[2] Two months later, Lieutenant John Knox provided a clear and concise description of Louisbourg’s importance in the minds of the British army. He argued that taking Louisbourg “would be the reduction of Canada.”[3] Located at the mouth of Gulf of St. Lawrence and New France’s only year-round port north of New Orleans, British officials understood that Louisbourg’s capture would disrupt France’s supply lines to Canada, and paralyze France’s war effort in North America.[4]

On 8 June 1758, after nearly a week of impassable weather at Louisbourg, Brigadier-General James Wolfe was instructed to lead a landing party towards Fresh Water Cove (Kennington Cove). At 3:30 AM, several hundred British grenadier boats rowed towards shore in the wake of a heavy British bombardment. Under heavy French fire, Lieutenant Christopher Atkins, at the rear of Wolfe’s division, spotted a beach twelve yards wide that would allow the British to land under the cover of Cap du Rouge. A force of about forty soldiers landed, and scrambled up the steep fifty-foot embankment. This aggressive maneuver forced the party of Frenchmen and Mi’kmaq defending the cove to retreat, securing a landing area outside Louisbourg for the British. This initial foothold allowed the British to slowly consolidate their forces on land and eventually to besiege Louisbourg. Forty-nine days later, on 26 July 1758, after ten consecutive days of heavy bombardment, Governor Augustin de Boschenry de Drucour capitulated, surrendering Louisbourg to the British.[5] 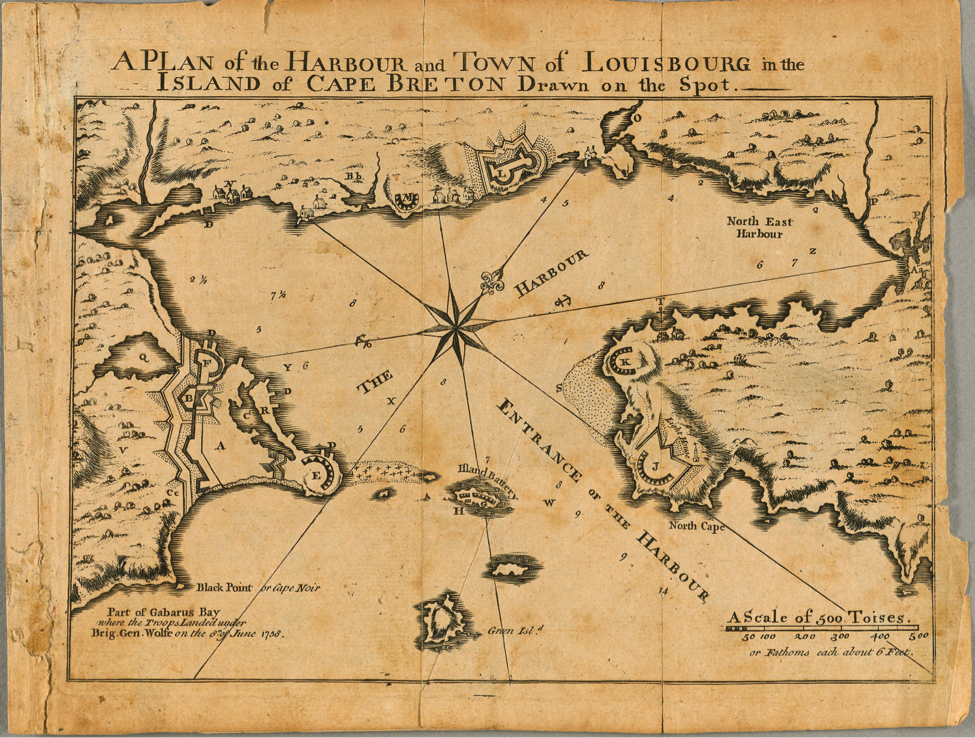 Although Louisbourg represented a strategic military victory for Britain, Louisbourg’s capitulation also contributed to a renewed British sense of martial superiority in North America. The Siege of Louisbourg transformed the French in the eyes of the British from powerful and sophisticated military tacticians to dishonest, weak, feeble, and incompetent combatants. British officials spoke derisively about French military tactics and martial abilities during and after the Siege of Louisbourg. Writing to General Amherst, Wolfe stated, “When the French are in a scrape, they are ready to cry out in behalf of the human species; when fortune favours them, none more bloody, more inhuman.”[6] Similarly, General Amherst criticized the poor French tactics at Louisbourg: “I desired the men not to throw away their Ammunition firing at great distances because the French were fools enough to do it.”[7]

Furthermore, Louisbourg’s surrender marked a shift in British perceptions of military power in North America. After the Siege of Louisbourg, Wolfe commented, “Such advantage might be made of our present superiority as the enemy would not easily recover, and a peace may be procured.”[8] British Captain Isaac Barré, argued that the after the fall of Louisbourg: “The enemy have now, both by sea and land, sustained a fatal blow in America.”[9] After Louisbourg’s capitulation, General Amherst believed that New France was vulnerable, and Britain could consolidate power in the St. Lawrence. He told Admiral Boscawen that he wanted to “ . . . get the Prisoners on board as fast as possible, and . . . for the Army to go to Quebeck [sic].”[10]

Louisbourg’s capitulation in the summer of 1758 fundamentally altered the military landscape in North America. The French surrender amongst Louisbourg’s crumbling wreckage not only gave Britain control over a key strategic outpost in North America, but perhaps more importantly, altered the British perception of North American military power. After four years of devastating defeats, Britain’s capture of the imposing fortress instilled British officials and military officers with a renewed confidence and belief that they had the ability to conquer New France. This shift in mentality influenced and empowered the successive campaigns against Quebec and Montreal in 1759 and 1760 respectively, which culminated in the British conquest of New France.

[4] Prior to the Fall of New France, the term Canada was used to refer to the series of French settlements in St. Lawrence River Valley, including Montreal and Quebec.