On War & Society E17: Why Military Families Matter, Part I 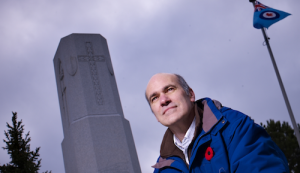 Soldiers returning from the battlefield rarely return unscathed. Yet veterans’ families continue to be inadequately prepared for the difficulties of military life. For episode three of four on the past and present experiences of veterans in Canada, two scholars and two veterans discuss the effects of veteran deployment and eventual discharge on military family well-being. Their discussion reveals the need to listen to military family advocates to better inform policy, but also how many military families are unaware of the financial and emotional support available, and the fear of admitting vulnerability that sometimes prevents veterans and military families from receiving the therapeutic, financial and community assistance they require.

This episode in funded by the Department of National Defence. It is hosted by Dr. Geoffrey Hayes (pictured) of the University of Waterloo. Panelists are Dr. Jessica Meyer, Dr. Deborah Norris, Jody Mitic and Kim Davis.

Geoffrey Hayes is a graduate of Wilfrid Laurier University (BA/MA), and is currently an associate professor of History at the University of Waterloo. He is the author the Lincs: A History of the Lincoln and Welland Regiment; Waterloo County: An Illustrated History, as well as the co-editor of Vimy Ridge: A Canadian Reassessment; Canada and the Second World War: Essays in Honour of Terry Copp. His most recent book is Crerar’s Lieutenants: Inventing the Canadian Junior Army Officer, 1939-45.