Photography on the Front Lines (Part 4): the Second World War

Photography on the Front Lines (Part 4): The Second World War

In previous posts, I discussed war photography’s emergence in the Crimean War, the American Civil War, and the First World War. This post examines the formation of the Canadian Army Film and Photo Unit in the Second World War, and how that system of information operated.

Photographic technology developed drastically between the First and Second World Wars. During the 1920s, lightweight, rapid-firing cameras like the Leica (1925) and Rolleiflex (1928) became available for purchase. As a result, the 1930s saw the birth of pictorial magazines—such as Life, in 1936—and photographers like Robert Capa and Henri Cartier Bresson became household names.

The precedent set during the First World War for photographs in the news, combined with the relative saturation of images in weekly illustrated magazines meant citizens at home expected to see pictures of war. Photographers’ technical ability to deliver had improved dramatically. 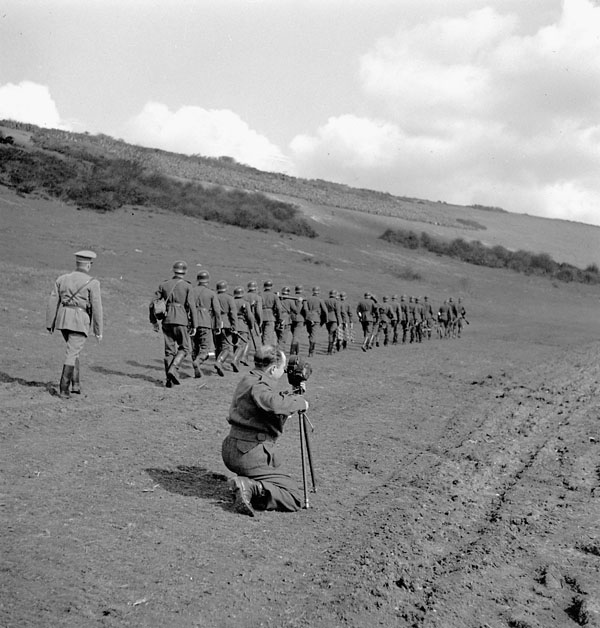 As their predecessors had in 1914, soldiers of the Second World War had experience using basic cameras. Government and military leadership feared what information could be leaked, but the official war photography unit that was established during the First World War had long since been disbanded. An equivalent was found in the Canadian Military Public Relations Organization and its civilian counterpart, the Canadian Bureau of Public Information (later the Wartime Information Board). 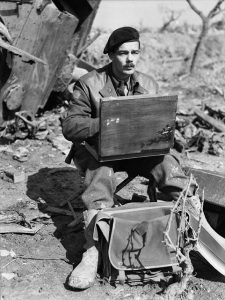 The Military Public Relations Group went on to appoint photographers, while the Canadian Army Film Unit recorded events with motion-picture cameras. The two organizations merged in 1943 to form the Canadian Army Film and Photo Unit (CAFPU). Each branch of the military—army, air force and navy—appointed its own photographers and cameramen. Usually two cameramen were paired with a photographer, and each unit had a driver and the support of film-developing technicians. No military photography or film unit existed prior to the outbreak of war, but by 1945 more than 200 individuals contributed to the effort.

Photographers were given specific assignments—based on the twin desires of promoting the Canadian military effort and historically documenting its activities. Numerous letters and memos from CAFPU Major Gordon Sparling tell us that photographers were asked to get images of Red Cross personnel, Canadian Women’s Army Corps, sporting events and specific officers, particularly Montgomery and Eisenhower. Some of the photographers were stationed in Canada to record the British Commonwealth Air Training Program, the nation’s major war contribution, while others tested new types of film, or were given the prosaic task of making ID photographs. 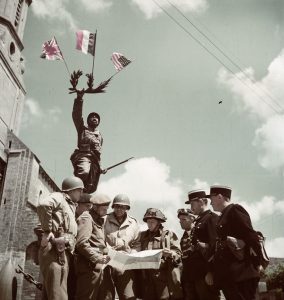 Allied Officers by World War One War Memorial in Normandy. Department of
National Defence/ Library and Archives Canada/ MIKAN 4233201. Canadian
photographers were also tasked with taking propaganda shots, often in colour.
The project continued into the Korean War, and the photographs are arranged
under the “ZK Prefix” at Library and Archives Canada.

In Europe, one of the CAFPU’s first assignments was to record the Dieppe raid. Cameraman Alan Grayston and photographer Frank Royal trained with the troops in advance of the attack, but, as historian Dan Conlin states,

When high command cancelled plans to send Grayston and other Canadian cameramen on the Dieppe Raid, he got so angry at the film unit headquarters that while waving his hand gun around it went off and he fired three bullets through the glass door of his commander. However, he was so respected in the unit that he was just demoted from Sergeant to Private for a few weeks and then sent back into the field with his camera.[1]

Royal was unable to even land on the beach on Aug. 19, so he captured scenes of the battle in the distance from his ship. All extant images of the failed raid were taken by the German defenders.

The invasion of Sicily in 1943, codenamed Operation Husky, gave Canadian photographers another chance to record the overseas action. Royal and Grayston were both on hand to photograph the Canadian forces, Despite transportation issues that made it difficult to capture as much footage as they would have liked, their work brought international attention to the CAFPU, and nine cameramen and photographers remained on hand to record the Battle of Ortona in December 1943.

Other members of the CAFPU returned to Britain in anticipation of the June 6, 1944, invasion of Normandy. On the morning of June 6, three main teams landed on Juno Beach—photographer Don Grant and cameraman Bud Roos landed first with the Royal Winnipeg Rifles, while cameraman Bill Grant and photographer Frank Dubervill were sent in with the Queen’s Own Rifles. Grayston and Ken Bell landed with follow-up troops. Other photographers and cameramen associated with the Navy, including Gilbert Milne, were also on hand. Each team landed at different parts of the beach to gather comprehensive coverage and to reduce the risk of mass casualty. 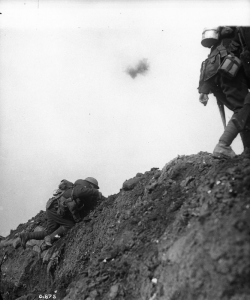 Lieutenant R.O. Campbell (left) of the Canadian Army Film and Photo Unit and
Corporal H.H. Mowbray with a movie camera mounted on the turret of a
Sherman tank near the Hitler Line, Italy, 23 May 1944. Photograph by Lieut.
Strathy E.E. Smith/ Dept. of National Defence/ Library and Archives Canada/MIKAN 3206658.

As the first Canadian cameraman to land on the beaches of Normandy, Bud Roos remembered “you can hear funny little bees running by your ear, and my only thought was ‘Why are people dropping here and here and why am I still walking?’ but I kept walking anyway.”[2] Of the 30 men in his assault craft, only he and two others made it ashore alive. His camera would not work, and he abandoned it to help the injured.

Roos’ partner, Don Grant, landed with two cameras. His Speed Graphic was ruined when his landing craft toppled into a sandbar—he was thrown into the water while many of the men behind him in the landing craft fell pray to enemy machine gun fire. Grant had a Leica tucked inside his battle dress blouse, and began shooting.

The Canadians scooped D-Day—correspondent Ross Munro’s written account and Bill Grant’s film footage made it to North America before any others. This speedy transmission was primarily because the chaotic nature of the American beaches meant that none of their footage made it out as quickly. When the offices of Life magazine received press photographer Robert Capa’s four rolls of film depicting the Americans landing on Omaha Beach, they were rushed through the dryer and destroyed. Eleven were salvageable, of which only nine exist today.

Despite speedy transmission, the CAFPU had to deal with wartime censorship. Images of the war were considered to have the power to make or break morale and the ability to reveal military intelligence. Upon passing the censor, however, images were made available to soldiers as well as the press. For the rank and file, albums of contact sheets were sent to field offices and orders were sent through commanding officers. Prints were then processed in the field. 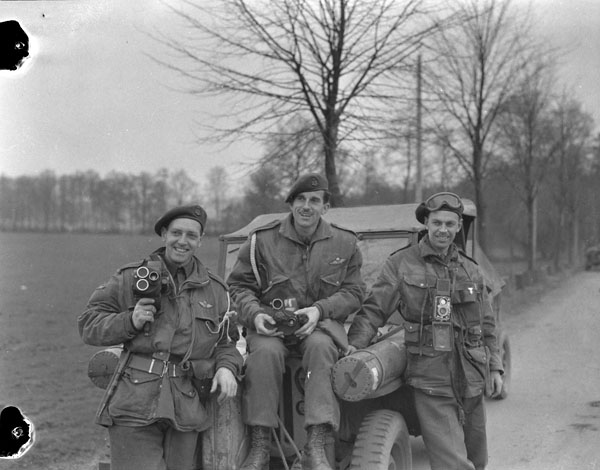 In all, official photographers made more than 200,000 negatives during the war, which are now housed at Library and Archives Canada. The film unit’s footage was given to the National Film Board after the war, but it was destroyed during a fire in 1967. Its wide wartime distribution of the film means that some of the work has survived.  This output was not without great sacrifice—photographer Terry Rowe was killed in February 1944, and Jack Mahoney was killed that April. Cameraman Jimmy Campbell was killed that July.  Bud Roos left Europe after suffering a nervous breakdown, and Bill Grant and Bill Cox were each taken out of the war with injuries.

Carla-Jean Stokes has a Masters of History from Wilfrid Laurier University, as well as a Masters of Photographic Preservation and Collections Management, from Ryerson University. Carla-Jean won the 2015 Photographic Historical Society of Canada thesis prize for her paper, “British Official First World War Photographs, 1916-1918 Arranging and Contextualizing a Collection of Prints at the Art Gallery of Ontario.” Her special collector’s edition, “War Photos,” was published by Legion Magazine in May 2016. She works as Curator of the Historic O’Keefe Ranch, in Vernon, BC.

[1] Dan Conlin, “Fighting the Second World War with their cameras