President and Vice President of the Conflict Studies Association

This past summer we were part of the fortunate group that was able to travel to Europe in order to learn about the events of the First and Second World Wars and also to see how they are now commemorated. This is a rare opportunity not only to see these sites, but also to experience this with a great group of fellow students and instructors. In this blog we hope to briefly share with you some of the experiences and emotions that we felt on this trip. Following this blog there will be several blog posts with pictures from other students on the trip, accompanied by their thoughts on the sites. 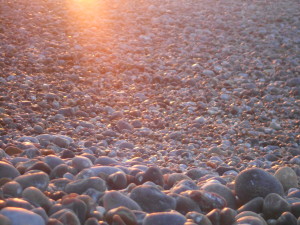 Sunset on White Beach Dieppe. Gorgeous sunset on the rocks.

Nearing the end of the tour many felt that twelve days was simply not enough time to fully comprehend the intricate events and memories created by the First and Second World Wars. The Battlefield Tour was an important trip to go on because when studying events like these Wars in a simple classroom, one can get caught up in the facts to learn for the next test or exam. This can lead the student to  forget or overlook how these facts play into the rest of the war. To look at the bigger picture, a broader classroom is needed. In a greater understanding of the war we believe that it is important to see the battlefield sites, as a line on a map back home in Canad

a seems a lot longer than a line on the ground in France. It can be hard to conceptualize the geography without being present on the battlefield.

Standing on the ground was where the emotional connection came into play. We believe this is one of the most important features of the Battlefield Tour. Being on the actual ground where thousands of soldiers died can have a tremendous impact upon the individual witnessing the site. A description of a beach such as Dieppe can be left up to the imagination but unless one stands on the actual site, the realization of how difficult it was to storm the beach does not occur to you. This visual lesson on the ground allows the student to fully comprehend what happened and perhaps may lead to more in-depth and thought-provoking questions which create powerful emotional responses.

Dieppe is a great example of a site provoking an emotional response. It was the place that we both felt the full meaning of the trip and the reality of where we were. It also shows the difficulties of the relation to the written word and seeing a place first-hand. To see the very beach where so many Canadians lost their lives was a very tough scene to take in. The difficulty in walking up the beach in a pair of running shoes, not to mention without any equipment on our backs or dodging fire from all directions, was shocking. It would have taken a lot of strength mentally and physically to perform the attack. This was saddening for both of us as we had difficulties leisurely strolling this beach. Sitting and reflecting upon this was enough to cause the shedding of a few tears. 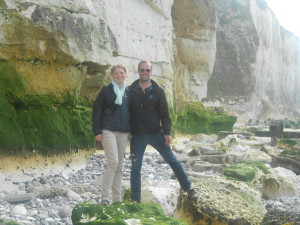 Essentially the Battlefield Tour was one of the greatest and most meaningful experiences of our lives. This blog does not fully do justice to the experience, in fact it represents only a fraction of what we and our classmates experienced. We encourage you to follow the blog and learn of our peers’ individual reactions. We would also like to thank our peers and the instructors who embarked with us on this journey, as well as Laurier Centre for Military, Strategic and Disarmament Studies and Wilfrid Laurier University for such an amazing opportunity to explore a part of Canada’s involvement on the world stage.