Causes and Consequences of the War The first stop on this year’s Cleghorn War and Memory Study Tour was the Historical Museum in Peronne, France. The museum compares and contrasts German, French, and British perspectives from the end of the Franco-Prussian war in 1871 to the terms of the armistice at the end of the First World War. The museum presents the longstanding, common view in English language histories that the war erupted from a collision between imperialism, nationalism, militarism, and the web of alliances found among all major European nations in 1914. In sum, all belligerent nations were equally responsible for the outbreak of the war, considered by many to be inevitable. The notion that all nations share equal responsibility for the war has been challenged by historians since it came into being. One of the problems with this explanation is that it buried the story of German atrocities committed against Belgian civilians during the first weeks of the war. Certainly those stories were well publicized during the war itself. Both the Allies and Germans used incidents of ‘atrocities’ as propaganda to justify their conduct and participation in the war. German soldiers claimed that Belgian ‘franc-tireurs’ fired on them as they passed through certain towns. Worse, Belgian boys and girls were purported to have mutilated wounded and dead German soldiers. On the other hand, the Allies published stories of German mutilation of Belgian boys – stories of how the hands of Belgian children were cut off when they were caught bringing food to Belgian soldiers. I have seen these stories in newspapers from the era. There is little to no evidence that any of those incidents actually occurred. Although the stories of mutilation are unsubstantiated, the latest research indicates that German soldiers did in fact brutalize the civilian population in eastern Belgium in the early weeks of the war. Unfortunately after it became well known that the stories of mutilation were fabricated for propaganda purposes, the plight of Belgians who did suffer at the hands of the German invaders was dismissed. 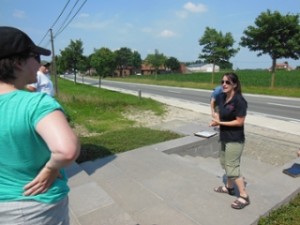 Cindy lecturing at the British 7th Division Monument on the eastern edge of the Ypres salient.

The evidence and witness testimony from 1914 reveals that the Germans Army units massacred civilians in the first days of the war in some quantity. Between 19-26 August, the Germans executed 6,000 Belgian civilians and deliberately burned more than 25,000 homes and buildings in more than 800 communities in the eastern portion of Belgium. Civilians – men, women, and children – were rounded up, used as human shields, massacred, and brutalized during this period. To be clear, these acts came over and above the loss of lives and property on the front line itself.
Why did the Germans massacre Belgian civilians in the opening days of the war? Is it because the Belgians refused to accept the ultimatum? Did Belgian civilians actually fire on the Germans?
Does this new evidence change our understanding of the causes and consequences of the First World War?
It is unlikely that historians will ever be able to definitively answer all these questions after 100 years. The understanding of what happened to Belgian civilians in the opening days of the war does change our perspective about the First World War. Despite the passage of time, exciting research continues to be done and new questions are posed about the war.
Sources:

Cindy Brown teaches at the University of New Brunswick and works for the Gregg Centre. Her research centres on the impact war has on the civilian populations in its midst. She, along with Blake Seward, Lee Windsor, and Alan Sears, is one of the instructor/guides on the Cleghorn Study Tour for high school teachers held annually in France and Flanders.
Find more blogs on the Cleghorn Study Tour on the Gregg Centre for War and Society’s website here.