Exercise ReForGer Part I: NATO Protecting Europe in the ’70s 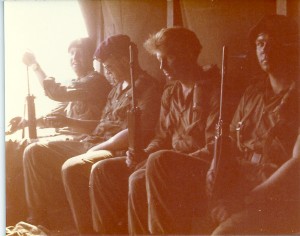 Soldiers in the back of a deuce and a half returning from a ReForGer
exercise. (very tired)

I arrived in Germany to join the 3rd Mechanized Commando in September 1975. It was a cold dreary day and I was expecting some time to acclimatize myself to my new home but, that was not to be. I was hoping for a little less excitement having just spent 6 months in Cyprus following the invasion of Cyprus by Turkey in 1974. During this time we were constantly working to keep the warring sides from doing grave damage to each other, or us.

Unbeknownst to me, I was about to be a part of one of the largest military exercises in peacetime Europe.

I flew into Lahr West Germany from Wolseley Barracks in London Ontario. I was picked up, along with 2 other soldiers, and driven to the Airbase in Baden-Soellingen.

The base was set up in the early 1950s to meet Canada’s NATO commitment. It was never meant to be a Canadian base. The home for the Canadian Air force was supposed to be at Pferdsfeld but it was being built and behind schedule. France had Air units in Baden-Soellingen and it was decided by NATO to relocate them for a short time and move the Canadians to that location. Six months after the Canadians established themselves in Baden, NATO decided they would stay there permanently. One wing of fighter jets consisting of three fighter squadrons was housed at the base. Our purpose, as infantry, was to defend the Airbase if hostilities erupted with our Soviet neighbour. 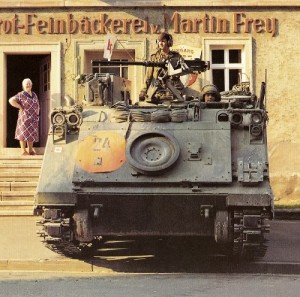 Armoured Personnel Carrier set up in a town during ReForGer. The German people in a town of 1000 people would wake up in the morning and find about 1000 armoured troops, APCs and tanks parked in the village.

I arrived at the base and immediately was assigned to A Company 2 Platoon. The battalion was about to be deployed for ReForGer (return of forces to Germany) and me with it. Never mind that I had never been involved with a Mechanized army unit before and didn’t know anyone. The large ReForGer exercise was based on the premise that the Soviet Block had attacked NATO and we needed troops in Germany fast. An air bridge was set up to fly thousands of troops from all the NATO countries into Germany.

The US flew in the 1st Infantry Division which was mechanized, the 1st Cavalry Division, the 2nd Marine Division/32nd Marine Amphibious Unit. This totaled approximately 47,000 troops. Add the 6,000 American troops who were already in place in the form of the 3rd Armored Division Frankfurt-am-Main, the 3rd Mechanized Infantry Division stationed in Wūrzburg and, from Nuremberg, the 2nd Armored Cavalry Regiment. The Canadians flew in troops from different regiments in Canada as well as militia units. Britain also flew in a number of British troops. The German army activated the Territorial Army which was organized into six divisions (8th, 9th, 11th, 14th, 15th, and 16th Jaeger Divisions. These units were not under NATO command but under the German high command. 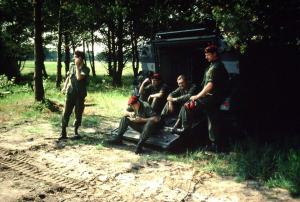 Relaxing during a lull in the exercise.

Our 3rd Mechanized Commando was a strange beast, not like the normal battalions in the Canadian army. Its total life span was only 7 years and came into existence with the stroke of a pen by a politician in the late 60s when units of the Canadian Army were being cut back. Some leftover units of both the Royal Canadian Regiment and Princess Patricia’s Canadian Light Infantry had no home so they were attached to the Airborne Regiment as 3rd Mechanized Commando and stationed in Baden. From that point on you could rest assured it would be a bumpy ride for the armoured vehicles and all their occupants. Being designated as part of the Airborne caused a lot of strife between the paratroopers, who had worked so hard to earn their maroon beret, and the armoured infantry soldiers who had never jumped out of a plane or even wanted to but had been given a maroon beret anyways. The real Airborne Regiment soldiers always thought of 3rd Mechanized Commando as a type of bastard child, one that was tolerated but not necessarily loved. 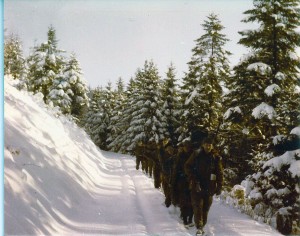 A snowy walk in the mountains of Germany.

The other issue with 3rd Mechanized Commando was that soldiers were always rotating in and out of the unit. Since it was a mix-up of units thrown together, the soldiers did not spend the usual four year tour as a group which would be rotated back to Canada. As people left 3rd Mechanised Commando in dribs and drabs, the unit drew new volunteers from all the units in Canada. This was the same process used by the U.S in Vietnam and it was not a good model. Eight soldiers would leave Germany and go back to their units in Canada, two to the PPCLI in Edmonton, three to the RCR in London Ontario and three to the Airborne Regiment. They would be replaced by people from all different units in Canada. When they arrived they would not know anyone and would be placed in a group of established soldiers. As the new man on the block you always had to prove yourself. This would happen on a monthly basis so Sections, Platoons and Companies were always in a state of flux. Sometimes soldiers did not even have a chance to form a bond of trust which was very important when you were putting your life in the other person’s hands. 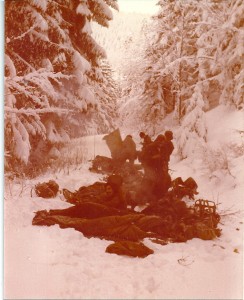 Sleeping in a snow bank after an 18 hour forced march down a very steep mountain. In the sleeping bag, boots and all.

The ReForGer exercise was already started and I, like my comrades who had just rotated in, were dropped into this melee. I did not have any equipment with me, nothing but the clothes on my back. The stores man had pity on me and issued me some temporary kit. It was about 2 degrees below freezing. I was loaded on an M-548 Cargo Carrier. This vehicle was a variation of the Armored Personnel Carrier M113, same chassis but made for transporting supplies.

Check back in the coming weeks for ‘Part 2’ of this multi-part blog on ReForGer.