Remembering the Real Winnie: The World’s Most Famous Bear Turns 100 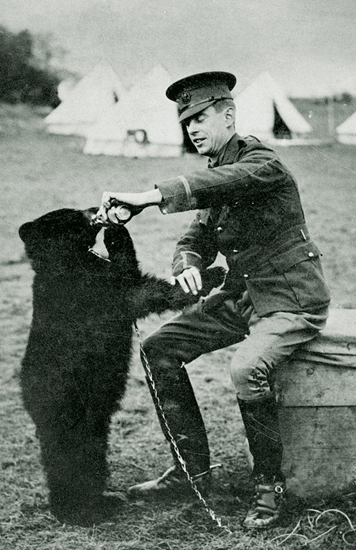 On 24 August 1914 (Captain) Harry Colebourn, a Canadian soldier and veterinarian,  made a pit stop at the train station in White River, Ontario where he bought a bear cub and named her ‘Winnie’ after his hometown of Winnipeg.
In celebration of the 100th anniversary of the inspiration behind Winnie the Pooh, Ryerson University  will host a new exhibition this fall, Remembering the Real Winnie: The World’s Most Famous Bear Turns 100.
The exhibition, hosted by the Ryerson Image Centre and sponsored by Scotiabank, will open to the public on 6 November and appear until 7 December 2014. Numerous historic items from the Colebourn Family Archive will be on view, including photographs and ephemera such as diaries, letters, newspaper clippings and a full veterinary kit from the period, which will be shared with the public for the very first time.