The Seven Years’ War is often referred to as the “First World War,” as it was truly a global conflict. The vast and diverse theaters of war included Africa, South America, India, Europe, the Philippine Islands, and North America. The belligerents included the great nations and states of Europe, the Mughal Empire of India, and the First Nations peoples of North America. In his work, D. Peter MacLeod, the pre-Confederation historian at the Canadian War Museum, focuses on one specific group of First Nations, The Canadian Iroquois and the Seven Years’ War. Historically, this group has been identified as the Seven Nations of Canada, or Seven Fires, and included: the Mohawk, Nipissing and Algonquin of Kanesatake (Oka), the Mohawk of Kahnawake, the Mohawk of Akwesasne/St. Regis, the Huron of Lorette, the Onondaga and Cayuga at Oswegatchie, and the Abenaki of Odanak and Becancour. For the most part, these “praying Indians” of New France had converted to Christianity and lived amongst their French religious benefactors.

The Seven Years’ War, or the French and Indian War as it is also known, was vital in shaping North America, as Britain and France battled for North American hegemony. Each nation rallied its First Nations allies to aid in their imperial struggle.[1] While MacLeod does stress that the Seven Nations of Canada “were fighting to fulfil their obligations as allies to the French,” he is also careful to point out that they were also fighting their own war, “without any particular regard for the…aspirations of their European allies,” in a paradigm he labels “parallel warfare.” (p. x) It is this duality that is the focus and theme of his book first printed in hardcover in 1996 and recently reprinted in paperback. 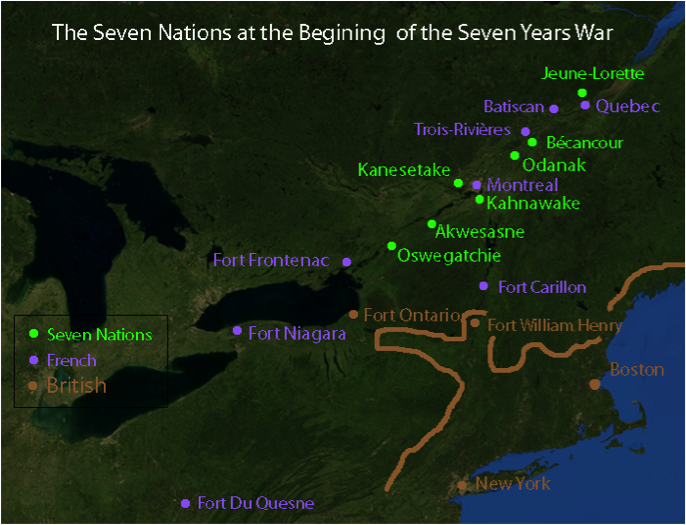 Any author investigating aspects of First Nations history must, if by peer scrutiny alone, delineate approaches to methodology, descriptive nouns, and chronology. MacLeod successfully navigates this principle with an efficient introductory chapter (aside from his use of the outmoded term “Amerindian”).

MacLeod provides an in-depth look at the involvement, decision-making, realities, and results of the participation of the “Canadian Iroquois” in the Seven Years’ War. He uses a vast array of archival sources from the Library and Archives of Canada, as well as a complimentary collection of other printed primary sources, in addition to a sundry range of secondary sources. Curiously, while he thanks Robert S. Allen in the acknowledgments, Allen’s seminal work, His Majesty’s Indian Allies does not appear.[2] MacLeod includes a large number of choice photographs and maps interspersed throughout the text, although the reproduction quality is relatively poor, and re-drawn maps would have been an asset to the book. 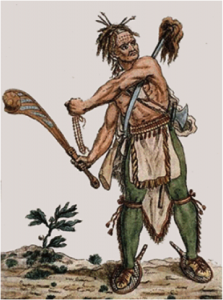 In his work, MacLeod rejuvenates a neglected aspect of Canadian military and cultural history with precision and vigour. Although seemingly trivial, his assertion on the back cover that “the first Oka Crisis occurred” during the war is a sensationalized stretch, and historically misrepresents what actually occurred in Mohawk Territory during the late-1980s and early-1990s. However, MacLeod successfully combines the military, cultural, religious, and economic forces surrounding Canadian Iroquois participation in the Seven Years’ War, and does so admirably. He notes that for the Canadian Iroquois “the war brought both economic dislocation and new economic opportunities,” adding that the war was not fought “just as a military clash between armed opponents, but as a series of cultural confrontations between Amerindian and European [and] the final chapters cover the intricate diplomatic maneuvering of the last year of hostilities…” (pp. ix-x)

The author should also be commended for his thoughtful reflection on the absenteeism of Iroquois women in his work. Within Haudenosaunee (Iroquois Confederacy) culture and society, in addition to the tenets of the Great Law of Peace (essentially the Iroquois Constitution), women (Clan Mothers) were/are extremely influential in socio-economic, military, and political decision-making dialogue and procedure.[3] “Most critically, the importance of clan mothers, who possessed considerable economic and political power within Canadian Iroquois communities, was blithely overlooked by patriarchal European scribes” acknowledges MacLeod. “Those references that do exist show clan mothers meeting in council with their male counterparts to take decisions regarding peace and war and joining in delegations…but only hint at the real influence wielded by these women. A vital component of Canadian Iroquois leadership is thus perforce almost entirely absent from this book.” (p. xiv) There are additional minor contextual omissions in the book, most notably mention of Pontiac’s Rebellion and the ensuing 1763 Royal Proclamation, as well as some slightly misrepresented Iroquoian cultural idiosyncrasies.

Nevertheless, MacLeod has produced a very well researched and well written account of the Canadian Iroquois during the Seven Years’ War. I would recommend this work to any and all audiences interested in military history or First Nations studies. MacLeod concludes that, “From the defunct French alliance, the Seven Nations formally entered into alliance with the British, by ‘renewing and strengthening the old Covenant Chain which before this war subsisted between us, and we in the name of every nation here present assure you that we will hold fast of the same, for ever [sic] hereafter’.” (p. 177) This sovereign alliance with the Canadian Iroquois would serve Britain and Canada well in future domestic and international conflicts throughout the nineteenth and twentieth centuries.

Within the past fifteen years academics and historians have produced a flurry of scholarship detailing Aboriginal military participation in the defence of Canada, and MacLeod’s work favorably adds to the catalogue of this burgeoning field.

The War that Made America is a PBS miniseries about the French and Indian War, which was first aired in January 2006. The series features extensive reenactments of historical events, with on-screen narration provided by Canadian actor Graham Greene.

[1] J.R. Miller, Skyscrapers Hide the Heavens: A History of Indian-White Relations in Canada (Toronto: University of Toronto Press, 2001), 76. J.R. Miller accurately argues that “notions that one nation or another took up arms to advance a commercial or strategical aim of the French or British were erroneous.”

[3] As witnessed by Ellen Gabriel and others during the 1990 Oka Crisis.