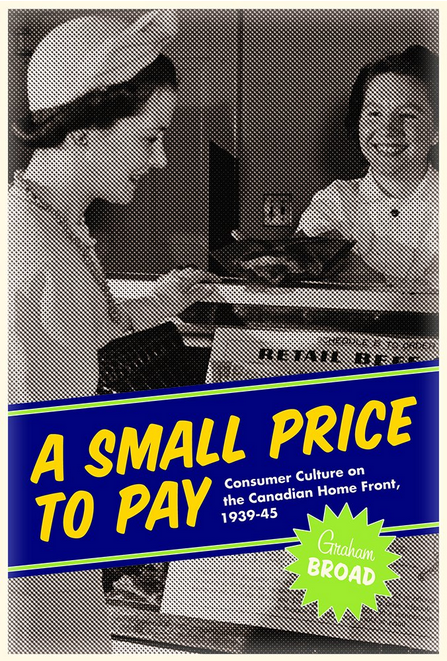 It may be a little trite for me to quote the aphorism that an army travels on its stomach to emphasise the importance of a strong economy to the successful conduct of a war, but it is nonetheless true that far too many studies of warfare have ignored the important necessity of fiscal solvency for military success in order to belabour the always colourful aspects of military prowess.  In Graham Broad’s A Small Price to Pay, he attempts to explore some of this overlooked area as he addresses Canada’s home front experience during the Second World War, particularly in a careful examination of commerce and consumerism under the exigencies of wartime controls.

Broad, an Associate Professor of history at Western University, originally conducted the research which resulted in this publication for his PhD dissertation (UWO 2008), although his bibliography indicates some post-dissertation research. The text of the book is composed of eight chapters (6 are numbered, with an unnumbered chapters as Introduction and Conclusion) and an Appendix entitled “Guns and Butter; Consumer Spending, Inflation, and Price Controls”. The text also includes more than thirty pages of notes, a bibliography, and an index. It is well illustrated with contemporary images, which primarily demonstrate examples of advertising or propaganda. Since the book is published as part of a series titled Studies in Canadian Military History, the final pages include a complete listing of the other titles published under this imprimatur.

The introduction establishes the context in which Broad places his research.  In his own words, it is “… a contribution to the ongoing effort to produce a history of Canadians’ domestic experience in the Second World War” (p. 2), and if we accept it on those terms then it clearly meets its objective—the book contributes to our understanding of the topic and the era. Certainly, there are flaws, some of which will be discussed later in this review, but that should not detract from the fact that Broad has addressed a little considered area and one that calls for further examination to better understand the factors and issues that affected the home front. The book may not be definitive, but then it is questionable whether any historical study is definitive—in fact, fact the only instance that any author has informed me that his work was definitive was when a noted Canadian military historian proclaimed this, adding “… if only because no-one else would ever write on such a boring topic”. Fortunately for researchers, this topic is much more interesting.

After establishing the intent of his monograph in the introduction, Broad launches into his study of Consumer Culture on the home front. His study covers governmental controls, corporate interests and influences through to, curiously enough, a chapter dedicated to the impact of motion pictures on the Canadian viewer.  In his first numbered chapter, Chapter 1, he addresses the importance of the Wartime Prices and Trade Board (WPTB), which he had identified in his introduction as “… the agency most directly involved in consumer affairs” (p. 10). His fulsome description of the importance of this agency touches upon something personal to myself—the volumes of the published decisions of the WPTB rest on a shelf near to my office, and I always knew that if I ever wanted to know more about their activities I could just pop down the hall to look at the assorted volumes. Alas, when examining them to check one of Broad’s references I found to my chagrin that the set is incomplete, requiring more information, more context, and additional data. I mention this because, as with the published decisions of the WPTB, there is something missing from Broad’s account, perhaps something quite important.

Broad emphasises the methods utilised by federal and provincial governments and the private sector to convince Canadians as to the proper path to follow. Whether it was through attempting to persuade consumers to spend less on frivolities and invest in War Bonds, or whether it was to direct the spending dollar in other, more corporatist avenues, in essence much of this book is a study in the methods used in Canada by advertisers (for the Private sector) or by propagandists (usually but no means exclusively the Government). As such this is an extremely valuable addition to our understanding of this issue, perhaps more valuable than Broad himself may have realised. And therein lays a problem.

Broad discusses the activities of the WPTB, not just in their role of controlling prices and helping direct trade, but also in their role of convincing Canadians about the wisdom of a certain measure. For example, in one passage Broad refers generally to a change in “Ottawa’s increasingly strident and even accusatory propaganda …” (p. 74) in reference to the activities of the WPTB, and what he refers to as “other agencies”, as though any other agencies were mere appendages to the propagandist efforts of the WPTB. In another section, he refers to Canadian propaganda published in the United States (to secure American tourist dollars to support the Canadian war effort) without addressing who was ultimately responsible for such a campaign, even though four of his six numbered chapters actually include direct references to advertising in their titles (ranging from “Business as usual; Adworkers and the coming of war” through to “Advertising to win the war and secure the future”). Broad has omitted the overarching influence of the Wartime Information Board and its predecessor, the Bureau of Public Information, the agencies responsible for coordinating the federal government’s propaganda and advertising activities. While the WPTB operated its own information dissemination programme, that an in-depth examination of propaganda in Canada during the Second World War could ignore the Wartime Information Board is, to say the least, surprising.[1] For instance, Broad provides only one reference to John Grierson, the acting General Manager of the Wartime Information Board, albeit to his persona as head of the National Film Board (p. 176).

Nonetheless, Broad has served his audience well.  His coverage of advertising meshes well with the existing limited published sources, and his examination of private sector advertising fills a much-neglected gap in our understanding of the home front. When added to his studies of big ticket purchases (and what that represented in consumer activities and interests), and his fascinating dip into the area of leisure and the Canadian movie-going public (see his numbered chapter 6, “The grim realities of war, as pictured by Hollywood”), this helps complete a good, if incomplete, study in Canadian consumer activities during the Second World War.  And if I use the word incomplete, it is clear, from his conclusion that Broad would agree. The book is incomplete and requires additional research, but as previously mentioned, any good, interesting topic, such as this will always require more research.  This book provides an excellent starting point from which to launch further explorations of the subject area, drawing from the sources Broad has utilised, as well as other, related studies (I note that the bibliography is selective, and does not list, for example, Pauline Jewett’s 1950 PhD Radcliffe dissertation on the WPTB, although the titles listed appear quite apt).  I encourage neophytes and specialists alike interested in the Canadian home front to read this book. It should not be ignored for anyone interested in the topic.

[1] Readers interested in this topic could consult William Robert Young, “Making the Truth Graphic: The Canadian Government’s Home Front Information Structure and Programmes during World War II,” (PhD diss., Vancouver: University of British Columbia, 1978), or the numerous articles published in the 1980s by Young, who is now a retired Parliamentary Librarian.