Ian McKay and Jamie Swift. The Vimy Trap: Or, How We Learned to Stop Worrying and Love the Great War. Toronto: Between the Lines, 2016. Pp. 372. 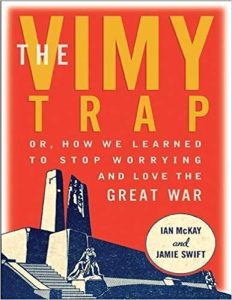 By Geoffrey Hayes, University of Waterloo

This is intended to be a provocative scholarly work, but the clever title, the combative tone, the dearth of original primary research—all suggest that this is a polemic. Polemics can raise useful arguments, and there are some here. But scholarly work engages the existing scholarship, it does not dismiss it, or worse, misread it. To overstate the myth of “Vimyism” with its sinister overtones is the work of polemicists, not serious scholars.

The work’s tone is apparent throughout the book. Its authors seek to dismantle the “Vimy trap,” the narrative that somehow Canada became a nation on the battlefield of Vimy Ridge. But “Vimyism” is even more insidious. We learn that it is an orthodoxy driven by conservative politicians, soldiers, aging hockey coaches, and historians. We learn that Vimyism is dangerous for how “it wants us to return to a day of glorious battle” (p. 11). It is everywhere, from the hats sold by the Royal Canadian Legion to the attempts by “imperialist” city councillors to create a “Valour District” in Kingston, Ontario (p. 13). Vimyism even lurks within the writings of such prominent historians as Jonathan Vance and Tim Cook. If only Canadians understood the “childish irrationalism” of Vimyism (p. 263).

Such highly charged views of the present inform a selective study of the past. A rich historiography on the war’s origins and conduct is reduced to the simple premise that this was the first modern war. Present-day Canadians, McKay and Swift argue, forget that the war was not simply about Canada, and that the 60,000 Canadian dead were just a small fraction of the millions who died. In this they have a point. They then maintain that Canadians now ignore the war’s “moral complexity.” But there is nothing complex about McKay and Swift’s view of the war. The soldiers of a century ago, we are told, were largely “pacificists,” a modern label that describes those who condone war as “a last resort—and then only if undertaken under the auspices of legitimate international institutions (such as the United Nations)” (p. 116). It is unclear just how this label can be applied historically in any meaningful way.

Only through a very selective use of evidence do the authors trace the long road leading to Vimyism. They claim that the often gruesome and remorseful letters and memoirs that First World War soldiers penned represented the true feelings of Canadians. That is impossible to know. The authors maintain that a rich peace movement swept across Canada through the 1930s (p. 129). That is true, but is it also true that, by the end of the 1930s, “Canadians had largely reached a consensus—even if expressed in a myriad of different ways—that the Great War had been an abomination that should never be repeated”? (p. 108) Did such a consensus linger after March 1939 after the Germans invaded Czechoslovakia?

Too often the search for Vimyism after 1945 reveals a dismissive view of warfare that leaves little room for nuance. We learn that the Korean War was “essentially a U.S. war” that did little but profit General Electric (p. 168). Aging war correspondents and school text authors also had little good to say about war in general, or Vimy Ridge in particular. Neither did filmmakers like Donald Brittain or Don Shebib, or the veterans they interviewed in the 1960s. Whether Canadians knew who Brittain or Shebib were is a question the authors do not ask. Even in 1967, the fiftieth anniversary of the great battle, the links between Vimy Ridge and nationhood were not yet tightly forged.

Certainly Pierre Berton helped pave the road to Vimyism in his 1986 book, but even he concluded that Vimy was not worth the cost.[1] The authors admit that Berton’s lofty nationalist narrative has had its critics. Indeed, the authors refer obliquely to a book I co-edited a decade ago that challenged many of Berton’s more extravagant claims. Despite what the authors may believe, there has never been any academic orthodoxy about what Vimy Ridge represented.[2]

Still, two of our profession’s leading practitioners are targeted for contributing to a martial nationalism. The criticism is unfair and ill-conceived, for both Jonathan Vance and Tim Cook are accused of drawing the wrong conclusions from their own work. Vance makes it clear from the outset of Death So Noble (1997) that he is not writing about the war, but rather about the mythology that helped transform the commemorative landscape in Canada after 1918. Still, Swift and McKay condemn Vance for his “muted” criticism of the war (p. 217). They also dismiss Vance’s nuanced study of war memorials, arguing simply that “to go from funerary moments to a bold generalization about one overwhelmingly dominant ‘memory’ seems hazardous” (p. 218). At a stroke, the thousands of memorials Canadians built after the First World War are dismissed, as is the rich literature on war and memory that explores their meanings.

The authors’ attack on Cook’s work is even more curious. Despite the rich and often graphic detail in his two-volume history of the war, the authors maintain that Cook fails to acknowledge how truly unheroic and divisive the war actually was for Canada. In their view, Cook should have written another book that stressed modernism rather than nationalism.

Occasionally McKay and Swift hit a mark. They are right that we need to understand the role of Canadians in the First World War within a wider framework. However, there is nothing very original here. Mark Humphries made that case in the Canadian Historical Review in 2014.[3]

Indeed, there are few original ideas in this book and too many sweeping generalisations and lingering prejudices. It may be fine for two scholars to attack “Vimyism” in a polemic but they cannot dismiss a rich, nuanced literature on the causes, experiences, impact and memory of the First World War and have their work considered serious scholarship.

[3] Mark Osborne Humphries, “Between Commemoration and History: The Historiography of the Canadian Corps and Military Overseas,” Canadian Historical Review 95, no. 3 (September 2014): 384–97.