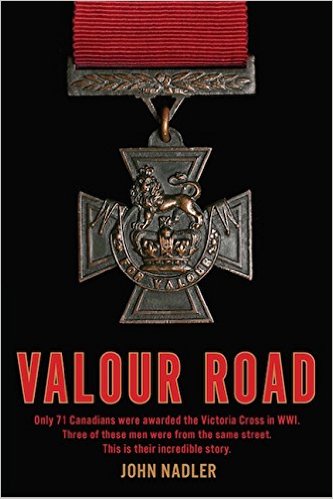 Since its creation in early 1856, fewer than 1,400 soldiers, sailors and aviators have received the Victoria Cross (V.C.), the highest award in British Imperial and, later, Commonwealth nations for the “most conspicuous bravery or some daring or pre-eminent act of valour or self-sacrifice or extreme devotion to duty in the presence of the enemy.”[1] Considering that millions of individuals have been eligible for the V.C. over the last century and a half, its rarity is of the highest order. The odds that three men from the same road in the same small city would receive this coveted decoration during the same conflict are beyond infinitesimal, yet that is exactly what happened. During the First World War, three Canadian infantrymen from Pine Street, later renamed Valour Road, in Winnipeg, Manitoba—Fred Hall (8th Battalion), Leo Clarke (2nd Battalion) and Robert Shankland (43rd Battalion)—each earned the V.C. for their actions at Ypres (on 24 April 1915), Pozières Ridge on the Somme (9 September 1916) and Passchendaele (26 October 1917), respectively.

In Valour Road, journalist and author John Nadler explores the pre-war life and military career of each of these men; he has essentially combined three short biographies into one book. Being careful not to limit himself to a basic description of the events that led to the receipt of each V.C.—such would make for a very short discussion indeed—he also traces each man’s family history and mentions relatives that likewise served in the Canadian Expeditionary Force (CEF). It is fair to say that the book is about families at war, rather than the V.C. to the exclusion of all else. Each of the men, moreover, does not receive equal treatment. The bulk of the book focusses on the experiences of Leo Clarke and his brother, Charles, as Nadler had access to the latter’s unpublished writings; Shankland receives the least amount of attention. As well, Nadler does not examine each man in sequence, finishing with one and then starting with the next, but rather interweaves the experiences of the three soldiers into one single chronology, jumping back and forth between one and the other in order to keep the timeline intact.

To be sure, Valour Road is well-written, flowing and engaging, as one would expect from an accomplished journalist who has contributed to important publications like Time, Maclean’s and the Daily Telegraph. Nadler is also a consummate storyteller, making the book a “page-turner” in places. To his credit, he sets each man’s experiences into the larger story of the war, realizing that these events did not happen in isolation, but rather concurrently with other episodes of historical import. Albeit briefly, he describes the larger battles in which each man earned his coveted decoration. Because he spends a good deal of effort in tracing the military career of each man and putting him in context, it is exceptionally interesting (at least to this reviewer anyway) to observe how their paths crossed with one another, in addition to other eventual V.C.s and well-known figures.

Being about more than just three V.C. actions, the book also sheds light on the homefront and the activities of women thereon. In so doing, for example, Nadler recounts how Mary Hall, Fred’s grieving mother, used one of her Imperial Order Daughters of the Empire connections, the wife of Major-General Sam Steele, to have her wounded son, Harry, returned to Canada in late 1915 (pp. 209-218). Because some effort is devoted to examining other men from Pine Street who served overseas but did not earn the V.C., the book offers an interesting look at how the war affected the people of a single street in Canada. One gets the sense that there were many such Pine Streets throughout the country, with so many neighbours enlisting to serve the Empire and its cause. Of course, the focus of the book lies squarely on matters military, and Nadler offers some insight into the “live and let live” phenomenon, leadership, combat stress and the “mind of the soldier.”

Valour Road will appeal most to a general, non-specialist audience. Of concern for professional academics is Nadler’s depth and breadth of research, which is, admittedly, somewhat lacking. Owing to his residence in Europe, his investigation into the story of the three V.C.s was partially completed online, with proxies undertaking some, but not all, of the work in Canada. With that being said, however, and much to his credit, he did gain access to the various unpublished memoirs of Charles Clarke, something that benefitted the book immensely and provided considerable insight into the experiences of the Clarke brothers; so central are these documents that one wonders if the book could even have been written without them! The fact that Nadler did not cite the major repositories where germane material may possibly be held—for instance, the City of Winnipeg Archives, the Archives of Manitoba, the Canadian War Museum (that now owns the three V.C.s) and Library and Archives Canada (beyond his online sources)—is problematic for it suggests that the research is incomplete. Is there nothing more to the story of these three men beyond that which can be found online and in secondary sources? Likewise, he has omitted some major works from his bibliography, such as Tim Cook’s No Place to Run about gas warfare, Andrew Iarocci’s Shoestring Soldiers about the early experiences of the 1st Canadian Infantry Division, and Nathan Greenfield’s Baptism of Fire about 2nd Ypres, all of which would have helped his discussion of Canada’s first major engagement of the war in April 1915 as it relates to Fred Hall. While comprehensiveness may not necessarily be required for a popular history, and it must be borne in mind that Nadler is a journalist, it most definitely is a prerequisite for anything that purports to be a thorough account of a topic.

Nadler’s book is also more about “valour” than it is about “road.” Surprisingly, Valour Road itself is barely mentioned at all, although the history of its predecessor is detailed at length at the outset. One cannot therefore escape the feeling that he presents only half of the story—while the deeds that earned the three men their V.C.s are well and truly covered, the post-First World War history of Pine Street is hardly discussed. Perhaps owing to the fact that some of his research was completed from a distance, he does not investigate such questions as: the discussions and decision to rename the route at the municipal level; the reaction of the general public to the change; how the newspapers covered the story; if this unlikely coincidence of three V.C.s on a single road received attention elsewhere in Canada or the Empire; and so forth. Additionally, how did a neighbourhood memorial come to be erected in 1925 when Winnipeg itself struggled for a decade, amidst apathy, lack of funding, controversy and racial prejudice, to establish a suitable memorial to the city’s war dead?[2] Such cultural omissions may, in the end, make some readers feel unfulfilled. An excellent opportunity to investigate the developing memory of the Great War in its immediate aftermath, using Valour Road as the vehicle to accomplish this, was sadly missed. All of this criticism could have been avoided, perchance, by selecting a less misleading title.

Unfortunately, there are other problems too. Maps of Ypres, the Somme and Passchendaele, something that would have made situating the actions of the three men much easier, have not been included. In their absence, commonly-referred to places, like the “D1-4 trenches” and “Locality C”, become relatively meaningless. The V.C. citations as taken from the London Gazette for each of Hall, Clarke and Shankland have not been included either. It is not unreasonable to expect their reproduction in a book of this sort, even in the endnotes, for the sake of interest and completeness. Nadler’s use of language is also wanting. The book reveals that he does not possess a specialist’s understanding of the nuances of military terminology contemporary to the war, and given his journalistic background, this can partially be forgiven. His mislabelling of a few Canadian Militia regiments and CEF battalions, in addition to his misuse of specific terms, makes the narrative awkward at times to read. “Officer,” for example, is not a proper military rank like lieutenant and major are, nor is “officer commanding raid.” His use of popular language only compounds the problem; phrases such as “commando operation” and “body count” seem quite out of place in a book about Canada and the First World War. And finally, a few factual errors and questionable statements are present too, which, when combined with the above, deprive the book of some of its credibility.

Considered cover to cover, however, John Nadler’s Valour Road reinforces the notion of “every man his story.” There were some 619,000 attestations in the CEF during the First World War, and it follows that there was likewise 619,000 individual stories, a fact that is sometimes obscured by the sheer size of the engaged armies and the horrendous casualties that they suffered on both the Western Front and elsewhere. Nadler has written an interesting account of the history of an important three, a trio, it may be heretical to say, that would be otherwise unremarkable were it not for the fact that each earned the Victoria Cross and just so happened to live on the same rough-hewn street in Winnipeg.

[2] An interesting account of the decade-long struggle to commemorate Winnipeg’s war dead, which at times bordered on the laughable and improbable, can be found in James Henry Gray, The Roar of the Twenties (Toronto: Macmillan, 1975), 253-265. Caution must be used, however, for the book contains no citations and is more in the style of a memoir and popular history than a proper academic treatment of the 1920s in the Canadian West. Nevertheless, it reveals the mood in Winnipeg concurrent to the evolving history of Pine Street / Valour Road.