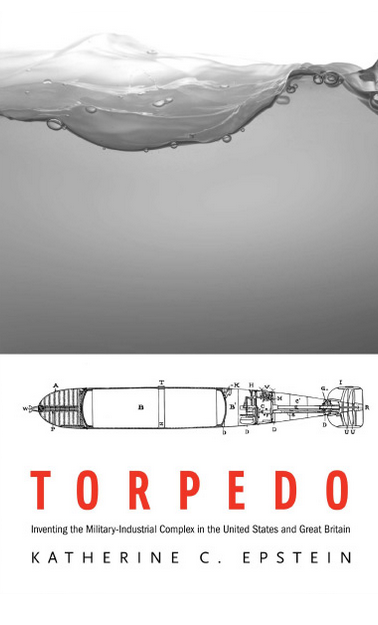 By Russell Isinger, University of Saskatchewan

When American Civil War Admiral David Farragut famously ordered his warships to “Damn the torpedoes” and proceed full speed ahead at the Battle of Mobile Bay, he was using naval parlance that had long referred to floating underwater mines.  Two years later, in 1866, Englishman Robert Whitehead appropriated that term for his new invention, the self-propelled torpedo, a weapon which would revolutionize naval warfare.  In her painstakingly researched and immensely detailed book Torpedo: Inventing the Military-Industrial Complex in the United States and Great Britain, Katherine Epstein delivers a fascinating and multidisciplinary overview of how the torpedo evolved and was adopted into the United States Navy (USN) and Royal Navy (RN) from the late nineteenth century up to start of the First World War.[1]  Epstein’s claim is that the torpedo’s origin story was a preview of how public-private industrial relationships involving sophisticated weapons systems would subsequently be structured.

The book is divided into six chapters, with an introduction and a conclusion. The chapters examine the comparative interactions of agencies of the USN and RN with torpedo manufacturers (sometimes the same companies operating in both countries) as they struggled to come to terms with a new technology that had the potential to outrange the gunnery of their battleships.  The goal of the two navies was the same—to gain and maintain advantage over their naval competitors—but they had different approaches, and experienced different outcomes.  The RN, the world’s preeminent naval power, possessed a superior research & development (R&D) infrastructure and was confident enough in its naval prowess to deploy torpedo technology through an incremental, cautious, and thoughtful process (though Epstein notes this approach should not to be deemed conservative), while at the same time carefully considering the torpedo’s impact on naval tactics and strategy.  In contrast, the USN, an upstart naval power, lacked such R&D infrastructure, and instead chose to gamble on radical (and riskier) technological breakthroughs hoping for a shortcut to advantage; the USN also was less focused on discussions of tactics and strategy. The result was a process that paid off for the RN in terms of cost-effectiveness, performance, and naval doctrine (though it was not without its problems), but one which can only be described as trouble prone for the USN.

Epstein anchors her book around a concept developed in William McNeill’s classic, The Pursuit of Power—“command technology.”[2]  Essentially, the torpedo was among the first weapons systems that were so complex that the private sector could no longer solely afford the R&D costs associated with them.  As a result, militaries could no longer expect to purchase off-the-shelf armaments from companies that assumed the entire R&D risk; they would have to directly finance cutting edge design while also sharing the expertise of technically skilled military personnel with these companies. Of course, by entering into such commercial partnerships, militaries could now directly influence the design of these advanced weapons.  But, as Epstein writes, command technology carried unexpected consequences:

Essentially, the line where private ended and public began became blurred.  The implications of this are outlined in one of the more intriguing explications in Epstein’s work, where torpedo R&D intersected with intellectual property rights and patent law (as well as national security law).  Poor management of the relationship and the contracts between the USN, their own engineers, and their torpedo manufacturers resulted in two high profile patent infringement cases, both of which went all the way to the US Supreme Court.  Both cases ended in favour of the US government, despite the weakness of the government cases.  Epstein does an excellent job guiding the reader through an admittedly arcane subject, both on the technical aspects of the ownership of the torpedo patents, the ins and outs of the contracts and the legal environment, and the implications for future state-society relations.  This situation, it should be noted, proved to be far more problematic in the US than in Britain, where patents could be deemed secret and where skilled RN personnel could be rewarded (both monetarily and through promotion) for their innovations, thereby avoiding their departure for more lucrative careers with defence contractors.

In President Dwight D. Eisenhower’s 17 January 1961 farewell speech, he advised the United States to guard against the “unwarranted influence, whether sought or unsought, of the military-industrial complex [MIC]” (p. 1)—an iron triangle of mutually supporting and beneficial relationships between the defence industrial base, the armed forces and government, and academia that could distort peacetime public policy choices.[3]  Ever since, the MIC has been conceptualized in terms of the post-Second World War period, and Epstein’s book does a great service by continuing to trace the historiography of the MIC to the nineteenth century.

But are the Bliss Company and the USN’s Torpedo Station, and the Whitehead Company and the RN’s Torpedo Factory really the progenitors of General Dynamics and the Defense Advanced Research Projects Agency?  Certainly some key aspects of the MIC are present, but just as many are missing in these formative years: the companies were sometimes reluctant, if not outright hostile, partners with the military (and vice-versa), as opposed to being in a symbiotic relationship; big research in the form of military-funded university research laboratories was nascent; legislators in Congress and Parliament were mostly looking to cut defence budgets, not expand them.  One is left with the impression they are meant to draw their own logical conclusions about the emergence of the MIC at the end of this book, but it is easy to lose one’s way regarding Epstein’s thesis amidst the immense historical and technical detail presented about the torpedo itself.  A work of such original scholarship would have benefitted from a more convincing conclusion, but this does not diminish the overall value of the book.

In summary, this book is a great read and it is highly recommended.  Epstein combines a refreshingly original approach with an interesting topic on which she skillfully brings to bear many disciplinary perspectives.  By the end of the book the reader not only has an in-depth knowledge of the early history of the torpedo in the US and Britain, but also a thorough understanding of the administration and comparative tactics and strategy of both a weak naval power aspiring to become strong and a strong naval power determined to stay that way in the face of a game changing weapons system, of nineteenth century business history and the origins of the legal system’s intellectual property and patent law protection, and of the theoretical and evolutionary underpinnings of the MIC.  As an added bonus, given the volume of clearly and carefully explained technical and scientific detail in the book, supported by contemporary blueprints, one could also likely build their own torpedo.[4]

[3] On the speech see James Ledbetter, Unwarranted Influence: Dwight D. Eisenhower and the military-industrial complex (New Haven: Yale University Press, 2011).  A comprehensive overview of the concept of the MIC can be gained from The Military-Industrial Complex and American Society, ed. Sterling Michael Pavlec (Santa Barbara: ABC-CLIO, 2010).