Review of Mark Boulton’s Failing Our Veterans: The G.I. Bill and the Vietnam Generation by Alyssa Cundy 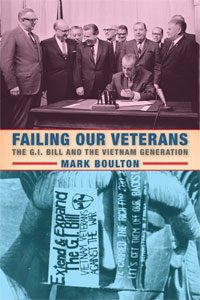 On 26 November 1974, U.S. President Gerald Ford informed the House of Representatives of his decision to veto the proposed expansion of bill number 12628, known informally as the new Cold War G.I. Bill. Citing the need to exercise “budgetary constraint… if we are to bring inflation under control,” Ford was the first American president to veto federal education funds for soldiers returning from active duty. So unpopular was Ford’s decision, Congress overrode the president a week later in a landmark vote in favour of improving Korean War-era and Vietnam veterans’ education benefits.[1] In Failing Our Veterans: The G.I. Bill and the Vietnam Generation, Mark Boulton traces the turbulent history of veterans’ legislation in the United States from the early days of the Revolutionary War to the betrayal felt by many Vietnam veterans following their return home from Southeast Asia. Ultimately, Boulton has crafted a thoughtful and well-researched account that explores the relationship between civic duty and military service; specifically, what it means to fight for Uncle Sam and then reacclimate to civilian life.

In Chapter 1, the author identifies several factors that have traditionally informed the debate over veterans’ benefits. Money—not surprisingly—was always the first consideration for policymakers. What departments or social services will suffer as a result of extending a helping hand to one segment of the population? The fear of draining government coffers has kept several presidents from championing the cause of veterans’ readjustment. Similar to Ford, Lyndon B. Johnson (LBJ) is an example of a Commander-in-Chief who prioritized fiscal conservatism and domestic politics over returning soldiers’ needs. Keen to promote the merits of his Great Society, LBJ was reluctant to earmark federal funds for Vietnam vets that could be used to combat poverty and racial injustice on the home front (pp. 15, 70-71).[2]

Equally important to the U.S. government were the dangers associated with incentivising the business of soldiering. In other words, what happens when a society rewards soldiers for simply performing their duty? Given this thin line between citizenship and military service, were some patriots more deserving than others? In 1776, as an inducement to join ranks against the British, the Thirteen Colonies ensured that wounded soldiers received half-pay for life. Then, four years later following a string of military victories, the Continental Congress granted all soldiers a one-time payment for service, while permitting widows and orphans of Revolutionary soldiers fifty per cent of their loved ones’ pay for the next seven years. However, this practice did not sit well with the third President of the United States, Thomas Jefferson, who warned against the “potentially corrosive effect” of paying out men-at-arms (p. 21).

Another consideration was the power of veterans’ organisations to lobby effectively on behalf of soldiers. This proved especially true in the wake of Franklin Delano Roosevelt signing the 1944 G.I. Bill, which eased Second World War veterans’ readjustment by providing low-interest mortgage and business loans, as well as living expenses and tuition payments (pp. 32-34). This last incentive remained a thorn in the side of Vietnam-era veterans. In comparison to the generous benefits bestowed on the “Greatest Generation,” the 1966 Cold War G.I. Bill fell short of the mark when it came to post-secondary education. Indeed, veterans found that the one hundred dollars they were given each month covered only a small portion of the funds needed to attend private colleges or top state universities. To avoid mounting debt, many veterans opted to study at cheaper, less prestigious schools, worked full-time in addition to studying, or dropped out altogether. This was the dilemma faced by Oklahoma native Dennis Rainwater, who served a tour of duty in Vietnam as a first lieutenant and returned home wanting to continue his education. Writing to President Richard Nixon in 1969, Rainwater let it be known that he did not have any ill will toward the government or even his fellow Americans who protested the war on college campuses. However, he could not help but feel that coupled with such little fanfare, “[and] at a time when you are trying to get support for your Vietnam policy,” more ought to be done to ease the transition back into civilian life (pp. 96, 100).

Building on the narrative advanced by Murray Polner in No Victory Parades: The Return of the Vietnam Veteran (1970) and, most recently, Patrick Hagopian’s wonderful book, The Vietnam War in American Memory (2009), Failing Our Veterans makes excellent use of private papers, presidential archives, and veterans’ interviews to highlight the long and fractious history of veterans’ rights in the United States. Nowhere is this more apparent than in Boulton’s discussion of larger-than-life Texas congressman Olin E. Teague. Known by the nickname “Tiger” to both his friends and rivals, Teague was a decorated veteran of the Second World War and served for seventeen years as chairman of the House Committee on Veterans Affairs. Cut from the same Southern Democrat cloth as LBJ, throughout his tenure on the Veterans Affairs Committee, Teague often had more in common with Nixon and the Republicans when it came to doling out veterans’ benefits. Time and again, “Tiger” jumped at the chance to filibuster bills that would provide Cold War-era veterans with similar benefits along the lines of the 1944 G.I. Bill.

At times, Boulton’s emphasis on Teague’s career—in particular his rivalry with Texas senator Ralph Yarborough—overwhelms the book’s through-line. It is also surprising that there is no mention of George W. Bush’s 2008 post-9/11 G.I. Bill, if only to show how veterans’ benefits have remained a topic of contention for U.S. legislators in the intervening decades since the Vietnam War. Nevertheless, Failing Our Veterans is highly recommended for scholars of modern American history and anyone looking to gain a deeper understanding of veterans’ affairs.

[2] A fact that made Lyndon Johnson’s decision to sign the 1966 G.I. Bill all the more significant.  With the passage of this legislation, veterans could now count on the federal government for some form of financial compensation whether they saw active duty or served in peacetime, which had not been the case for Korean War vets in 1952-1953.