As Canadians we have a morbid fascination with our failures. We prefer to trumpet our setbacks rather than celebrate our successes. Maybe this is preferable to an overly jingoistic approach to our history, but at times it leads to a skewed representation of the past. In the field of Canadian military history, no disaster looms larger than Dieppe and it has commanded our attention since the last boats left the French shore 71 years ago. The first chronicler was the Canadian army official historian, C.P. Stacey, who compiled and wrote 17 reports during and shortly after the war which attempted to understand the reasons the raid had failed. Since then countless newspaper and magazine articles have appeared, participants have recalled their roles, historians and others have attempted to understand (and justify) the mission, and numerous documentaries have told and retold the now-familiar story. 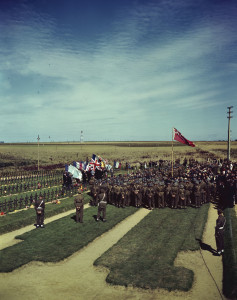 The most recent book on the raid is Tragedy at Dieppe by Mark Zuehlke which provides a well written narrative of the planning and conduct of the raid. This is the tenth book in his Canadian Battle Series which surveys the major Canadian campaigns of the Second World War – Sicily and Italy, Normandy and Northwest Europe. Zuehlke’s books provide a rich tapestry on the soldier’s experience in war and the role played by the Canadian army and his book on Dieppe is no different. This book has a great deal to offer general readers with little to no knowledge of the Dieppe Raid. It provides a solid overview of the genesis and planning of the raid, it explores the intensive training Canadian troops were put through prior to the raid and it documents the carnage and heroism on the five beaches where Canadian and British troops fought and died on 19 August 1942. Zuehlke is at his best when he explores the personal side of the raid. Men such as the Canadian commander, Major-General “Ham” Roberts, and his chief of staff, Lieutenant-Colonel “Church” Mann, become more than simple names in a book. Roberts was “tall, broad-shouldered, heavily muscled” and looked “every bit the soldier…a dedicated professional.” (p.64) Though considered “a great soldier,” Zuehlke observed that as an artillery officer Roberts had no infantry experience and was “consequently lacking in essential knowledge.” (p.66) Mann, a “tall and sparsely built” officer also lacked experience but is described as “a quick-witted, versatile staff officer, an artist in operational planning whose briefings were models of articulate planning.” (p.67)

Zuehlke is similarly descriptive in his description of the carnage on the beaches. He recounts how “Twenty-seven-year-old Lieutenant William Wedd’s platoon had been shredded to about ten men by fire from a pillbox” and Wedd himself “used a bangalore torpedo to blow and hole in the wire and led the platoon in a charge straight into the teeth of the German fire” where he personally killed the Germans in a pillbox before falling dead (p.263). Descriptions like this make the book an interesting read.

If you are looking to learn something new about Dieppe than this book is not for you. Zuehlke ably retells the story of Dieppe but provides nothing that cannot be found in the rich historiography of Canada’s involvement of the Raid. In the preface to his book, Zuehlke raises a number of important questions surrounding the campaign but the body of his book is straight narrative and it is only in his short epilogue that he briefly returns to an analysis of the raid. Any serious study of the Dieppe raid will start with Stacey’s chapters in volume 1 of the official history of the Canadian Army in the Second World War, Six Years of War (1955), which remain an excellent introduction to the topic, and T. Murray Hunter’s short monograph Canada at Dieppe (1982) offers a succinct and balanced narrative of the raid. Terence Robertson’s Dieppe: The Shame and the Glory (1962) is another traditional account which offers a good balance between the planning of the raid and its execution. 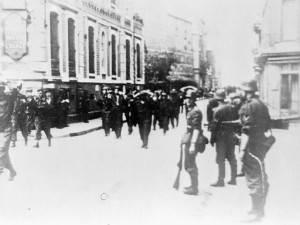 Controversy and Dieppe have gone hand-in-hand and there are a number of books that approach this from different angles. Brian Loring Villa contends that Lord Louis Mountbatten ordered the raid to take place without any reference to higher command (Churchill). This is a difficult case to prove and is based on the non-existence of a direct order or telegram from Churchill authorising the remounting of Operation Jubilee. Villa’s argument does not convince many historians, but his painstaking analysis of the planning for the raid remains unsurpassed. Brereton Greenhous has written a short book on Dieppe which presents an uncompromisingly critical interpretation of the raid. Greenhous argues that the plans for Rutter and Jubilee were fatally flawed, inexperienced Canadian troops did not fight well, and no worthwhile lessons were learned. He concludes that only gross German incompetence could have resulted in the success of the Dieppe operation.

Two other essential books on the raid are Denis and Shelagh Whitaker’s Dieppe: Tragedy to Triumph (1992) and Norman Franks, The Greatest Air Battle (1992). Denis Whitaker was a captain in the Royal Hamilton Light Infantry in 1942. He landed on the main beach at Dieppe, fought his way through the casino and into the town and managed to find his way back to England unwounded. His book, a collaboration with his wife, documents this experience but also offers a balanced appraisal of the raid which seeks to understand and justify the cost. Particular care is given to linking the failures at Dieppe to the successes at D-Day. Franks, an accomplished air historian, provides a narrative look at the air battle over Dieppe. It is unique as the only monograph to focus on the air to air battles over Dieppe.

One might conclude from reading Zuehlke’s book that there is nothing new to learning about the Dieppe Raid but nothing could be further from the truth. The Autumn 2012 issue of Canadian Military History focussed on Dieppe and presented a number of innovative, cutting-edge interpretations of the Raid. David Hall (King’s College London) examined the German perspective of the raid and showed how its outcome was used for propaganda purposes and how it influenced the German’s high command’s perception of their success in the war. Ross Mahoney (doctoral candidate, University of Birmingham) contextualised the air battle of Dieppe and emphasised how it grew out of the existing RAF doctrine for amphibious air support operations. Béatrice Richard (Collège militaire royal de Saint Jean) examined how the Dieppe raid was viewed in Quebec and fed into the myth that soldiers from that province had suffered a disproportionate number of casualties. These articles have little in common other than a focus on Dieppe but they show how an examination of various military, political, strategic and social issues can enrich our understanding of Canada and the Second World War. 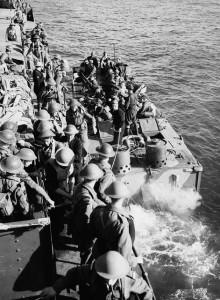 Cameron Highlanders of Canada disembark just before the raid

Another new area of study was revealed last fall in the documentary “Dieppe Uncovered” which premiered on History Television on the 70th anniversary of the raid. Historian David O’Keefe argues that the real reason behind the Dieppe raid was to provide cover for an intelligence mission or “pinch operation” to get German naval code books related to the new German four-rotor Enigma machine. The “Ultra” secret – the Allied codename for intelligence gathered from reading Enigma traffic – was closely held by the Allies and not officially acknowledged until the early 1970s. It is not surprising that the role of a secret unit tasked with capturing German intelligence material was also kept out of the history books. O’Keefe is one of the first historians to shed light on the role of a special commando outfit, known as 30 Assault Unit, at Dieppe. The documentary examines the role of Ian Fleming, the legendary author of the James Bond novels, in coordinating the actions of this commando force at Dieppe. Like the operation in general, 30 Assault Unit did not succeed in its mission, but the revelation of this mission by O’Keefe greatly enriches our understanding of the raid and shows that new secrets can be revealed even 70 years later.

There are a number of minor problems with Zuehlke’s book which detract the reader. The 25-pounder guns of Roberts’ 1st Field Regiment, RCA are identified as “24-pounders” (p.65) and Air Vice-Marshal Trafford Leigh-Mallory, the air commander for the operation, is mid-identified as “Vice Air-Marshal Trafford.” (p.185). Another problem with the book is the nature of the index which appears to have been compiled using a key word search rather than by an informed eye. For example, if you are looking to read about the actions of the Royal Regiment of Canada on Blue Beach you will find no entry in the index under the regiment, but rather, you need to search for “Blue Beach.” This error is repeated for numerous topics.

New material continues to be published. A forthcoming issue of Canadian Military History will feature an article by Caroline D’Amours, a doctoral candidate at the University of Ottawa, on the preparation and training of the Fusiliers Mont-Royal for the Dieppe operation. Without too much trouble I could detail a list of a dozen topics related to the operation that require further study. Zuehlke’s book is a commendable addition to our understanding of Dieppe and is an ideal introduction to the topic but there is still much to learn about one of Canada’s great tragedies.