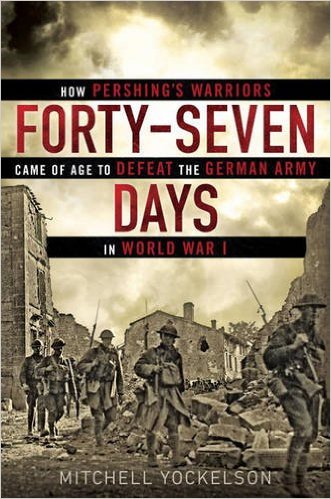 With the upcoming centennial memorialisation of America’s involvement in the First World War, it is no surprise that an increased number of monographs have made their way onto the market. For some time, Americans have seen only a handful of publications reach the bookshelves that pertain to the First World War. However, the one hundredth anniversary of one of the great conflagrations in world history is beginning to make a mark on personal and public libraries. Mitchell Yockelson’s new monograph, Forty-Seven Days: How Pershing’s Warriors Came of Age to Defeat the German Army in World War I, helps introduce the story of the American Doughboys and their commanding officers; most notably General John J. Pershing.

Twenty years ago, works such as The AEF and Coalition Warmaking by David Trask, and Pershing and His Generals by James J. Cooke, offered a unique glimpse into the inner workings of the United States forces.[1] Defined in these works were key topics such as leadership, training, early combat effectiveness, and logistics. Later monographs such as Mark Grotelueschen’s excellent book titled The AEF Way of War and Doughboys on the Great War by Edward A. Gutiérrez, assisted the reader with understanding the real experiences of combat soldiers.[2] Forty-Seven Days combines previous insights from books such as these and permits students of the First World War to gain a broader picture of the war from the upper echelons of command to the rank and file.

When the United States entered the war in April 1917, its meager army numbered just over 100,000 men.  To meet the demands of a global war, not only would a massive military force have to be built, but a man had to be chosen who would lead the troops to certain victory. In May 1917, Secretary of War Newton D. Baker chose Pershing to lead what would be known as the American Expeditionary Force (AEF).

What Yockelson intends to do with this book is introduce the reader to Pershing the man and the soldier, and how previous experiences aided him and his troops in the fight on the Western Front. After all, Pershing had faced many different situations and cultures throughout his early career. As the author points out in the first chapter, “Pershing firmly believed that educating oneself about other cultures was an essential part of leadership, and he remained dedicated to this approach for the rest of his Army service” (p. 20). Because of this, Pershing had a unique ability to work with many different types of soldiers and civilians, including African American cavalrymen on the frontier and during the Spanish-American War, Moro peoples during the Philippine Insurrection, and officers who called him derogatory names due to being so close to his black troopers (“Black Jack” Pershing is an edited version of a much uglier nickname). Pershing figured out a way to work through tough situations to get the job done.

The author’s easily readable style permits readers to take the understanding of Pershing the man from the first chapter to Chapter 2 which tells the story of the building of the AEF’s First Army. What is most important to remember is that the commanding general wanted his Doughboys to remain an independent fighting force. When “Black Jack” met with French officers, he reinforced the idea of an autonomous army. As Yockelson points out, this was met with some trepidation by foreign officers, but Pershing insisted on it. The AEF would have to prove itself on the battlefield to show its worth.

The test that showcased the value of the AEF was St. Mihiel, which the author covers in Chapter 3. Yockelson takes the reader through the planning stages, the organizational issues, and the build-up to America’s first trial by fire on the Western Front. An asset to reading this particular book is that it not only illustrates the power struggle at the top of the rank structure, but also the experiences of junior officers and some of the enlisted personnel. Many of the officers who would become household names during the Second World War, proved their value on the battlefields of the First World War. George S. Patton, Jr., Douglas MacArthur, George C. Marshall, and others learned much while under the command of Pershing. However, their experiences at St. Mihiel paled in comparison to what was to come a short time later.

To this day, the Meuse-Argonne Offensive is the largest operation in U.S. Army history, so it is no surprise that the bulk of the remaining chapters of the book cover this highly important campaign. Chapter 4 focuses on how a young colonel named George C. Marshall, then First Army’s logistical officer, formulated a plan to manoeuvre all of the Doughboys into a position where they could be the most effective. The sheer magnitude of the operation comes into view when Yockelson writes, “Marshall first had to move 500,000 troops, 2,000 guns, and 900,000 tons of ammunition and supplies fifty miles into position for the attack on September 26,” (p. 90). There is little doubt that during his time under Pershing’s command, Marshall learned valuable lessons that would come into play less than three decades later.

The offensive begins in Chapter 5, which is fittingly entitled, “On with the Battle.” As the artillery bombardment progresses, the time for the infantrymen to go “over the top” gets nearer and nearer. Those soldiers, their uniforms, equipment, and weaponry are discussed in this section. This allows readers to visualise exactly what the American soldier looked like at that time. The one weakness of this book is that the descriptions of the soldiers’ uniforms and equipment does not come along until the final campaign. It may have been more useful to have this picture of the soldiers painted earlier in the work. However, the author does a good job of explaining the intricacies of the Doughboy’s “kit.”

As the campaign moves forward through Chapter 6, entitled “Advance”, readers can see the overwhelming power of the offensive. The following chapter, “Behind the Lines”, showcases the German POWs and their treatment by the AEF. We begin to see the use of interrogation tactics, and the information received from varying methods, as an asset to the continuing struggle on the battlefield.

The lull in the fighting, covered in Chapter 8, prepares the reader for the thrust of the AEF into the Argonne Forest in Chapter 9, “Fighting in the Argonne.” Here, we are introduced to Major Charles Whittlesey, who would become famous as the commander of the “Lost Battalion.” Their initial movements are covered in this chapter, but do not end until a couple chapters later, when we are also reminded of the heroism of Sergeant Alvin York.

The book does not end with the Armistice on 11 November, which is a fantastic asset. As Yockelson closes out his monograph, he takes the time to teach readers about the historical memory of the AEF. From 12 November 1918, to the dedication of the Tomb of the Unknown Soldier in 1921, to Marshall returning to the Argonne in 1944, we are taken on a journey of remembrance of the sacrifices of the Doughboys on the front. Biographical information on each major character within the book ends the monograph. With that final touch, readers can understand what happened to each soldier after the guns went silent.

Yockelson’s book is a great asset to any First World War library. His writing style is clear, the book flows very well from one chapter to the next, and the level of research is apparent. Readers learn that Pershing was a unique figure; in the right place, at the right time. His leadership style, along with talented supporting officers, permitted the AEF to remain an independent fighting force which could pack a hard punch on the battlefield.