Review of Rachel Duffett’s The Stomach for Fighting: Food and the Soldiers of the Great War by Matthew Walthert

Rachel Duffett, The Stomach for Fighting: Food and the Soldiers of the Great War (Manchester: Manchester University Press, 2012). 269 pages.

Anyone who has studied the First World War has read about the food. Complaints about bully beef, alternate uses for rock-hard biscuits, and generals fattening themselves behind the lines while the troops suffered from ration shortages at the front are common features of many Great War histories. Despite these oft-repeated stories, the enlisted man’s relationship with his food (official ration and otherwise) has not been the subject of a scholarly, book-length study, until now. Using the diaries and memoirs of the rank-and-file soldiers of the British Expeditionary Force (BEF), Rachel Duffett has put together a detailed review of ordinary soldiers’ experiences with food on the Western Front.

In The Stomach for Fighting, Duffett exposes truisms –  such as the enlisted men having better diets in the military than in pre-war, working-class England – which have crept out of sometimes self-congratulatory official statistics and histories, or overly-optimistic army ration scales. In The Last Great War, Adrian Gregory explored some of these clichés, particularly as they related to the British home front. Here, Duffett turns to the actual soldiers, whose caloric needs were being met, but were often less-than-thrilled with their food. Using a variety of published and unpublished letters, diaries and memoirs, she breaks new ground in looking not only at what (and how much) enlisted men ate, but also their reactions to their food. 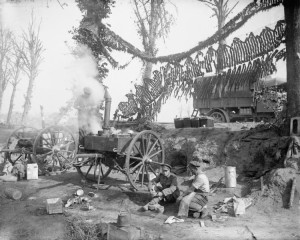 Cooks of the King’s Own Yorkshire Light Infantry prepare a meal for their battalion on field cookers near Ypres.

Unfortunately, as Duffett notes, the vast majority of enlisted men in the First World War had very little formal education. Therefore, their letters and diaries, if they kept them at all, are typically crude and lacking in descriptive detail. This dearth of information necessarily leads to generalizations about the experiences of millions of soldiers on the basis of a small group of recorded recollections. Barbara Tuchman once wrote that she “tried to avoid spontaneous attribution or the ‘he must have’ style of historical writing.”[1] In some cases, it was unavoidable here.

One of Duffett’s most valuable contributions is her observation that, even in situations where men might have been satisfied with the quantity and quality of their food, they could not truly enjoy it. She notes that rations’ “calorific value rarely compensated for the surroundings in which they were consumed” (p. 179), with the omnipresent spectre and smell of death. Duffett makes it clear that the psychological underpinnings of soldiers’ complaints often had little to do with the physiological properties of the food they were eating. 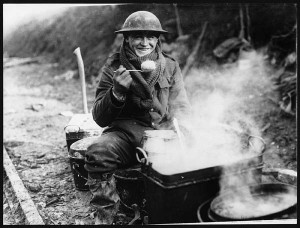 A welcome treat: A British soldier on the Western Front enjoying a hot meal.

Still, at some points in the book, one gets the sense that Duffett is being too critical of the quality (and quantity) of the rations that soldiers received. It must be remembered that the BEF met its soldiers’ most basic nutritional needs: no one starved. Soldiers may not have always enjoyed what they were fed, particularly in the front lines, but they obviously ate enough of it to stay alive and stay in the fight. Complaints about army food, especially while on campaign, are ubiquitous, covering wars across the centuries and around the world. This is to be expected: war displaces people from their comfort zones, and an army on the march in a foreign country cannot always be expected to provide familiar food for its soldiers. As former US Navy SEAL Mark Owen noted in No Easy Day, “No one joins the military for the food.”[2] Even with modern innovations in technology and transportation, food is a familiar subject of complaint in today’s armies. In my brief military experience training as a Canadian infantry officer, I spent short amounts of time living on field rations. They are not terrible, but I cannot say that anyone really enjoyed them (although lunch does come with a full-size, brand-name chocolate bar). Even a week-long field exercise necessitated a trip to the supermarket to stock up on more edible alternatives. Obviously, soldiers in the Great War did not have easy access to Loblaws or Wal-Mart, and thus had a more dependant relationship with their rations. 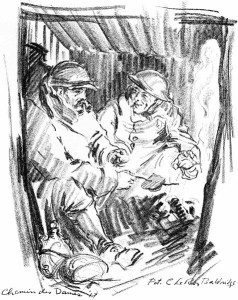 A 1917 sketch of two British soldiers cooking their rations and warming their hands over a small fire in their dugout.

Duffett’s work challenges Richard Holmes’s assertion that “the preparation and consumption of food also gave a texture to long days and busy nights, provided those little mental inducements which enabled men to blunt the discomforts of the moment by looking forward to something as mundane as bully beef and biscuit, and gave a focus for the little communities, gathered round tommy cooker or wood fire.”[3] While rations (even cold, canned ones) could certainly serve as a carrot (usually lacking actual carrots) at the end of a long night, Duffett’s review of the soldiers’ writings indicate that, no matter how acute their hunger, they were not usually thrilled with whatever appeared in their mess tins, particularly if they were in the front line.

Indeed, geography played a significant role in whether the soldiers received fresh, hot rations, or cold bully beef and biscuits. While Duffett highlights the numerous complaints about the latter, soldiers would generally only be eating those rations when they were in the front lines (and even then, not necessarily all the time). Men in the reserve and support areas, where soldiers spent the majority of their time, were much more likely to receive better food. Tim Cook, writing about the Canadian Expeditionary Force’s 16th battalion (which, of course, fought as a subordinate part of the BEF), noted that its “experience typifies a unit’s rotation. This unit spent 1,240 days of the war in France, putting in roughly 41 months of service. Of this time, thirty-four percent was spent in the front line or support, thirty-five percent in brigade or divisional billeting areas, and thirty-one percent in corps reserve far to the rear.”[4] Although complaints about the food at the front were common, we cannot forget that the average soldier spent much more time behind the front lines. However, even in the relative safety of the rest areas, repetition, routine and boredom continued to stalk the soldiers and could contribute to critical reactions to food. 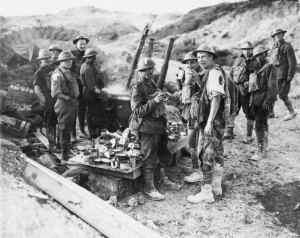 Canadian soldiers receive their rations during the Battle of Hill 70 in August 1917.

One particularly strong point in Duffett’s work is her detailed description of the massive effort and incredible amount of coordination that went into getting food to the soldiers at the front. This is an aspect of the war that is often taken for granted, or at least not given due consideration. Feeding millions of men engaged in an ongoing conflict is no simple task. One entire chapter (out of six) is devoted to the Army Service Corps (ASC) and its system for procuring food, getting it to the continent, and then distributing it through the various levels – from divisions, to battalions, to companies, until it eventually arrived in a soldier’s mess tin. A brief description in this review cannot do justice to this process, but some sense of the scale involved can be gleaned from the statistics Duffett cites: in 1918, Boulonge, one of five bases operated by the BEF to receive supply ships and distribute the contents to the front, obtained up to 21,658,847 lbs of meat and 15,875,667 lbs of bread per month. (p. 114) By the end of the war, a supply train containing not only food, but all the other supplies necessary for prosecuting the war, needed to be loaded and unloaded each day for each of the 64 divisions in the BEF. (p. 118)

There is also an interesting section on farming at the front, to complement the usually meagre supply of vegetables. In most cases, it seems as though these farms were relatively small-scale operations, started perhaps by an industrious battalion commander. It could be difficult to find volunteers to work the land, Duffet notes, as the constant rotation of units made it unlikely that a soldier would be in one place long enough to plant, grow, and eat any particular produce. (p. 124) Still, these farms could provide some variety from the monotony of biscuit, beef, and potatoes.

Although it can be difficult to maintain a chronological storyline when dealing with subjects such as army administration and logistics, the disjointed narrative in The Stomach for Fighting occasionally makes it difficult to follow the arguments presented. Instead of a linear timeline, taking the reader through the typical British diets and the state of army logistics before the war, problems posed by the initial mobilization and retreat from Mons, the different problems associated with feeding men in the trenches once the static war began, and the solutions developed to overcome all of these problems, Duffett moves back and forth along this continuum, particularly in the later chapters. 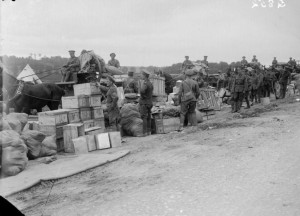 Telling the story chronologically would have made it easier for readers to compare the state of the soldiers’ food at different times throughout the war, and to see whether effective improvements were made (with the vast amount of men and supplies moving around by the end of the war, it would seem that some improvements must have been made). It would also enable a comparison, at different points throughout the war, between the nutrition of soldiers and civilians from various countries. Instead, although the book begins with a review of the pre-war diets and of the British working classes and soldiers’ first experiences with army food during their training, the following chapters are divided by subject, and each subject is treated chronologically. Although Duffett clearly shows that the soldiers were rarely happy with their rations, this method of organization does not give the reader the opportunity to see whether the army actually botched the provisioning, or whether the ASC simply did the best it could, with mistakes and soldiers’ gripes being inevitable.

One important piece of the supply puzzle which is absent from Duffet’s work is the army purchasing officer. These men were responsible for purchasing local meat and produce to supplement the rations shipped from Britain and around the world. She does note that “the bulk of the food eaten by the soldiers was shipped to the continent rather than purchased locally” (p. 113), but, despite a brief mention of the Supplies Purchase Department headquartered in Paris, the purchase of local food in France and Belgium is not explored at length.

Overall, though, The Stomach for Fighting provides a comprehensive overview of the enlisted man’s experiences with food in the BEF. It is probably too focused a subject for readers with only a general interest in the war, but this book is certainly recommended for readers interested in the psychological impact of war, as well as anyone studying trench culture or the daily experiences of enlisted men (rather than officers). There is also certainly an opportunity for further study here, particularly in comparing the experiences of soldiers in other armies on the Western Front with those of the British. Duffet’s book provides a solid blueprint for these future studies to work from.