Review of Ralph J. Whitehead’s The Other Side of the Wire: Vol. 2 by Maj. Chris Buckham

Ralph Whitehead’s seminal work on the experiences of the XIV German Reserve Corps during the first day of the Battle of the Somme (1 July 1916) is one of the most comprehensive accounts of the German perspective during the fight. The date, which has been connected with the death of the ‘old’ British Army (as a result of the 60,000 casualties sustained in one days operations), has been extensively written about from the perspective of the Allies. However, very little has been researched or drafted from the side of the Central Powers. This book, therefore, serves as the “audi alteram partem” (to hear the other side) for the Germans. 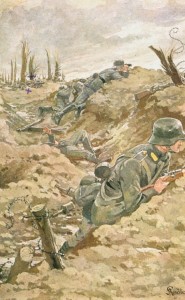 The author, while not a professional historian, has an admitted fascination with the First World War and the experiences of the German Army in particular. He has therefore taken it upon himself to research and present the German experience. He has consulted extensively the unit histories and firsthand accounts left by survivors. His attention to the XIV German Reserve Corps has resulted in a level of detail unparalleled in a vast majority of histories. Following on the success of his first volume, which tracked the activities of the Corps from September, 1914 until June 1916, Whitehead has narrowed his focus to a single 24 hour period that has been recognized as a defining interaction between the British and the German armies.

Given that the focus of this book is limited to 1 July 1916 in the region of the XIV Reserve Corps, it is logical that the primary focus will be tactical with an operational component setting the environment for the reader. Whitehead has taken a very structured approach to outlining the battle space for the reader; this is very helpful given the number of units and locations involved. The battlefield descriptions are  broken down regionally running from the north to the south through the XIV Corps area of operations by German unit (thus commencing in front of Beaumont-Hamel with Regiments 121 and 119). Using German operational maps (either original or reproduced for clarity) he subdivides his narrative into individual company size engagements according to pre-existing delineations identified by the Germans. Further scope and depth are added by the inclusion of photographs, maps and firsthand individual recollections all relating to that particular engagement.

The maps used to illustrate the book are, for the most part, very beneficial. They are all in their original German but are relatively easy to follow. It would have been helpful to have had a single overall ‘control’ map at the beginning of the book in order to provide context. Some unfortunately, are far too detailed and busy and are therefore of questionable benefit to the narrative.

Whitehead provides an excellent chart outlining the German rank structure and there equivalents in the English system. This is of note due to the fact that he refers to soldiers mentioned by their regimental rank affiliation as opposed to a standardized one. Thus a medical captain is not a Hauptmann but a Stabsarzt and a Sergeant Major in the cavalry is identified by his proper Wachtmeister as opposed to the standard Feldwebel. This is indicative of the attention to detail incumbent in this book.

Additionally, through the narration of the British assaults and the German responses, the reader comes to understand in much greater detail the evolution and nature of trench warfare at this stage of the war. How communications were executed, command and control maintained, the immediate response drills of the Germans to breaches in the trench system and the horror and close-in violence of hand grenade, entrenching tool and machine gun engagements are all outlined in explicit detail. Perhaps of a more insidious and psychological nature are the experiences of the soldiers waiting out the prolonged (in this case eight days) British artillery preparation for the assault, waiting in their deep bunkers unable to strike back but focused on the opportunity for payback; having only to endure. This followed by the post battle images and sounds of the thousands of British dead and wounded trapped in no-man’s land, unable to reach safety and succor, doomed in many cases to die alone and in pain; often times meters from the German lines.

The psychology and mental strength of the German soldier under these conditions is also revealed through their personal writings and recollections; Whitehead’s narrative sheds light on some of the  coping mechanisms of the individual soldiers. Given, however, the fact that this narrative centres upon one of the more violent days of the war exclusively, it is easy for the reader to forget that this was an exceptional level of violence and not the norm. Despite the fact that the book focuses almost exclusively on the German experience, the reader cannot help but also be moved by the sheer scope of the British slaughter (on average at least at a ratio of 10:1) and the audacity and courage with which they pressed their attacks.

It must be stressed that this is not a book specifically studying and interpreting strategy or the changing nature of war and its effects upon the individual soldier. Rather, Whitehead has recreated the conditions and experiences of the German units and soldiers as they unfolded on 1 July 1916. Through his narrative and the narratives of the soldiers themselves, the reader is provided an insight, albeit one bracketed by the limitations of language, into one horrible day. His primary source material (both published and unpublished), drawing upon numerous unit histories and first person recollections, is notably augmented by an extensive secondary source list.

Helion Books has produced a first rate book of the highest quality. Ralph Whitehead has written a book that is a critical addition to any aspiring military historian of a professional or casual background. This book is recommended in the strongest possible terms.