Review of Roger Sarty’s ‘War in the St. Lawrence’ by Nicholas Tracy

Sarty’s War in the St. Lawrence is a masterpiece by one of Canada’s most important naval historians whose work on the subject began when he first joined the Directorate of History, Department of National Defence, in 1981. The focus is on the little known u-boat war in the Gulf of St. Lawrence, fought in internal Canadian waters. The campaign was the closest the Second World War came to central Canadians. From the nationalist and parochial perspectives of Quebec politics, the vulnerability of the St. Lawrence to penetration by German U-boats was the most powerful justification for (or reason to criticize) Canadian commitment to the European war, and prime minister Mackenzie King was to find the fortuitous timing of the first dramatic sinkings in the river valuable in deflecting conflict within this cabinet about the referendum on “conscription if necessary, but not necessarily conscription” for military service.

This is a campaign history, as opposed to battle history. Battle histories are heavy on tactical movements, and personal experience. Sarty has been forced to limit such detail in order to project a wider view. To put the reader into the picture, Sarty, who worked on the official histories of the Royal Canadian Air Force, and the Royal Canadian Navy, and at the Canadian War Museum, describes in his opening chapters, with beautiful clarity and simplicity, the technology of naval defence of shipping, and the role of the Canadian Navy in the Battle of the Atlantic. To those familiar with accounts of that campaign, the most striking differences in the experience in the St. Lawrence are the complexity of the problems posed for defence and attack alike by the layering of fresh and salt, warm and cold waters. U-boats trimmed to dive could bounce unintentionally off denser layers, making them surface unexpectedly. If, however, they did pass beneath the density boundary they could find complete security from detection by naval Asdic (sonar) which would be deflected upward. Aircraft of the Royal Canadian Air Force Eastern Air Command were central to the battle of the St. Lawrence, and the very success of the Germans in developing a METOX radar detector amplified the value of air patrols. The u-boats could not expect to reach a firing position for attacking merchant ships unless they could manoeuver on the surface, but they had to dive every time their METOX indicated an aircraft was in the vicinity. For an aircraft to actually destroy a u-boat required a very rapid approach, and well-placed depth charges. But keeping the u-boats down was half the battle. Many of the surface escorts were the Fairmile launches and Bangor class minesweepers that were easier to build, but carried fewer depth charges, than the corvettes and destroyers that escorted the ocean convoys to Europe. 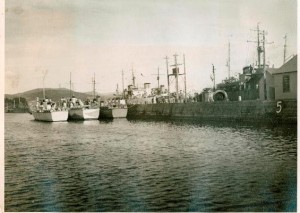 The 1942 U-boat assault in the Gulf began with the arrival of U-553 in May, even before the ice was gone, and extended to16 September, at which point Berlin concluded that the Canadian navy and air force posed too much danger. As a last savage act, U-69, as it withdrew from the Gulf, sank the Newfoundland ferry Caribou on 14 October, killing 136 people. Journalistic reaction to the shipping losses off Gaspé, often within sight and sound of the people along the shore, and especially to the loss of the Caribou, was highly critical. Unaware of Berlin’s decision to withdraw, Ottawa’s reaction to the shipping losses was to close down St. Lawrence traffic early, transferring late season shipping to the Atlantic ports. Had all the facts been known, the Gulf campaign might have been considered a victory, but it did not seem that way in Ottawa, and the decision was made to concentrate naval and air resources for the battle in the Atlantic where only could Germany be defeated.

That commitment, and the pressure being exerted by Britain and the United States to put all Canadian forces under their command, led to the appointment of a single commander-in-chief for all of Canada’s maritime forces, both navy and air force. Then the US Navy, which was increasingly concentrating on the battle in the Pacific, was persuaded to resign its command over convoys in the northern Atlantic. Admiral Murray, RCN, C-in-C Canadian Northwest Atlantic, thus became the only Canadian officer to command an Allied theatre during the war. The Canadian Navy was entrusted with direct access to the “Ultra” decripts of u-boat communications. A newly created Defence Communications company worked with the existing patchwork of local telephone and telegraph systems to establish dedicated 24-hour communications along the south shore of the Gulf, and radio communications along the northern. 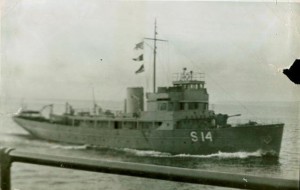 A civilian yacht converted for military service, HMCS Raccoon was one of several Royal Canadian Navy ships sunk during the battle of the St. Lawrence. (George Metcalf Archival Collection
CWM 20070195-008)

Unaware of how successful had been the Canadian defensive operations in late 1942, the Canadian Navy wanted to keep the Gulf closed in the spring of 1943, but the British Ministry of War Transport insisted that the rail communications to the Atlantic ports was inadequate to ensure the needed flow of materials, and it was agreed to commence running 22 ships per month through the Gulf. U-262 entered the Gulf in April 1943 tasked to pick up prisoners of war ordered to escape from Camp 70 near Fredericton, but the prisoners did not get away, and no shipping was lost to u-boats in the Gulf during the 1943 season. Late in the year there was another attempted break-out, from Camp Bowmanville, and one German officer did in fact make it to the rendevous on Prince Edward Island, but he was captured there by a detachment that was awaiting the u-boat. It, however, detected the trap laid for it and departed. It was not until 1944, after the defeat of u-boat wolf-pack tactics led to Berlin retasking u-boats to independent operations, that there was again a threat to shipping in the St. Lawrence. The problem for the defence was increased by schnorkel tubes fitted to the u-boats which permitted them to operate their diesel engines when trimmed to run just below the surface. The increasing reliability of signals intelligence, however, and the stronger forces available to the defence, made this last chapter in the Gulf war a Canadian success – one Sarty describes well and in considerable detail.

Sarty’s book is so well written that it is a clear choice for those interested in military history, and it should also be found in any serious naval history library. His concluding chapter provides an excellent executive summary. Although the official histories also describe the war in the St. Lawrence, Sarty’s book provides a more accessible and more closely focused account. It deserves to take its place with Marc Milner’s North Atlantic Run: The Royal Canadian Navy and the Battle for the Convoys (1985) and The U-boat Hunters: The Royal Canadian Navy and the Offensive Against Germany’s Submarines (1994), but has the advantage of the more recent work on the official histories at the Directorate of History, the last volumes of which were published in 2002 and 2011. There is only one major criticism. I am sure that Sarty knows that ships and aircraft movements are measured to this day in nautical miles, and nautical miles per hour (or knots), because these units are needed for navigational purposes – a nautical mile being one second of a great circle. The use of kilometers, and kilometers per hour, far from facilitating comprehension, isolates the book from the established canons of naval history. This is a real irritant, but that apart, this book is strongly recommended.