Review of Teresa Iacobelli’s Death or Deliverance by Alyssa Cundy 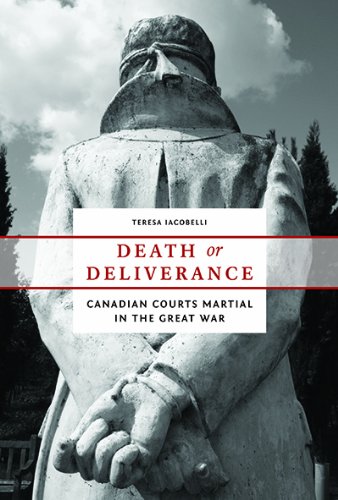 On 8 November 2006, the British Parliament pardoned all British Empire soldiers executed for cowardice and desertion during the First World War. In total, 306 men were posthumously pardoned,[1] including twenty-three soldiers who served in the Canadian Expeditionary Force. In Death or Deliverance: Canadian Courts Martial in the Great War (2013), Teresa Iacobelli skillfully examines the myriad cases where Canadian soldiers accused of desertion managed to escape the firing post. In contrast to the grassroots pardon campaign in the United Kingdom, whose “Shot at Dawn” website denounced the guilty verdicts as “stupid, spiteful, and shameful,” (p. 121) Iacobelli points to the 178 commuted death sentences of CEF soldiers to illustrate that justice was often meted out in a way that was consistent with military and civilian law in the early twentieth century. In short, although military justice could be swiftly and even arbitrarily delivered, the Western Front was not the lawless Wild West.

Through trial transcripts and service records housed at Library and Archives Canada (LAC), Iacobelli vividly reconstructs the courts martial process, starting with the crimes of the men accused, followed by their trial and confirmation process, and ending with the various reasons for their commutation. Why did some soldiers refuse to fight? The book insists that there was not one overriding factor that contributed to desertion in the Canadian Army throughout 1914-1918. Battle exhaustion was a cumulative process. Some soldiers were plagued with physical and psychological ailments that directly affected their behaviour (i.e. shell shock), while others were homesick or simply wanted to rest for a longer period than the war dictated.

In trying to establish a motive for desertion, the Canadian military justice system realized that the intention of the accused was everything. The case of Napoleon Barré of the 4th Battalion demonstrates the importance of intention. At his trial in September 1917, Barré told the court martial panel that he never intended to desert his unit. He had merely consumed too many drinks at a local tavern and fallen asleep in a field. Were his actions careless? Undoubtedly, given that his inebriation caused him to miss a battalion order to proceed to the frontline. But it did not necessarily mean he would face the firing squad. Barré was sentenced to five years of penal servitude and demobilized in August 1919 (p. 80-81). Iacobelli uses this trial and various others to highlight the nuances of these legal proceedings. The accused could take the stand, for instance, or have a trusted or well-liked comrade, known as the “prisoner’s friend,” to speak on their behalf. Moreover, although trials took place over the course of several hours, the defence still had the opportunity to cross-examine the prosecution’s witnesses and make a closing statement to the court (p. 66).

Cases were tried individually, which allowed the court martial panel to weigh the evidence and treat each soldier as innocent until proven guilty. The author is quick to note, however, that not all Canadian soldiers benefited from these checks and balances in the justice system. In the book’s most compelling and innovative section (Chapter 5), Iacobelli analyzed more than 350 letters of recommendation that accompanied accused soldiers’ files up the chain of command to Field Marshal Douglas Haig. These letters from commanding officers, especially at the battalion level, provide much-needed insight into the external factors and daily stresses that influenced unit morale. For example, if morale was low due to an increase in the desertion rate, a commanding officer could recommend death over deliverance in order to deter others from a similar fate. More often than not, though, commanding officers sought clemency for the accused.

It is telling that between 1914 and 1920, ninety per cent of all death sentences for desertion in the British Army and dominion forces were commuted in favour of lesser sentences (p. 92). Executions for desertion in the German Army and the American Expeditionary Force followed a similar pattern of lenient sentencing. Ultimately, Iacobelli has succeeded in showing that there was considerable leeway with regard to military discipline on the Western Front. Yet more evidence is needed to establish the claim that “the rising concerns over immigration” (p. 105) in early twentieth century Canada led to a rise in the death sentences among Russian immigrants in the CEF. That may well be true, however, the reader is left to wonder why Eastern European immigrants experienced this particular prejudice given that Iacobelli admits: “the total number of Russians or Russian subjects who served in the CEF during the First World War is still unknown” (p. 59). The link between underlying ethnic tensions and convictions for serious crimes in the Allied forces is an important one. But it is too tenuous here in regard to Russian émigrés. Her discussion of the plight of French Canadians in the 4th and 22nd battalions is much more convincing and well researched.

Death and Deliverance is the worthy recipient of the 2015 C. P. Stacey Prize for distinguished works in Canadian military history. Building on the research of Gerard Oram’s Military Executions during World War I (2003) and Tim Cook’s Shock Troops: Canadians Fighting the Great War (2008), it advances the field of military justice in Canada by providing “the facts, the context, and the middle ground” (p. 11) regarding the elastic and interconnected nature of morale and discipline on the Western Front. Iacobelli does not pass judgment on the accused or the men who handed down death sentences. This is a thoroughly refreshing approach compared to the increasingly politicized nature of the decades-long pardon campaign in Britain.[2] Although well intentioned, supporters of the 2006 Pardon Bill clung to the outmoded notion that a generation of brave “lions were led by donkeys” to the slaughter. Death and Deliverance shows that these “donkeys” seriously weighed the pros and cons of capital punishment and—nine times out of ten—chose to be merciful. The book is a true asset to military historians and a worthwhile read for anyone looking to gain a better understanding of the First World War.