Review of Timothy Winegard’s For King and Kanata: Canadian Indians and the First World War by Matthew Barrett

During the First World War, approximately 4,000 Aboriginal volunteers served in the Canadian Expeditionary Force. On the home front, certain impoverished native communities donated money and resources to support Canada’s war effort while other bands were more ambivalent to the cause. In the extremely well-written and thoroughly researched For King and Kanata, Timothy Winegard investigates the intricate relationship between First Nations people, the Canadian government and the British imperial ministries. Utilizing a diverse collection of archival records, statistical databases, and soldiers’ accounts, Winegard presents a much-needed reinterpretation of the administrative and military decisions that shaped the wartime experience of native people at home and overseas. The book further provides important insights into how history, race, and culture affected Canadian perceptions of Indians during the early twentieth century. 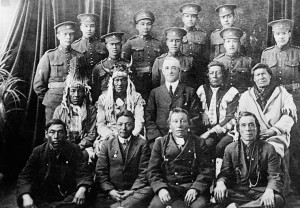 Winegard’s study challenges a prevailing historiographical paradigm termed the “Forgotten Warrior” genre, which aims “to ensure that indigenous veterans receive acknowledgement for their sacrifice in increasingly reconciliatory and apologetic Canadian political and social environments” (p. xi). As Winegard observes, the “Forgotten Warrior” approach limits historians’ understanding of indigenous participation in the First World War by employing uncritical generalizations within a commemorative national framework.[i] Departing from the straightforward narrative of recognition and remembrance, Winegard adopts a far more comprehensive analysis that situates Canadian wartime decision-making in both a national and an imperial context. Winegard persuasively argues that Canadian policies concerning native military participation were tied not only to the colonial settler-state experience and racial attitudes, but also to practical necessities on the front and the manpower demands of the imperial government.

Organized into nine chapters, For King and Kanata covers the social, administrative and military history of Canadian Indians throughout the First World War. The first three chapters survey the ideological and cultural belief systems that influenced prewar Canadian attitudes toward Natives’ potential for military service. Chapter 1 traces the early military history of First Nations people during colonial wars and the subsequent decline of Native sovereignty in relation to the development of the Canadian settler-state. Chapter 2 reveals the importance of pseudoscientific concepts such as Social Darwinism and the martial race theory in buttressing Canadian perceptions of Indians as warlike but doomed to extinction. Chapter 3 examines Canada’s prohibition on Indian volunteers during the Boer War to argue that the federal government failed to create a coherent or consistent policy for native military participation at home or overseas. 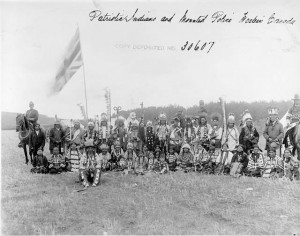 With the earlier chapters forming the necessary conceptual background, chapters 4 to 6 chart the transformations in Canadian policy toward Indian military service during the First World War from unofficial exclusion to active recruitment. During the first year of the war, the Canadian government continued the practice established in the Boer War of rejecting native volunteers because British Canadian men satisfied the recruitment quotas. However, by late 1915, massive casualties on the Western Front caused the imperial government in London to demand greater support from its dominion partners. To fulfill increased manpower commitments, Canadian recruiters began to canvass native communities for volunteers. Winegard makes a significant contribution to our understanding of the change in Canadian policy by using imperial archival sources to demonstrate that the British Colonial and War Offices were instrumental in requesting and endorsing Indians for military service (p. 54- 55). Chapter 7 details the experience of Indian soldiers on the battlefield while Chapter 8 considers the role of First Nations communities on the home front. As Winegard makes clear in the final chapter, the wartime contribution of native soldiers and civilians did not change postwar Indian Affairs policy nor did it result in substantial improvement for First Nations’ political and socio-economic status. Canadian policymakers continued to pursue paternalistic strategies, as they believed Indian peoples remained the beneficiaries of compassionate governmental oversight.

Although his heavy reliance on imperial bureaucratic records and ministry archives could have obscured the voice of native people, Winegard carefully highlights the diverse range of attitudes expressed by Aboriginal individuals toward the war, recruitment and their place within the British Empire. Even as many Canadian Indians expressed their willingness to fight for “King and Country,” they were equally determined to define the conditions of their participation. By asserting native sovereignty, bands forced the federal government to modify recruitment strategies in accordance with treaty rights. When the Borden Government enacted conscription in 1917, First Nations groups resisted, arguing that the Crown treaties of the 1870s exempted Indians from compulsory military enlistment. Recognizing that native people were wards of the Crown and lacked citizenship rights, the Canadian government conceded that it would not conscript Indian men (p. 103).

One of the author’s central objectives is to identify why many native men were eager to serve despite the federal government’s long history of exclusionary and assimilationist policies. As Winegard explains, for many Indian volunteers overseas military service symbolized their traditional warrior ethos, continued allegiance to Crown and an opportunity to advance equal rights at home. Native chiefs often recalled the historical alliances that their bands had established with Britain dating back to the American Revolution and the War of 1812 (p. 126-7). The memory of these colonial wars served not only to highlight the important role of their ancestors in defending the Empire but it was also useful for promoting a renewed martial spirit in Native youth. Although not every Native leader actively encouraged enlistment, one Assiniboine chief expressed the sentiment of many by telling young men, “Don’t die a woman’s death in bed. Die the warrior’s death at the end of the warpath trail, where a coup-feather awaits the brave” (p. 11). The author’s examination of native motivations would have benefited from a fuller discussion of how notions about gender and masculinity shaped both Canadian and Aboriginal responses to the war. 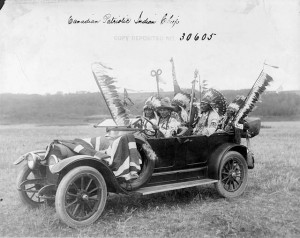 One of the strengths of For King and Kanata is Winegard’s perceptive exploration of the contradictory images of the Indian in the Canadian imagination. At the same time that many Canadian leaders depicted natives as exemplary warriors owing to their supposed innate martial prowess, paternalistic policymakers also regarded them as a dying, childlike race unsuited to military service. The contrasting racial perceptions of Indian volunteers resulted in the confused recruitment policies that marked the early stage of the war. Minister of the Militia Sam Hughes for instance justified the unofficial exclusion of Indian recruits by speculating that “Germans might refuse to extend to them the privileges of civilized warfare” (p. 45). Conversely, during the period of active recruitment, Canadian propagandists embraced the romantic image of the native “noble savage” as the embodiment of Canadian military strength. The fascinating insight into German perceptions of Canadian Indians as warriors increases the international scope of the book (p. 111). However, after the war Indian Affairs downplayed native martial abilities as administrators continued to impose assimilationist policies designed to make First Nations peoples more sedentary (p.155). The focus on cultural representations of the Indian warrior complements related studies such as R. Scott Sheffield’s The Red Man’s on the Warpath: The Image of the “Indian” and the Second World War.[ii]

Although Winegard’s overall argument and presentation is very strong, a notable shortcoming of the book is the unsatisfactory conclusion. The brief concluding remarks largely summarize the evidence rather than synthesize the central cultural, social, administrative and military themes. Furthermore, some of the author’s final comments concerning the continued struggle for native military recognition risks perpetuating the “Forgotten Warrior” narrative that the author had rejected at the outset.

Nevertheless, For King and Kanata makes a vital contribution to Canadian historiography by stressing the national and imperial influences that shaped Canada’s Indian policies during the First World War. Written in a clear and compelling style, the book will appeal to academics and students, as well as members of the public who wish to learn more about the military and cultural history of this interesting period in Canada’s past. In an upper-undergraduate or graduate-level classroom, For King and Kanata would serve as an essential text that offers an excellent analysis of the social, military and administrative connections between Canada, Britain and First Nations people.