Noah Richler’s What We Talk About When We Talk About War has recently been nominated for a 2012 Governor General’s Literary Award. A big congratulations to Noah and our friends at Goose Lane Editions.  A full list of nominees can be found here. In light of this honour we have decided to re-post a review of Noah’s book by Centre staffers Kirk Goodlet (University of Waterloo) and Geoff Keelan (University of Waterloo), which was published earlier this Spring.

In this thought provoking and erudite work, Noah Richler explores what he sees as a fundamental shift in Canadian politics, discourse, and identity in relation to foreign policy and international development. At the crux of his interpretation lays an assumption that over the course of one decade, from 9/11 onward, Stephen Harper’s Conservative Government initiated a campaign of myth-making that distorts attitudes about Canada’s role in foreign policy and, particularly, the War in Afghanistan. For Richler, the Tories along with other notables like historians David Bercuson and Jack Granatstein, journalist Christie Blatchford, and hockey icon Don Cherry, have all helped refashion a narrative of Canadian history from one defined by Pearsonian idealism and peacekeeping to one in which Canada is a “warrior nation” entrenched firmly by the “Vimy Effect.” (p.47ff)

Relying on newspapers, reports, and few academic works, Richler sets out to investigate whether “Canada is today a ‘warrior nation’ [and] that the peacekeeping version of Canada was a fifty-year aberration…or that the Canada with an innate disposition toward ‘soft power,’ ‘making a difference’ and the sort of peacekeeping work that is now so disparaged is the underlying constant and the ‘warrior nation’ is the fiction.” (p.43) Not until the final chapter does Richler provide some semblance of an explicit thesis statement, although it is tacitly weaved throughout the book. Here he claims that “in the first decade of the twenty-first century, an epic point of view regarding the war in Afghanistan replaced the peacekeeping narrative.” (p.322)

What We Talk About When We Talk About War is separated into five lengthy chapters which recount the “phrases and forms of story that Canada has used in order to talk itself into, through and out of the war in Afghanistan.” (p.44-45)  “The Vimy Effect” describes the downfall of Canada’s “new” foundational myth of peacekeeping, formed in the aftermath of the Second World War, throughout the 1990s and into the 2000s.  The following chapter, “Warrior Nation,” examines the militarized idealism that replaced it and the shift in national discourse as Canada entered the war in Afghanistan.  The struggle to justify Canada’s presence there is explored in “Building Schools for Girls.”  Here, Richler expands his argument that although conservative forces attempted to define the Canadian presence overseas as a necessary action, they could not overcome Canadians’ need for a deeper, humanitarian justification, such as building social infrastructure, advancing women’s rights and not simply in defence of NATO allies. Richler argues in his next chapter, “The War Becomes a Mission (Impossible),” that the narrative had to be further transformed as it became clear that our armed forces could not substantially improve the lives of Afghans or change the country’s corrupt government.  In his final chapter, Richler asks “What is to be done?” Here he suggests the creation of a Peace Operations Regiment which would serve as a “specialized Canadian military force acting as a third party and designed for the particular tasks and challenges of conflict resolution in global theatres in which Canadian interest, not self-interest, is the motivation.”  (p.349) In his final pages, he sums up his critical account of Canadians in Afghanistan and suggests that our failure is intrinsically tied to a systematic policy of dehumanization, of both enemies and dissidents, which forms the core of the “Warrior Nation.” (p.362)

For historians, What We Talk About When We Talk About War is a work that leaves much room for criticism.  The book deals with Canadian attitudes and ideas, but in some ways Richler is far too insular. For an advocate of a perspective that encourages outward-looking and humanitarian idealism Richler curiously downplays broader international geopolitical developments and fails to take into consideration whether other states have experienced similar misgivings over their supposed ‘humanitarian pasts’. These developments include the general devolutionary trend of UN-led missions to NATO and the further transferring of authority to sub-regional organizations such as the European Union and African Union. This does not mean that the UN has been discarded altogether, but rather that the Security Council has played a minimal and token role in sanctioning the use of NATO forces across the globe. 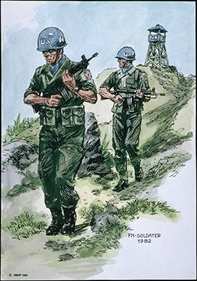 Connected to this idea is the more serious conceptual problem of chronology in Richler’s account. We do not necessarily disagree with the substance of his argument, but to impute all blame on Harper’s Government and a few Canadian intellectuals is disingenuous because it ignores crucial shifts in Canadian foreign policy and international affairs that began long before Harper’s ascension to power. On a number of occasions Richler mentions the Somalia affair, genocide in Rwanda, and the wars in the Balkans (e.g. p.48-50; 61-63). However, it is during the latter war that the role of the Canadian military began to change, manifested in NATO’s 60,000 strong Implementation Force (IFOR) of which Canadians played an important part. Although sanctioned by UN Security Council Resolution 1031 and others, IFOR, which was replaced after its one-year mandate by Stabilization Force (SFOR) in 1996, can hardly be considered a peacekeeping mission.[1] The point is that a transition, following the complete failure of UNPROFOR, from peacekeeping to war-making was already underway as a result of successive UN failures and increasing public scrutiny in Canada and abroad. Following the events of 9/11, Harper’s Conservative Government merely facilitated a development that had started in the early 1990s by mobilizing economic resources and, crucially, the language we use to describe Canadian involvement in war.

It might be wrong to criticize Richler for his lack of dialogue with academic and historical works on memory and history, since we think this is beyond the scope of his book. Nonetheless, something is to be said about his vendetta against David Bercuson and his almost total reliance on popular history books (Niall Ferguson’s The Pity of War, to name one found in his section on sources, p.368), as well as newspapers—most of which come from cities in Central Canada. This limited source base broaches questions about the pervasiveness of the attitudes he describes.

Adding to this is Richler’s selectivity of Granatstein’s commentary regarding the military and politics. In at least one article, Granatstein has virulently criticized the Tories for cutting funding to the long-standing Security and Defence Forum (SDF), an initiative which has supported research on military history and foreign policy in universities across Canada for the last twenty years.[2]  While Richler may argue that military-funded academia is part of the problem, the point remains that his array of conservative forces are not nearly as homogenous as he portrays them.

An additional conceptual problem from our historical perspective is the place of the Second World War. Readers hoping to find out how governments have mythologized or employed the memory of Canada’s role in this war will be disappointed, as the book rarely engages with it or other conflicts in which Canadians have participated (e.g. Boer War, 1899-1902).  For historians, as careful students of periodization, this book might be better entitled, “What we talk about when we talk about war in the last decade.”

Still, if we shed our historian personae and approach Richler’s book as Canadians, it is difficult not to agree with many of his reviewers[3] – that it is a good thing that Noah Richler wrote What We Talk About When We Talk About War.  For most serious readers of his work it is clear that, regardless of whether you agree with him, he has created a valuable debate where once there were only meagre offerings.

The most important detail of Richler’s work is not his advocacy for the resurrection of a “peacekeeping nation,” or a sprawling George Grant-esque lament for the Canada that once was, but instead the warning that he offers: “War enters the unconscious early,” he writes. (p.11) The danger of having a one-sided narrative about Canada’s military and our role in Afghanistan is that there is little to counter the idea that fighting and promoting wars must be good for us.  What sort of Canadians will exist in future generations if we stop questioning whether wars should be fought and only ask how we should fight them? 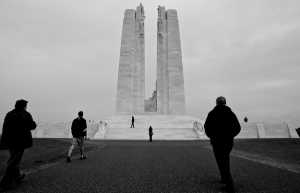 Central to Richler’s argument, and repeated throughout the book, is that in the aftermath of 9/11 and to present day, the “language of the battlefield [is] all-pervasive.” (p. 338) From Afghanistan, to military purchases, to the government reaction to citizens’ protests, there exists a militarized mindset where the appropriate response to complex social debates is a forceful, aggressive response.  We are far from agreeing with Richler’s positions on a Peace Operations Regiments or his implicit condemnation of explicit support for the military, but it is harder to reject his idea that there is something unsettling about a complete dismissal of all opposition rather than engaging with it.  Sometimes military action for Canadian interests is the best path for our nation – but, sometimes it is not.

Richler’s work is a testament to the fact that Canadians are very good at reimagining themselves. From colony to nation, imperial empires to commercial empires, for better or for worse, we have excelled at adapting to historical circumstance.  What We Talk About When We Talk About War, right or wrong, reveals that in the aftermath of Afghanistan, Canadians may need to once more rethink who we are and what we believe.

[1] See Annex 1A “Military Aspects of the Peace Settlement,” in The General Framework Agreement (a.k.a. The Dayton Peace Accords), December 1995.