Somali Women and Community Support in the Aftermath of Sexual Violence

The prevailing image of Somali women in the western world is likely to be – if visible at all – as victims. They certainly face more violence and poverty than the majority of Canadians, and in fact, most of the globe. Despite obstacles to health and happiness, several Somali women work incredibly hard to improve not just their own lives, but the lives of their countrywomen as well. One of those women is Ilwad Elman.

Elman spent most of her life in Canada. Her father, Elman Ali Ahmed, was a peace activist who ran community programs alongside her mother Fartuun Adan. Together, they coined the popular Somali peace slogan “Put down the gun and pick up the pen.” When violence escalated in the country in the 1990s, Adan came to Canada with her daughters. Ahmed stayed behind to continue his work, and was later assassinated. When Elman was a teenager, her mother returned to Somalia to once again work for peace in a country filled with conflict. Not long after, Elman followed.

One of the reasons Elman returned to her home country was concern for her mother. “We would hear about gunshots and mortars and conflict in the middle of the city and she would just disappear for two weeks and we’d have no contact with her,” she recalls, but said when she arrived, she found things weren’t as bleak as they had seemed. “I already knew it was going to be a very unstable, chaotic and lawless place but what I was relatively surprised to find out is that there is life beyond the ruins and despite the conflict there’s still life, there’s still love, there’s still joy, and things progress.” She decided to stay on to work with the Elman Peace and Human Rights Centre, where she is now the Director of Programs and Development.

Together the founders fundraised a modest budget, which they used to provide women with both physical and psychological care in the wake of sexual assault. It is not an easy task in a country where women who are raped are often further victimized and shamed by their communities – in fact, the organization works with police and district commissioners to promote due process in cases where rape is reported, rather than a victim-blaming mentality. Sister Somalia now operates in three regions of the country, with centres run by women who were previously helped by the organization. It provides counseling, post-exposure prophylaxis to reduce the risk of contracting disease, and safe houses. The need is obviously great – by the end of 2013, Elman says the program had helped more than 2800 victims directly. 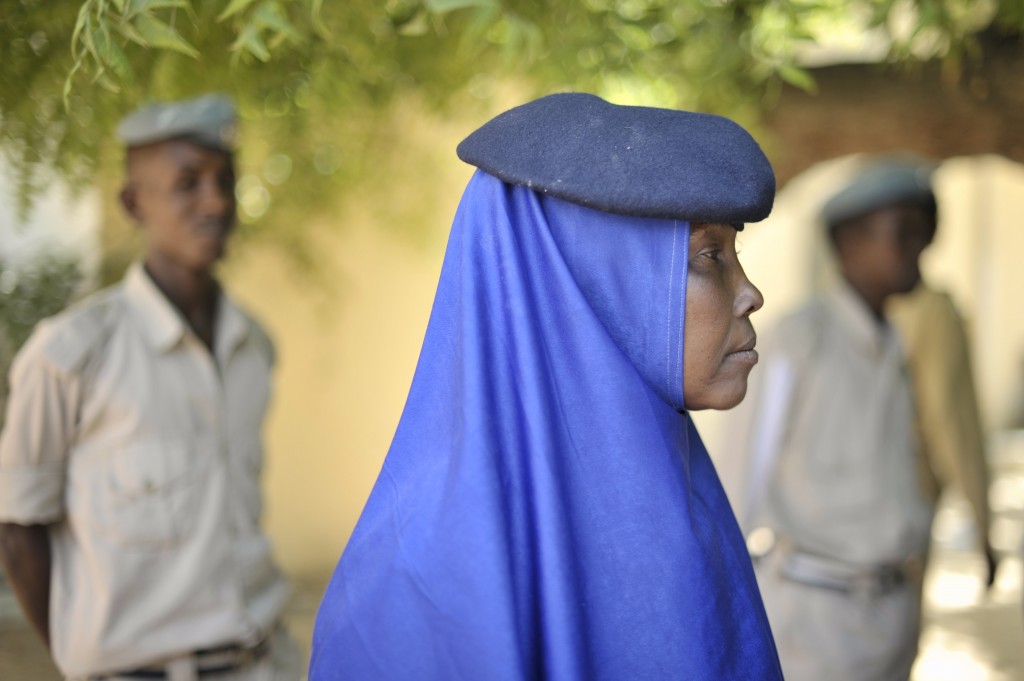 A female Somali police officer watches a training exercise taking place at General Kahiye Police Academy in Mogadishu, Somalia. The African Union Mission in Somalia (AMISOM) is currently training one hundred Somali Police officers in a program aimed at equipping the Somali Police Force with the necessary skills to effectively arrest suspects, stop vehicles at checkpoints, and cordon off areas.(June 2014)

One of the campaigns run by Sister Somalia is a letter-writing initiative, which allows Somali women to receive words of encouragement from other women half a world away. The organization encourages donors – or anyone with a story to share – to take part, and many Somali women have found great inspiration in the correspondence. “We’ve had women who received their letters months ago and carry them with them every single time they come to the centre,” says Elman. “It shows that people care, that they’re not forgotten and what’s happening to them unfortunately does happen other places in the world too.” Elman says they get letters from a range of people – from lawyers offering advice, to young girls writing to their Somali counterparts. In some cases they have been able to arrange a continuous pen pal-like relationship between women. Elman describes it as a new model of aid. “There’s so much donor fatigue everywhere around the world,” she says. “It doesn’t always have to be financial support…they can share the sadness and the troubles a woman is facing in Somalia by just taking the time to write something.”

While hearing from women across the world provides a sense of hope and global unity, Elman says the organization often looks within Somali borders for support as well. They have a variety of partners that assist with their funding, including United Nations agencies and private philanthropists that focus on specific projects. They have also set up their own trust fund in an effort to become sustainable. But Elman says Somalia has a thriving private sector that the Centre does not overlook. “What we try to do is reach that commonality. What we’re doing is for Somali people, why can’t the people that are well off in Somalia help others that are more vulnerable?” she explains. The Centre relies on the business community for more than financial support – it provides employment opportunities to vulnerable populations including women and former child soldiers that have receive vocation training from the Elman Centre.

While Sister Somalia does as much as it can for women who have suffered, they eventually have to return to Somali streets, camps and communities that remain unsafe. “One of the things we noticed at the onset of Sister Somalia is that we were helping the same woman after her first attack, then after her second, after her third,” says Elman. “She was still exposed to [the] same risks.”

So the program has a preventative side as well. It engages with community elders, government and religious leaders to deter sexual assault. Elman says in the almost entirely Muslim country, religious leaders in particular have a lot of pull, and when they speak against gender-based violence at the mosques it reaches a wide audience: “Friday prayers are huge, and to be able to reach that demographic of men who are in a very patriarchal society, that think that sometimes violence against women is a necessary milestone in a girl’s life – it’s a whole new market of people that we can’t reach with our advocacy.”

In addition to combating a mentality that promotes attacks on women, Sister Somalia advocates for tangible safety measures. It connects survivors with community leaders, so they can organize protection initiatives such as a neighbourhood watch, and it supports infrastructure improvements including increased lighting. Elman says even equipping women with whistles can make a difference, “to prevent these issues from happening in an environment that’s not yet progressive enough for women to be secured.”

Of course, Somalia remains a difficult place for all people, especially women. Violence, attacks and poverty remain the norm for many citizens – but Elman says sexual violence is now on the social agenda in Somalia, thanks to victimized women that speak out. This is true outside of the country as well. Recently representatives from more than 100 countries gathered in London for the End Sexual Violence in Conflict global summit, co-chaired by UK Foreign Secretary William Hague, and actress/United Nations special envoy Angelina Jolie (whether the summit produced will produce any tangible results remains to be seen).

Sexual assault is a problem all over the world, but particularly in countries rife with conflict, where rape is often used as a weapon. Among the delegates at the London conference was Leymah Gbowee, a Liberation peace activist, Nobel peace prize laureate, and co-founder of the International Campaign to Stop Rape and Gender Violence in Conflict. In addressing the summit, Gbowee said: “Sexual violence and rape doesn’t arise solely out of conditions of war; it is directly related to violence that exist in women’s lives during peace time. Militarization and the presence of weapons legitimise new levels of brutality and impunity. This violence, unfortunately, continues in post conflict.” 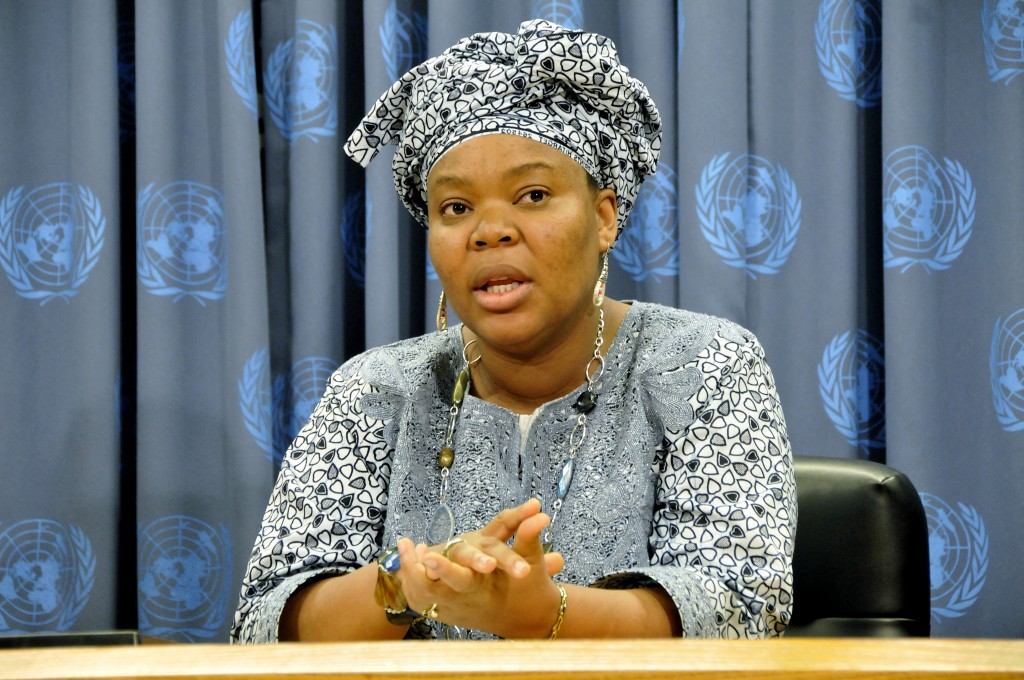 Somalia has certainly made gains since the early days of its civil war – the government now operates from Mogadishu rather than neighbouring Kenya, and runs a police force and military, both of which include women (Elman’s sister Iman is part of Somalia’s national army). It remains, however, a country fraught with violence. With the situation changing so frequently, Elman says it is easy to get discouraged, or have trouble gauging the impact of the Centre. But often, it is the women who come seeking help that give her hope. “What really makes it worthwhile, is when you can see somebody being taken into your centre and coming in maybe at their lowest point, their most vulnerable,” she says, “And now is working towards creating a better environment for people who are likely to go through the same experiences that he or she had gone through.” 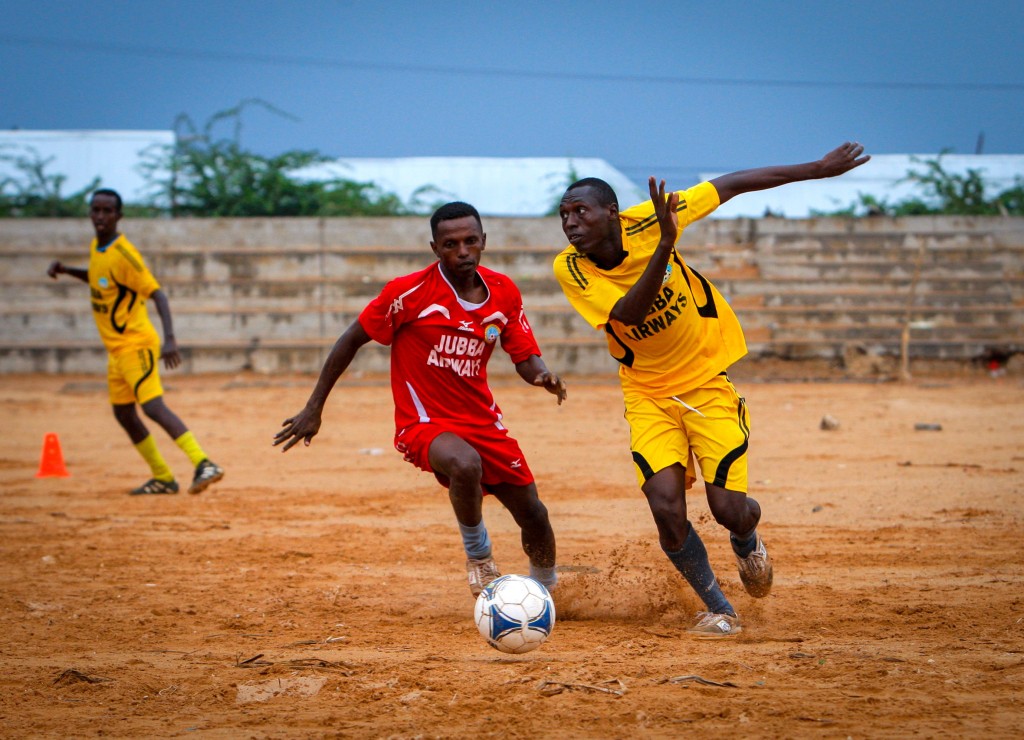 After two decades of near-constant conflict, Somalia is enjoying its longest period of peace and growing security since the Al-Qaeda-allied extremist group Al-Shabaab was driven from Mogadishu in August 2011. Under the Shabaab’s rule, social pastimes and sports such as football were banned, but residents in areas liberated by the Somali National Army (SNA), supported by troops of the African Union Mission in Somalia (AMISOM), are now enjoying their freedoms once again.
In this photograph released by the African Union-United Nations Information Support Team, players of Elman Football Club challenge for the ball during a training session at their grounds in the Hodan District of the Somali capital Mogadishu. They will be defending their championship title when the new season kicks off in March. (Jan 2013)

Andrea Hall graduated  from Wilfrid Laurier University with a BA in History and Global Studies and is currently a radio producer for CBC News. Her blog series, ‘Women in War’, examines the challenges and opportunities facing women in contemporary Somalia.