Stepping Back Into Time: A Meeting with Arthur Manuel Hall

I can still remember exactly the way my stomach dropped when I stepped through the gates into Sucrerie Cemetery. Arthur Manuel Hall is the only soldier I knew anything about before arriving in France and he is buried there. 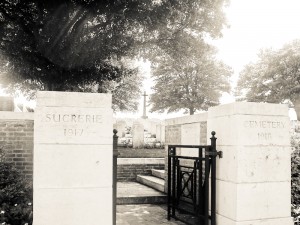 I came on the Cleghorn Battlefield Study Tour with limited knowledge of the two World Wars and had certain expectations of what I would see and feel. I would stand in awe as I stared up at the Vimy monument. I would picture the men rushing the beaches while my toes wriggled in the sand at Juno. I would stand amidst thousands of graves and probably cry.

We did spend a lot of time at a lot of cemeteries. But honestly, the ones that held thousands of graves probably drew the fewest tears. It’s overwhelming and I found it hard to emotionally connect. The sun glints off the white stone, the French countryside rolls green all around you, and you gaze at the sea of tombstones belonging to people you know absolutely nothing about.

But I knew Arthur.

We aren’t related but I’d gotten to know him in the weeks leading up to the tour. We each had to share one soldier’s story with the group, and I chose Arthur because of our shared last name and hometown. So I knew he was born in England to Henry, a labourer, and Mary, a dressmaker. He later moved to Kitchener, Ontario with his wife Helena and worked as a tinsmith. I knew he lived on Water Street with his seven kids. The two oldest, Arthur Montague and Frederick, also fought in the First World War. And I knew he was the only one in the family who didn’t come home.

I was the first one in our group to reach the gates of Sucrerie Cemetery, but I hesitated before entering. His tombstone would be my first encounter with something tangible of Arthur – he wouldn’t just be a story, he’d be buried beneath my feet. A wave of nausea washed over me as I knelt in front of his grave and traced his faded name with my finger.

This was the moment that war became real to me.

Of course I think of Arthur on Remembrance Day. But I also think about him in May when he was born. I think about him on December 9, the anniversary of his death in the trenches. This December will mark 95 years. And on some days in between I just think of him for no reason at all. 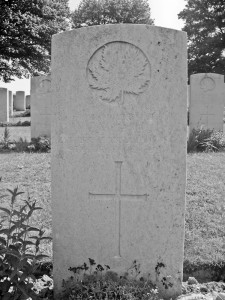 As it turns out, what comes to mind when I reflect back on the tour isn’t the great monuments or the sprawling cemeteries. It’s the little things that tell individual stories. Jack Anderson’s grave in the yard of a family home in Buron, France – the padre survived the war and when he died in 2004, wanted to be buried overseas with his men. 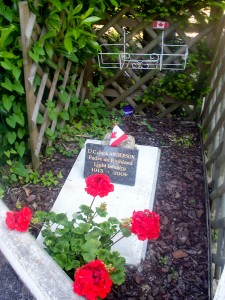 *editor’s note* This grave no longer sits in the backyard. The house was sold shortly after Andrea visited and where the remains now sits is unclear.

The epitaph that read “He sleeps beside his comrades. His grave I may never see, may some kind hand.” 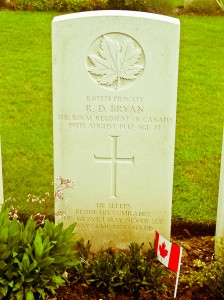 The Vimy monument was beautiful and imposing, but in my mind it pales in comparison to Arthur’s weather-beaten tombstone.

Andrea Hall participated in the 2009 Cleghorn Battlefield Study Tour, graduated from Wilfrid Laurier University with a BA (Hist) in 2010 and in 2012 graduated from Humber College with an Advanced Diploma in Journalism. She is now a freelance journalist in Toronto and will be writing a monthly post, starting in January, on Gender and Warfare for canadianmilitaryhistory.ca