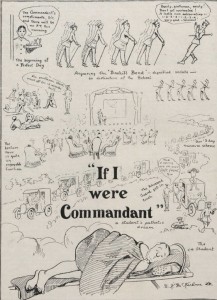 On 1 May 1916, nearly an entire Canadian Infantry Battalion suddenly disappeared without a trace while resting in their billets. They would not be seen again until the next morning when they mysteriously reappeared during roll call. When probed about their whereabouts the day prior, the men could not explain what had happened to them. Some had no recollection whatsoever, while others insisted that they were in their billets the whole time. “Where had they been” the Listening Post probed? One theory proposed a sinister explanation: “Was this the result of another German plot? Had the Huns discovered a new frightfulness by which they could hypnotize troops by hundreds?”[1] This article, like most in the trench newspapers, was meant to be satirical. According to the writer, the soldiers, after receiving their pay that morning, had vanished when it was announced that all men were to report to their working party. Any soldier who read this piece would have gotten the joke rather quickly since “rest” behind the lines often involved hours of busy work meant to keep the troops active. Drills, parade, digging, and other physical labours were the subject of many complaints and jokes from the soldiers. In this same issue of the Listening Post, under the headline “Things we hear that don’t happen,” was the quip “The Division is going out for a rest.”[2] In a more serious jab at politicians back home in Canada, one writer pronounced:

…“graft patriots”, when found out, should be sent out here to build wire entanglements, carry and place explosives in mines, carry all rations and ammunition to the fighting men, and, further, in their spare time from the first mentioned jobs might be allowed to do all sanitary fatigues, thus giving the real fighting men a chance to get a well earned rest.[3]

As mentioned in the last post of this series, reading and writing was one response to the boredom and monotony that could accompany life in the trenches. As one soldier commented, reading material was in demand because “we long for something lively, to prevent us from becoming melancholy.”[4]

The troops also required a semblance of normalcy and fun in the dreary and miserable atmosphere of war. In addition to the books, trench journals, and magazines supplied by the canteens, YMCA, and Church Army huts, was the importance of sport and concert parties. Sport was so popular among the troops that it was even practiced in the most dangerous areas. According to J.G. Fuller, even on the Gallipoli peninsula, which was constantly in threat of shellfire, troops managed to hold a soccer tournament and on the night before being evacuated from “Shell Green” the Australians played cricket.[5] The popularity of football across the various theatres of the British war effort is hardly surprising given that a majority of the British divisions were composed of civilians who brought with them facets of working class culture. After hours of working in the trenches or behind the lines, it was only natural that the men would resort to playing football when the opportunity arose, just as they did back home after a hard day’s work. What was surprising was the extent of organized sport and the administrative and material support provided by officers and higher officials. Inter- and intra-battalion football, cricket, and baseball competitions were held to crowds of sometimes thousands. High command even instructed their officers to make sure the necessary supplies and space were allocated so the men could engage in recreational sports. By June 1917, the 1st Canadian Division had nine baseball fields, three football fields, tennis courts, a basketball “court” and even two boxing platforms. Motor cars were even arranged to transport men to the big championship matches.[6]

This level of encouragement was not immediate. Haig expressed concern that the amount of time men were spending engaging in sporting activities would drain their energies and distract them from the task at hand. However, British and Dominion command increasingly recognized that it could be beneficial for morale, physical exercise, and building camaraderie, especially between officers and their men.[7] The No. 1 Canadian Field Ambulance, for example, was granted permission to put together an official football club in early 1916 by their commanding officers with a warrant officer, captain, and private serving as president, vice-president, and secretary respectively. This diffusion of rank represented to the Iodine Chronicle an example “of the democracy of sport” as well as official recognition by authorities that sport could be both good for the men’s spirit and physical fitness:

When Rudyard Kipling wrote his little lay about ‘Muddied Oafs’many years ago, he didn’t realize in those days of pipe clay, drill and still more drill, that football, baseball and the other games of ball do more to keep Tommy fit and contented than all the route marches ever invented.[8]

Sports were preferable to drill, training, parade, trench work, and work parties. The No. 1 Field Ambulance’s team seems to have originated ad hoc in 1915 before it grew in popularity and gained official recognition in the New Year. By October 1915, the men had already played matches with the 64th Battery R.F.A., 62nd Battery R.F.A., Highland Light Infantry, 1st Canadian Divisional Mechanical Transport and 1st Divisional Engineers.[9] This seems to have been a general pattern, as the Canadian Scottish 16th Battalion had put together matches in 1915 using only a whistle and a ball, but by February 1916 were able to join an organized league thanks to proper supplies and official support.[10] Such encouragement allowed battalions’ sports teams to become more inclusive, sometimes expanding beyond a single team.[11]

Nor did one have to directly participate in either concert parties or sporting events to be entertained by them. Those who could neither play nor attend could nevertheless read accounts of the matches and concerts in the appropriate trench papers. The various motives of the trench press: to entertain, build camaraderie, and document a history of the battalion in France, made them an appropriate place for this lighter more “normal” side of trench life. These were often very detailed accounts that could transport the reader’s attention from the Western Front to the more homely and familiar theatres of game and music, as the following partial description of a Y.M.C.A concert in the Listening Post demonstrates:

Once again the big Y.M.C.A. tent was the scene of a splendid Evening’s entertainment….

Hostilities commenced with a band selection—‘Water, water everywhere but not a drink in sight.’ We knew it, in fact we could feel it form our knees downwards. Sgt. Clarke of the 10th Battalion then gave us a highly interesting 15 minutes whilst he argued the point with an imaginary German…through an imaginary telephone.

The next item was a comic song by our ever popular Sgt. Mc Vic. Needless to say his song met with hearty applause, which would make Charlie Chaplain green with envy.

Capt. Whiteman of the 10th Battalion gave the boys a real treat when he sang ‘Mary of Argyle’ and the encore ‘There’s a Land,’ took a big load off our minds as most of us had seen nothing but water for weeks.

The comic songs of Pte. O’Neill were the cause of a big sick parade next morning.

The next artiste, Drive Place of the R.C.H.A. gave us something new in the line of hand-cuff tricks…

Those of us who were strong enough to stand Pte. Skinners’s version of ‘Where the River Shannon Flows’ had the choice of almost any seat in the house long before he had finished the first verse….

Private Lamont’s jokes and songs were just as welcome as they were the first time he sprung them on us (Last Fall)….

The last but not least turn of the evening was a demonstration of bloodless-surgery and hypnotism by Driver Place. …

The Brigade Band played popular pieces which were enjoyed by all. Thus what proved one of the best concerts ever held by the 7th Battalion came to a close by all heartily singing ‘God Save the King.'[12] 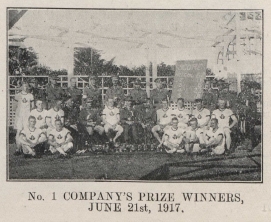 These reports not only provide full details of the performances and performers but also worked in friendly jokes at the expense of others. With comments such as “was met with hearty applause”—a statement that can in one form or another often be found in these very frequent editions to the trench newspapers—it is also evident that the men genuinely enjoyed such productions and actively engaged in them as audience members.

Given that these summaries of games and concerts were so common, it is no wonder that trench newspapers remain valuable sources to understanding how soldiers coped and sustained morale in the environment of the Western Front. As Fuller has pointed out, the concert parties resembled in tone and production the music halls of the British and British Dominion homelands. But the men did not perform in real Coliseums or Hippodromes, or real baseball diamonds and football fields. Despite the transference in spirit and design of these cultural norms and aspects of civilized society, they were nevertheless conducted in the shadow of the Great War. During the above Y.M.C.A. concert a power-outage spread fears of a pending Zeppelin attack, sending some members of the audience into momentary hysteria. The reminder that one was at war was never too far away. One feature of the frontline press was the ways in which writers identified this fact of imagined versus real. In the next post, I will examine how the environment of the Great War merged with the culture of home to make sense of this alien environment, make light of certain misfortunes, and attempt to live day-to-day in the trenches.

Kyle Falcon is a PhD candidate from Wilfrid Laurier University. His dissertation will focus on the ways in which the paranormal and psychical research was part of the Great War’s battlefield and homefront experiences as well as the war’s cultural memory in Britain and Dominion nations.