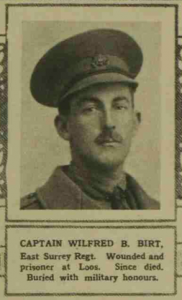 Detail of “For King and Country: Officers on the Roll of Honour,” Illustrated London
News, June 3, 1916.

Martin Gilbert describes the Great War battles of 1915 as “the continuing failure of the Entente.” John Keegan examines that same year in a chapter entitled, “stalemate,” and Stuart Robson—mincing no words—calls 1915 “badly planned disasters.” The Battle of Loos, from September 25 to October 8, 1915, was one such disaster.

At Loos, soldiers of the British Expeditionary Force attacked in ten columns, making it easy for their German adversaries to mow them down with numerically superior machine guns. The Germans became so nauseated at the scene, they stopped shooting over the “Field of Corpses of Loos” to allow the British to collect their dead.

Amongst the more than 8,000 British casualties was Captain Wilfred Beckett Birt. Although he survived, he was taken as a prisoner to a German hospital in Cologne where he was cared for until the following April.

Wilfred Beckett Birt, born in 1880, was the first child of Frederick and Agnes Birt. Agnes died at the age of 34 around 1890 but Frederick provided a comfortable life for his children as a shipowner and importer of goods. Wilfred Birt married Veronica Cecil Marsh in September 1910.

Birt enlisted in October 1914 and served as a Captain of the 9th Battalion A Company. As a POW he was taken to the Kaiserin Augusta Schule hospital where he is said to have been greatly liked and respected by fellow prisoners and hospital staff. In his 1918 book, The Better Germany in Wartime: Being Some Facts Towards Fellowship, Harold Picton states,

The great affection in which he was held by friend and foe alike showed itself in the mourning over his death, which took place a few days ago. His wound, a short time before, had shown improvement, but the heart was no longer equal to the terrible strain. Those of his comrades who were not confined to bed rallied around his coffin yesterday, which had been put upon a bier in the hospital garden surrounded by flowers and palms.[1]

Birt’s death and subsequent funeral were reported in the Surrey Advertiser that May, and was again later mentioned on August 26th. 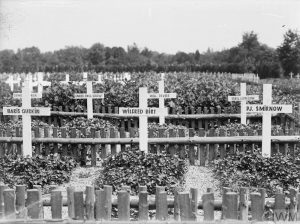 My first glance at Birt’s funeral came when I was an intern at Library and Archives Canada Gatineau Preservation Centre. My supervisors knew of my interest in war photography and sent me to view collections at the 395 Wellington location or simply had material ordered up from the vaults and delivered to my workstation. The object I viewed was a gelatin silver print, likely toned in gold that turned the object rich purple and brown. The subject showed men gathered at a funeral, but I did not yet know or even guess at any deeper meaning. I snapped a photograph of the beautiful object and continued working.

A year later, I was elbow-deep in the Art Gallery of Ontario’s collection of First World War albums. Sifting through pages of British photographs, I found seven prints of a funeral—the same scene I had found a year before. This time, they were printed in stark black and white—the type we see with printing papers invented after 1950, with the addition of optical brightening agents to make whites white, rather than brown or yellow.

After some digging on the Imperial War Museum’s website I learned that the images showed Wilfred Beckett Birt’s funeral and that it was photographed by a German photographer. The negatives were somehow shared with British official photographer John Warwick Brooke and reproduced to join the collection at the Imperial War Museum. This accounts for five photographs (Q 7727-7731) in the IWM collection. There is another photograph in the collection that was acquired through a different source (Q 79433), but is a duplicate print of Q 7730, meaning the IWM holds six photographic objects showing Birt’s funeral.[2]

Harold Picton’s (likely third-party) account tells us that Birt’s funeral was attended by other prisoners of war and hospital staff, but the IWM catalogue listing for the duplicate image, Q 79433, lists Paul Von Hindenburg as a funeral attendee. And, in fact, amid the sea of pickelhaubs, we see a portly man with a fierce moustache and striped pants.[3] He is not mentioned in Picton’s account of the funeral or in the collection of Birt’s personal papers housed at the Surrey History Centre in England.

What could have made Birt so important that his funeral was attended by those men whose profession was finding innovative ways to kill him and his comrades? According to the rules of the Geneva Conventions of 1898 and 1907, prisoners of war were to be afforded certain basic human rights—including the stipulation that wounded prisoners should be treated with similar medical care to one’s own wounded. However, it was unusual for a prisoner to be afforded this level of fanfare during his interment behind enemy lines.

Historian Florian Schnürer points out that wartime funerals were sometimes publicized for political or propaganda purposes. Schnürer’s analysis focuses primarily on the funerals of famous pilots—most notably, that of Manfred von Richtofen, whose funeral was conducted on enemy soil and attended by British, French and American airmen.[4]

Birt—though admired by those who met him—was hardly as famous as the Red Baron. And yet, variant photographs of Birt’s funeral could be found at LAC, at the AGO and at the IWM—Brooke had gained access to the German photographer’s negatives, as had someone else who deemed it important to make more copies of the photograph some 30 years later. Brooke also photographed the captain’s grave in Cologne in 1919—though it is unclear whether this was before or after he reproduced images of the funeral from the original German negatives.

It is possible that Birt’s funeral provided a propaganda opportunity to indicate Germany’s supposedly humane treatment of Entente prisoners, though it is also possible that Germany’s military elite identified him as a gentlemen. What is most likely of all is that Birt will continue to represent that ongoing trip down the rabbit-hole that is academic research. 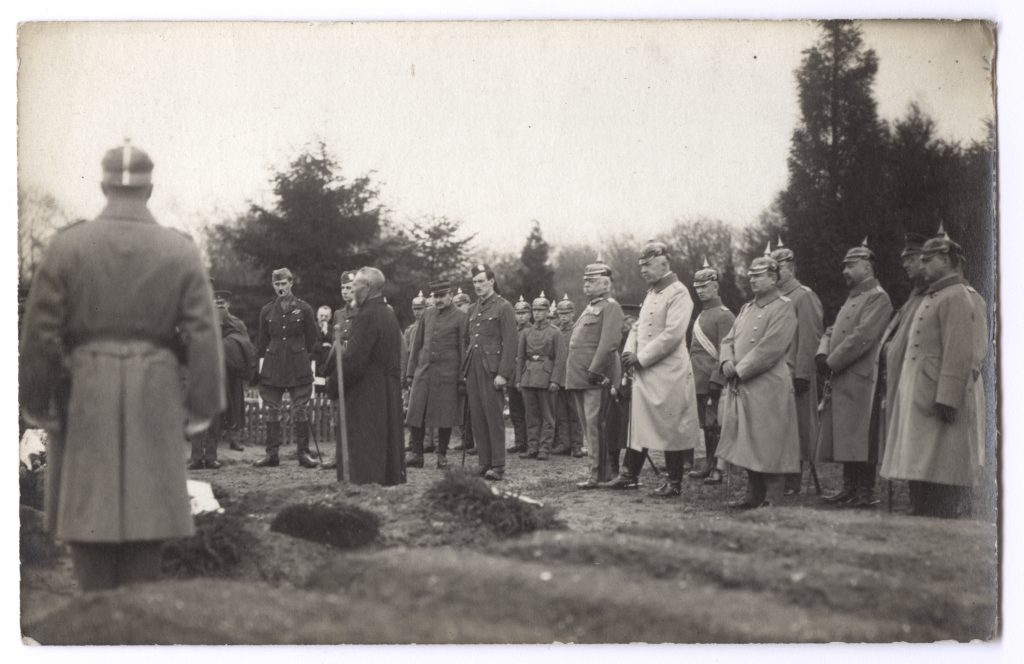 A photograph of the funeral has joined a new collection: my own. Through a routine session of cruising for war photographs on eBay, I found a real-photo postcard described as “Prussian First World War Funeral.” Clearly, the previous owner—like myself in 2014—did not understand the scene portrayed. I scooped it up for $12.

Carla-Jean Stokes has a Masters of History from Wilfrid Laurier University, as well as a Masters of Photographic Preservation and Collections Management, from Ryerson University. Carla-Jean won the 2015 Photographic Historical Society of Canada thesis prize for her paper, “British Official First World War Photographs, 1916-1918 Arranging and Contextualizing a Collection of Prints at the Art Gallery of Ontario.” Her special collector’s edition, “War Photos,” was published by Legion Magazine in May 2016. She works as Curator of the Historic O’Keefe Ranch, in Vernon, BC.

[1] Harold Picton, The Better Germany in Wartime: Being Some Facts Towards Fellowship, (Manchester and London: the National Labour Press Ltd., 1918), 147; funeral described 146-8.

[2] In archival collections we normally refer to this as a “variant” print, rather than a duplicate. Q 7730 is shown here as an example; Q 79433 is not shown due to differing copyright restrictions.

[3] Geoffrey Spender, Assistant Photograph Curator at the IWM was kind enough to answer my inquiry about Hindenburg’s mention in the photograph. He affirmed that the IWM’s best guess is that the donor identified him in the image.