In my last post, I talked about how “big” data can transform a military historian’s perspective. The caveat is that data analysis can be extremely dry and boring: after all, statistical charts and tables are part of the reason that quantitative history does not top the bestseller lists. So part of using data is presenting it in a way that is easily accessible, and easily understandable.

Data visualizations are nothing new: pie charts, bar graphs, and line graphs are all common and useful ways to process numerical data. These charts and graphs have been used by historians for many years. But the difficulty of a static, printed pie chart or bar graph is that the information behind the graph is not easily accessible and cannot be manipulated by the viewer in order to look at the data from other angles. Now digital tools exist that allow us to create dynamic, interactive charts and graphs, giving viewers the opportunity to not only see the underlying data but also to manipulate the data themselves.

Perhaps one of the most promising uses of visualization is in the creation of networks. Network analysis has taken off in the humanities over the past several years, as historians have shifted their focus from strictly nation-based analyses to more fluid patterns of movement and migration across national borders. Though military history tends to be more national in its focus, networks can still be valuable tools of analysis. The theory behind network analysis requires more explanation than we have space for here, but we can still explore the possibilities of networks as a visualization tool.

A network is made up of nodes and edges. The nodes are specific people, places, objects, ideas–anything that can have a unique identity. The edges are what connect these nodes to each other. One of the more common network setups in the humanities is a correspondence network, where the nodes are people, and the edges are letters written between those people. So, for instance, a letter written from Isaac Hull to William Eaton would show up in a network graph as two nodes–Hull and Eaton–and one edge between them–the letter. The more letters, the larger and more complicated the network. It’s easy to simply make a chart of letters and their authors and recipients, but when the letters number in the hundreds, you simply cannot make all the necessary connections simply by looking at a chart. Here is where the visualization part becomes important. By drawing those nodes and edges as an actual network graph, we can more easily grasp connections that were illusory or veiled in the chart. 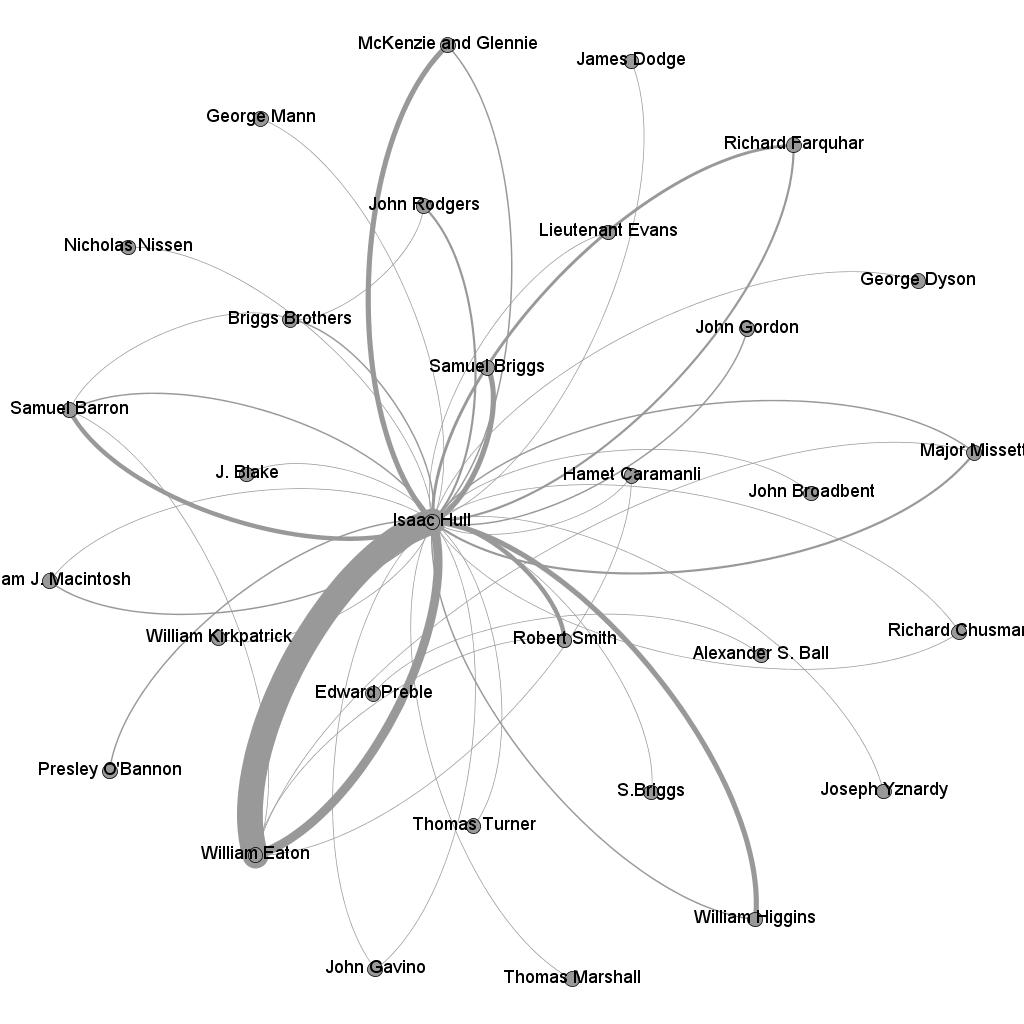 This is a construction of Isaac Hull’s correspondence network based solely on his papers in the U.S. National Archives. This is not a complete indicator of his connections, but it does give us an idea.

What networks show us sometimes is that military history is not distinct from diplomatic history, political history, or cultural history, but rather intertwined with them all. If for no other reason, this type of visualization is valuable because it allows military historians to enrich their own research by considering how it relates to other area of historical study.

Another type of visualization not new to the study of history, but enhanced by digital tools, is the timeline. Timelines allow historians to briefly and concisely view changes over time. One of the first books I remember reading about history was a timeline of the entire history of the world. But timelines don’t have to be simple event records. They can incorporate data, images, and even other types of visualization into a temporal line. Even visualizations such as Google n-grams or Bookworm are really timelines at their core: they track word usage over time, on a timeline. 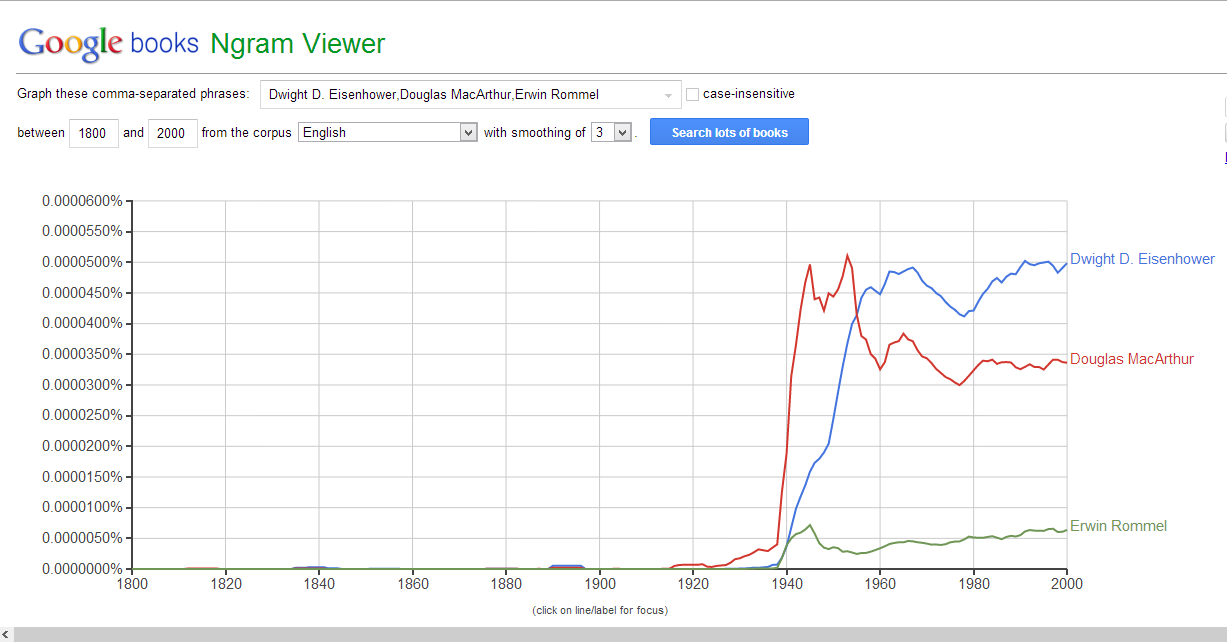 Data (as in the Google n-grams viewer) can also be combined with a more traditional event-driven timeline in order to draw out different angles for analysis. A great example of this type of hybrid timeline is the Chinese Canadian Immigration Flows visualization, which incorporates multiple layers of data, along with specific events that are important to the story of Chinese immigration into Canada.

Timelines can also be combined with maps. This type of hybrid timeline is especially useful for historians who deal with particular battles or campaigns. In this way, historical primary sources can be used to develop a story across both space and time. One great example of using timelines together with maps was created by David McClure to document the battle of Chancellorsville in the American Civil War.

Digital tools thus allow for interactivity and dynamic changes in timelines. They also allow multiple hybrid timelines to be created and even merged with each other to create a fuller picture of the events the timeline portrays.

One final type of visualization that I’ll just mention briefly here (it is the subject of the next blog post in this series) is mapping. There is, of course, more to mapping than simple geography. Thematic mapping, or layering data on top of maps to make spatial and cultural arguments, has been a mainstay of the historical discipline for many decades. Thematic maps are perhaps the most common form of data visualization, behind simple graphs. These visualizations have appeared in well-known atlases such as Charles Oscar Paullin’s Atlas of Historical Geography from 1923. Data can be visualized as discrete markers (such as in this map) or as colored or textured fields called chloropleths (such as in this map).

Recently, the University of Richmond demonstrated how even static thematic maps, such as those in Paullin, can be enhanced by digital tools. They digitized Paullin’s Atlas and added data (click on the map to see the data) and animations. These interactive features make an already valuable resource into a valuable and usable resource for many more historians than those who had access to a print Atlas. Maps are of critical importance for military historians, as even this atlas demonstrates with its section on military history, and digital tools can allow these maps to have an even more important function in our research and analysis.

So, to summarize: visualizations are nothing new to military historians. But they are underutilized, and they need not be. Digital tools can make visualizations more approachable and more analytically rigorous, Visualizations can be more than just pretty pictures: they can be effective tools to both open and answer new questions about military history.