Review of Susan R. Fisher’s ‘Boys and Girls in No Man’s Land: English Canadian Children and the First World War’ by Jon Weier

The last decade and a half have seen an outpouring of interest in and publications on the First World War, both in Canada and abroad. This has not only included histories and memoirs, but also a large number of fictional works, including dozens of novels written for children. (p. 250-51) At the same time, however, there has been a relative dearth of analytical works examining the experiences of children during the war. Susan R. Fisher notes that “children are rarely mentioned in Canadian histories of the First World War” and this is what she seeks to address in this book. (p. 3) While there has been little mention of the experience of children in Canadian studies of the First World War, historians have written about this topic extensively in other national historiographies. For example there are numerous monographs by George Mosse, Walter Laqueur, Detlev Peukert and others that seek to examine the experience of youth in Germany during the Wilhelmine period, through the First World War, and during the Weimar Republic. These works have been intimately tied to the various debates in German historiography over the rise of the Third Reich. This tradition continues, most recently with Andrew Donson’s Children in a Fatherless Land, a pedagogical history of Germany during the First World War. 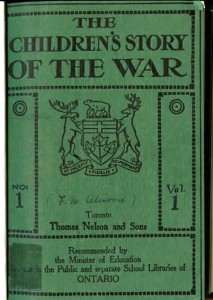 The Children’s Story of the War was a British publication produced under licence in Canada and widely distributed to Canadian schoolchildren during the First World War. (Courtesy: Canadian War Museum)

Fisher’s monograph is particularly welcome because it fills a significant gap in the Canadian literature. Aside from Mark Moss’ Manliness and Militarism: Educating Ontario Boys for War, which touches on the First World War as an end point in larger arguments about boyhood in late 19th and early 20th century Canada, this is the first recent book to deal with this topic. Fisher reconstructs the experience of children in wartime English Canada through an examination of literature aimed at and written for children. This is the focus of the second, lengthier, and clearly more central, part of the monograph, “Stories of War”. This section uses the literature written for children during the war, and in subsequent years, to show how children understood the war. It also shows how the literature was used to construct a narrative in which English-Canadian children were incorporated into broader themes – and mythologies – of the Canadian experience of war. Using similar materials Fisher, in her first section “Patriotic Training”, describes how children in English Canada were educated to take part in activities that promoted the war effort, and to see the importance and meaning of Canada’s involvement in the conflict. These wartime programs built on a long history in Canadian education of the promotion of ideas of British Empire identity through such resources as patriotic literature. 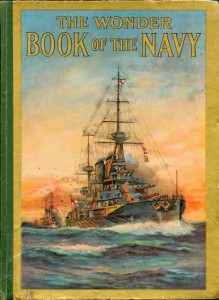 The Wonder Book of the Navy was an example of popular picture books designed for younger children. (Courtesy: Canadian War Museum)

The bulk of Fisher’s research and analysis is focused on the examination of children’s literature of the First World War. In an exhaustive exploration of children’s fiction, both contemporary and modern, of children’s magazines and newspapers, of children’s letters, and of school curricula and educational materials, Fisher creates a compelling narrative in which children become both a reason for war (to protect their futures), and active participants in the Canadian war effort. These sources represent a breadth of research that is exceptional, reflecting the viewpoints of English-Canadian children from all regions as well as the viewpoints of those who sought to create a place for children in the dominant narrative of war. As Fisher points out in the introduction, this book was initially planned as a comparative examination of First World War children’s literature produced during and immediately after the war, and writing produced more recently. This approach grew, in part, from an effort to see if presentism has become the defining characteristic of more recent children’s literature of the First World War. The project clearly evolved from these beginnings, but Fisher confirms that “the main emphasis… remains literary.” (p. 13) The thorough literary analysis is indeed the main strength of the book, which opens the door to further work on children’s experience and understanding of the First World War on the basis of other sources and methods. 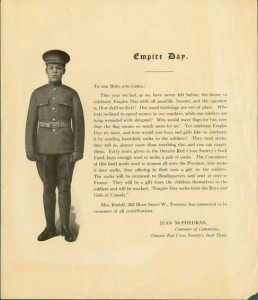 Empire Day, the brainchild of Mrs. Clementina Fessenden of Dundas, Ontario, sought to set aside one school-day each year for “patriotic exercises”. (Courtesy: Canadian War Museum)

The book’s concentration on English Canada is partly due to difficulty in finding and understanding literature from minority communities in this period. One result, it seems to me, is that Boys and Girls in No Man’s Land is situated in a historical mainstream that interprets Canada’s part in the First World War primarily through an Anglo-centric understanding of Canadian identity. That view always gave meaning to Canadian participation in the First World War – and still does – as part of a collective effort by the British Empire. This focus on the experience of English Canadian children unfortunately excludes the more difficult experiences of children not a part of the English-Canadian mainstream whose lives were often characterized by exclusion, shame and conflicted loyalties and identities. In one of the brief moments in which this work engages with a different understanding it discusses the ways in which aboriginal children, many of whom were living in residential schools at the time, engaged positively with the dominant understanding of the war, without seeking to problematize the inherent conflicts in the colonial and paternalistic relationship between English Canada and aboriginal children. French Canadian children, as well as children in the German, Ukrainian, or other communities who found themselves outside of the militaristic mainstream are not included.

Susan Fisher’s Boys and Girls in No Man’s Land is an important addition to a history, that of Canada and the First World War, in which the role of children is notably absent. Its thrust, however, is divided in its attempt to provide both a literary analysis of the Canadian children’s literature of the First World War and a more straightforward history of Canadian children’s experience of war.