Christmas in the Trenches: the Canadian Frontline Press and the Meaning of the Season

Christmas in the Trenches: the Canadian Frontline Press and the Meaning of the Season

This is a followup to three articles based on Canadian trench periodicals. See the following links to access: Part I, Part II, Part III.

The story of the Christmas Truce has been told many times. On Christmas Day 1914, men who had been sending each other bullets and bombs left their trenches to exchange pleasantries, food, souvenirs, and depending on who you ask, even played a game or two of football. As incredible as the story is, it was not to be repeated on the same scale during subsequent holiday seasons. So what was Christmas like the following years?  How was Christmas experienced and what did it mean, if anything, to those fighting a bitter war? Soldiers letters, memoirs and diaries are certainly a good place to start for such a discussion but this articles looks to another medium. Canadian trench periodicals, written by soldiers on the frontlines, offer a lively discussion of the topic given their duel purpose as a humorous escape from war’s realities and a forum for news and serious reflection. To be sure, they do not speak for every soldier and the variety of experiences, but they do offer an alternative to the popular Christmas Truce narrative.

The trenches of the Western Front were hardly an ideal place to celebrate Christmas. Putting aside the absence of amenities, décor and family, there was also a glaring contradiction with celebrating the birth of Christ in the environment of war, especially against fellow Christians.  As The Iodine Chronicle put it in December 1915, “The season of Peace and Goodwill is again upon us, and still ‘man’s inhumanity to man’ is what most strikes us.” A shared Christian culture was what allowed the Christmas Truce to occur, but every December that the fighting continued, it was a question that begged an answer. “While we are waging a relentless war, how can we consistently celebrate the Birthday of the Prince of Peace” the trench journal Another Garland from the Front asked in 1916? The answer they provided was that evil was a necessary product of free will and that Christians had a duty to combat evil crimes. “We must not,” they stated, “shut our eyes to possibility of crime, even such a crime as the ambition to subjugate the world.” The Iodine Chronicle reached a similar conclusion that “the sacredness of the cause makes up for this seeming inconsistency.”

Another Garland from the Front was a follow-up to the 1915 A Christmas Garland from the Front. The two journals, issued by the 5th Canadian Battalion, were conceived as seasonal gifts from the soldiers at the front to the Canadians at home. They had elements of a typical trench journal, containing short stories, poems, sketches, and overviews of the battalion’s actions during the war. Content could be satirical or serious but a subtle message was conveyed that the trials endured on the front was the ultimate Christmas gift. One poem, “For Home Consumption” reminded readers of their hardships by joking that “I love to hear the screeching of the shells a-tearing round about.”

Others made the point more explicitly. In the introduction to the 1916 issue of Another Garland, Arthur Currie asked those who read the journal to remember “the men who are daily laying down their lives in order that ‘Peace on Earth and Good Will among Men’ may once more prevail.” For one padre of the 7th Battalion the Canadian soldiers had likewise set an example worthy of emulation and optimism. After a “year’s discipline and trial…of great sacrifices,” he proclaimed, “our great Empire moved by this great Christmas wish will be mighty in bringing Christ’s peace on earth.” The holiday address to the No. 1 Canadian Field Ambulance in The Iodine Chronicle similarly invoked the sacrifice of the men as proof of Christmas spirit: “in this season of cheer…[w]e should also remember…our gallant comrades fallen on the field of hounour, those who have made the ‘supreme sacrifice’…have given the greatest proof of their love for their fellow men.” According to these commentators, the soldiers were not abandoning Christian values but protecting and demonstrating them.

Not all discourse was so serious. Trench newspaper were after all designed to be humorous, so as to distract from war’s brutality and sustain morale. Consider a column in the December 1915 edition of The Listening Post. “If Santa Claus had included any portion of the British Front on his programme,” it began, “we could see no earthly reason why he shouldn’t call at the business address of the 7th Battalion.” What was the author referring to exactly? According to the column they had spent the two days before Christmas decorating the trenches: “Pte. Allwood…had been persuaded to take his old socks off the barbed wire, and replace them with the new pair he had just been issued.” They had also doubled the amount of sandbags covering their trench so that German snipers would not kill Santa Claus. Such was the nature of trench newspaper where the low quality of life, the constant risk of death, and even the inappropriateness of Christmas decorations in the trenches were highlighted through satire. While some projected Christian notions of sacrifice onto soldiers to keep the Christmas spirit alive in wartime, others used irony to expose the farce. The not so subtle message was that despite the hardships that made a conventional Christmas impossible, the men had not lost their spirit. Perhaps this is a sentiment that can only be given justice through the trench newspaper’s typical dark humour: “Whizz-bangs, Krumps, Krumps, and such delicate attention have taught us most effectively that it is better to give than to receive.” 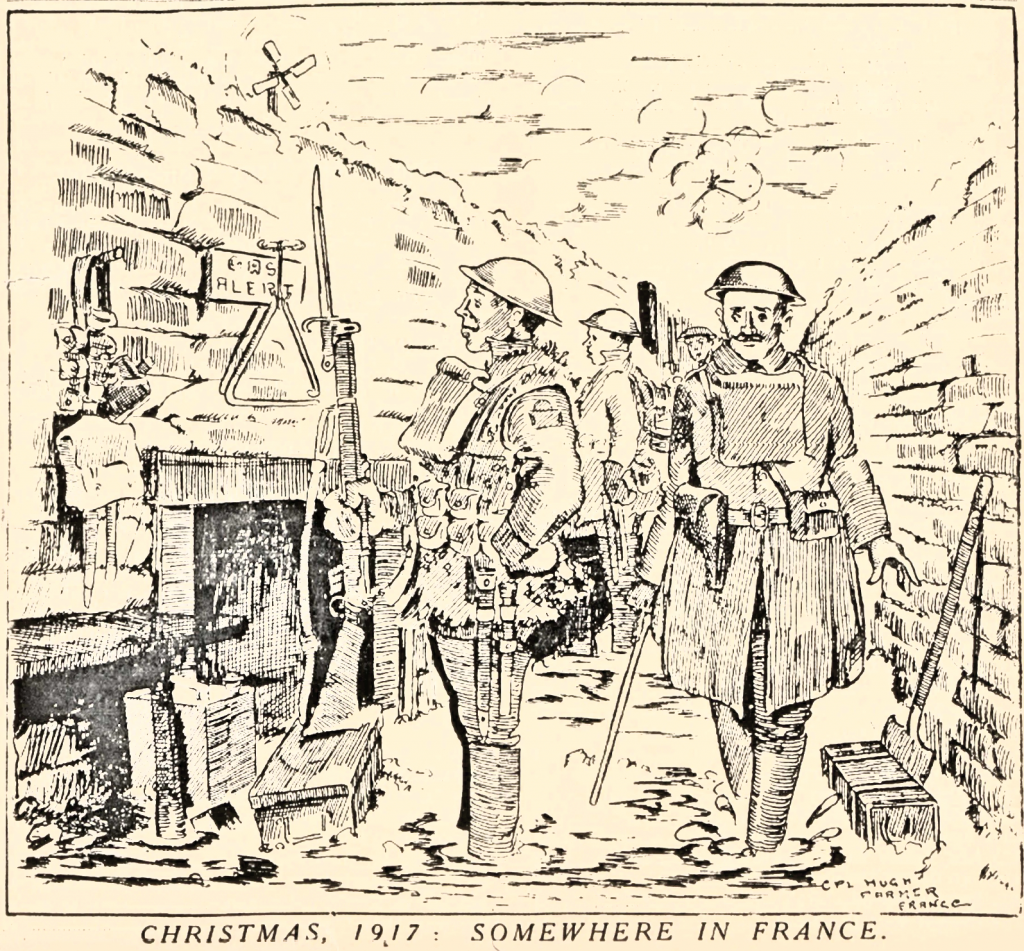 “Christmas, 1917: Somewhere in France,” by Cpl. Hugh Farmer highlighting the impossibility of celebrating a conventional Christmas in the trenches. From The Listening Post, No. 29, December 1, 1917.

If the spirit of the season could find expression in the face of conflict, so too could it be celebrated in the environment of war. All joking aside, some semblance of an ordinary Christmas could be had behind the lines. As The Listening Post noted, “Adaptability is a Canadian characteristic,” and so the men of the 7th Battalion were “prepared to celebrate Christmas to the best of their necessarily limited material resources.” With the use of a hut and a small stove, officers were treated to a Christmas dinner. After announcements by the commanding officer and a toast to Canada and the Allies there was a moment of silence to honour those killed, wounded, captured or back home. Non-commissioned officers and other men of the battalion were likewise treated to a Christmas celebration thanks to the Y.M.C.A. 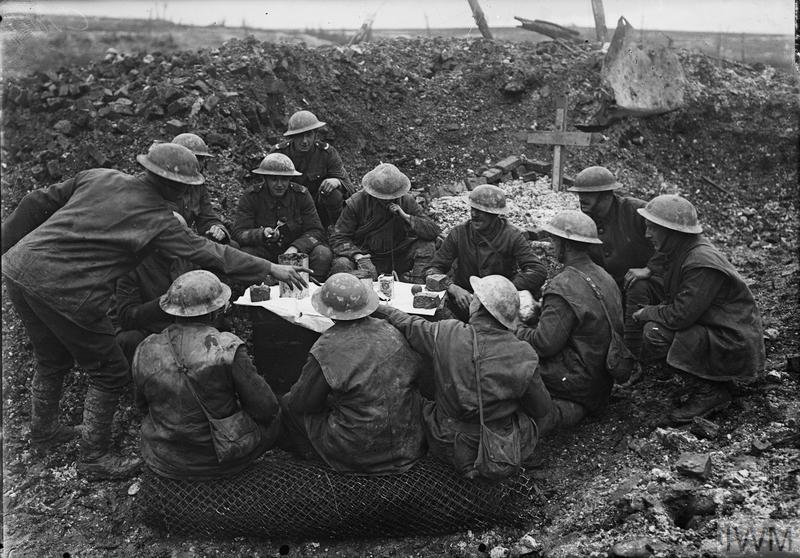 The No. 12th Canadian Field Ambulance described their 1917 Christmas festivities as “the jolliest time ever had in France.” Approximately 200 men gathered for a concert and feast. They were treated to theatre, music, sardines, toast and turkey, and the walls and ceilings were “camouflaged with cheery decorations” that mirrored the attitude of the men. “We were plentifully supplied with false faces, paper hats, whistles, tin-horns,” one writer recalled, “there was an unlimited amount of good humour and sparkling wit.” Some were able to escape to pleasant memories of home: “It sure reminds me of the kind [of turkey] mother used to make” was one such remark by a solider. The effort was enough to boost the morale of the men. As their journal, In & Out concluded, “We rolled into our blankets…mightily pleased with the day’s activities, and wishing that Christmas came more than once a year.” 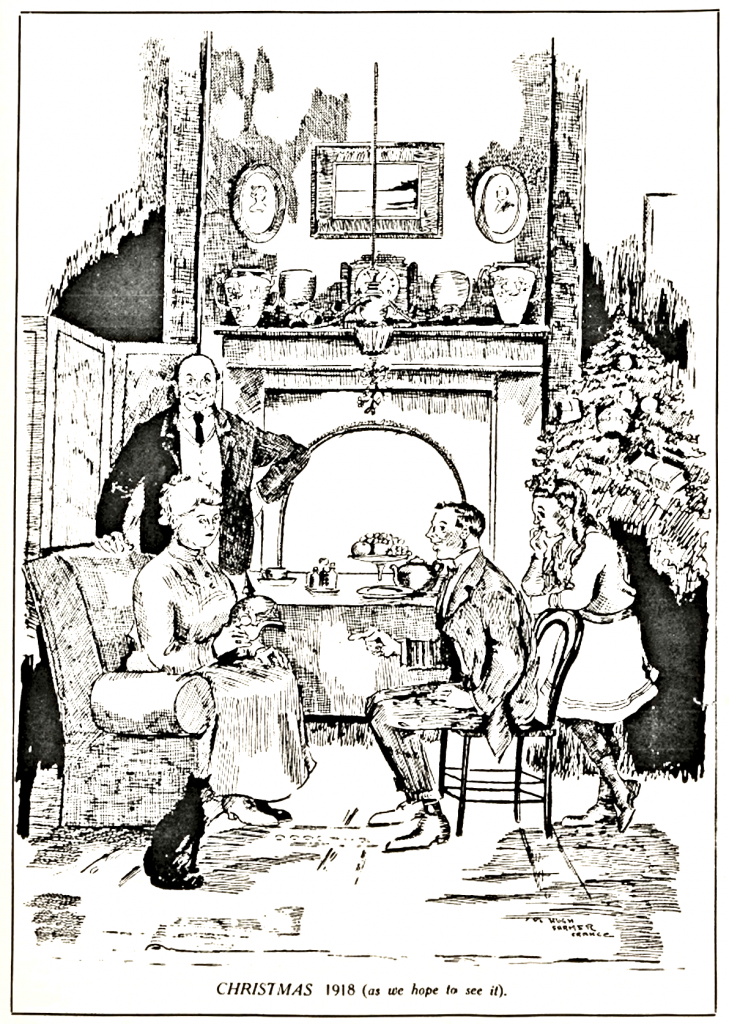 Not all men were lucky enough to enjoy such a setting on Christmas. Nor did every soldier possess the wit and literary gifts as some of the trench newspapers contributors. Nevertheless, these snippets show some of the ways in which a domestic holiday devoted to “goodwill towards men” could be reconciled in the environment of the Western Front, and in ways very different from the example set in 1914.