This is the third in a series of articles exploring how the Great War impacted the lives of a single family belonging to the MacKay United Church in New Edinburgh. See also Part I and Part II of the series.

George Frederick Stalker was the older brother of Robert A. Stalker. He was born in London, England, on January 18, 1877, the eldest of nine children of his namesake, eminent architect George Frederick Stalker and his wife Clarinda, who came to Ottawa in 1883. When George Sr. died suddenly in 1895 Clarinda was left with nine children. All four daughters died young of TB or respiratory disease. Clarinda was a member of MacKay Presbyterian Church and very active in its Ladies’ Aid.

George grew up in New Edinburgh, Ottawa, where he and Robert were active athletes. He also had two years of militia service with the 43rd Ottawa and Carlton Rifles. Since money must have been tight in the Stalker home, about 1901 the two young men left for British Columbia to seek their fortunes. George found work in the lumber business as an accountant and settled in the Kootenay region. He married Clara Belle Montgomery and they had three children.[i] In British Columbia he also did militia service as a Captain with the 107th (East Kootenay) Regiment.[ii] 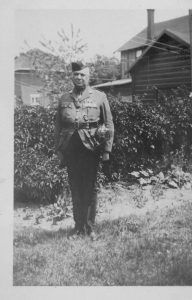 (George Stalker in his Cameron Highlanders militia uniform. Photograph provided by a descendant).

When war broke out George—as a 37-year-old with three children and a career—would probably have been considered unsuitable for overseas service. Nevertheless, he served from July to September 1915 as an internment guard with the 107th, presumably at one of the camps set up in the BC interior. Then in early 1916 he attended the Royal School of Infantry in Victoria for five months. By this time restrictions on recruitment had been relaxed and on May 19, 1916, George, now pushing 40, resigned his commission and enlisted with the 196th (Western Universities) Overseas Battalion, CEF. He was 5’ 10 ½”, ruddy complexion, with blue eyes and iron grey hair. Perhaps even more than with his brother Robert, we might well ask why a middle-aged man with small children was so eager for overseas service in what was by now well known as a dangerous war?

In joining the military George had also given up his employment. When his battalion was sent overseas in November 1916, George sent his family $20 a month from his pay and they also received a $20 separation allowance. But this would not have been enough, and Clara and the children (6, 4 and 2) had to find someplace to live where they could be supported by family. She and the children moved first to an apartment in Winnipeg and then, about December 1916, moved in with her mother-in-law, Clarinda Stalker, at 37 Charles Street in New Edinburgh, Ottawa. She would have been there when news was received of Robert’s death at Vimy Ridge in April 1917.

The 196th Battalion arrived in England on November 11, 1916 and was promptly broken up. On New Year’s Day, 1917, George was assigned to the 19th Reserve Battalion as a Lance Corporal. He was made acting Corporal but then reverted to the ranks to proceed to the front. On April 25, 1917, a little over two weeks after his brother’s death, he joined the 46th Battalion (South Saskatchewan) in the 4th Division, likely as a replacement for losses at Vimy. He may have seen action at Hill 70. He was promoted to Corporal on August 21, 1917 and Lance Sergeant the following day.

In the fall of 1917 the 46th moved to the Ypres Sector to prepare for the attack on Passchendaele. In the first of four set-piece battles, on October 26, the 46th Battalion had the difficult assignment of taking Decline Copse, a section of ground protected by trees and at least ten pillboxes, where attack could only be along a narrow front because of mud and water on each side. The Battalion pushed off before dawn under a heavy rolling barrage which offered some protection but further churned up an already porridge-like battlefield. Before long the men, slowed down by the mud, were easy targets for the enemy. The artillery support faltered as the guns kept sinking into the mud and fired short into their own troops, who were now being shelled from both sides. Only incredible heroism by some of the survivors enabled the 46th to take its objective. It was then exposed to heavy enfilade fire from both sides, and more heroism was required to hold the position until reinforcements arrived and they could then retire to a defensible line. At some point in this battle George Stalker sustained shrapnel wounds to his arm, shoulder, and back, the most serious of which shattered bones in his right hand.

George was evacuated to a field hospital and then to the No. 3 General Hospital in Le Treport, where his hand was X-rayed and the shrapnel surgically removed. His hand swelled up and for about a week he ran a temperature, but there was no serious infection. He was then evacuated to England and on November 6 he was admitted to Bath War Hospital where he recuperated and regained at least some of the use of his arm. On April 24, 1918 he was sent to the No. 13 Canadian General Hospital in Hastings for convalescence, until on September 20 he was discharged to Canada as unfit for further overseas service. After a short stay at the Queen’s Military Hospital in Kingston he was transferred on October 19, 1918 to the Fleming Hospital in Ottawa, the mansion of Sir Sandford Fleming, which his son and his wife had donated as a 71-bed convalescent home for wounded soldiers in the final stages of recovery. Here the military discipline of hospital life was relaxed and he could see his family during the day. Besides completing his medical recovery he received dental treatment including new plates, which appear to have been sorely needed.

(A page from George Stalker’s medical report upon discharge. From his CEF personnel file).

Following his discharge from active service on February 5, 1919, George stayed for a short time with his family at his mother’s home in New Edinburgh, then moved to another house nearby. He was taken on strength as a Staff Sergeant (later Quartermaster Sergeant) at the Corps of Military Staff Clerks at Militia HQ in Ottawa, in a records section dealing with pay, rations, discipline, and clothing. He bought a $200 Victory Bond. When this work was transferred to the civilian public service he was discharged as medically unfit on January 31, 1920.

Restricted movement of right hand – flexion off all fingers impaired – 3rd finger worse – extension of first finger impaired. Extension of the wrist beyond a straight line impossible. Flexion of the wrist to a radius of 30 degs from a straight line with arm. Grip of thumb and index finger fair, remainder poor, impossible to close hand beyond 1/4 of normal. Can use pen with restrictions.

But more than his physical wounds, Passchendaele had given Stalker at least mild shell shock. In one medical report during his convalescence he reported having trouble sleeping, and his medical report on discharge describes his state of mind: “Complains of inability to concentrate … Memory poor – pain in forearm when he tries to grip an object tightly. General condition otherwise good, other systems normal.”

After his discharge Stalker was transferred to the forerunner of Veterans’ Affairs to continue the work he had been doing at Militia HQ, and later served for twenty years in the Records Branch of the Department of National Defence, becoming head clerk. About 1921 he and his family moved into a modest but comfortable house in a neighbourhood that had opened up in Old Ottawa South, near the Rideau River and not far from where Carleton University is today. He became a prominent member of the St. Andrew’s Society and transferred his religious allegiance to become an active member of Holy Trinity Anglican Church.

In the 1920s, now approaching 50, he went back into the militia, joining the Ottawa Highlanders as a Captain and later reaching the rank of Major. He received the British War and Victory Medals for his overseas service, and was given a long service medal in 1930 when he retired from the active militia. He retired from the reserve militia on September 1, 1933, having reached the mandatory age limit. In May 1940 he took ill and three weeks later died on June 6, 1940 at the age of 63, his life probably shortened by his war injuries and experience. “Of a friendly and likeable personality,” read his obituary, “he enjoyed the respect and admiration of his associates, in the Government service and in military circles generally.”[iii] He was buried with semi-military honours in Beechwood Cemetery, Ottawa, with a number of military and ex-military men in attendance.[iv]

ALAN BOWKER served for thirty-five years in Canada’s foreign service, including as High Commissioner to Guyana. He has a PhD in Canadian history and has taught at Royal Military College. He lives in Ottawa. His latest book is A Time Such as There Never Was Before: Canada After the Great War. He has also edited two collections of essays by Stephen Leacock, whom he considers one of the most perceptive commentators on early twentieth-century Canada.

[i] Information, and the picture of G. F. Stalker, was provided by a descendant. It may be of him in later life in his militia uniform.

[ii] Information on military service is found in his service record and attestation papers.

[iv] The casket was draped at the funeral home and in the procession with a Union Jack, but no Last Post or volley at the cemetery. Ottawa Journal June 10, 1940, page 8, “Comrades of Last War Honour Memory of Major Stalker”